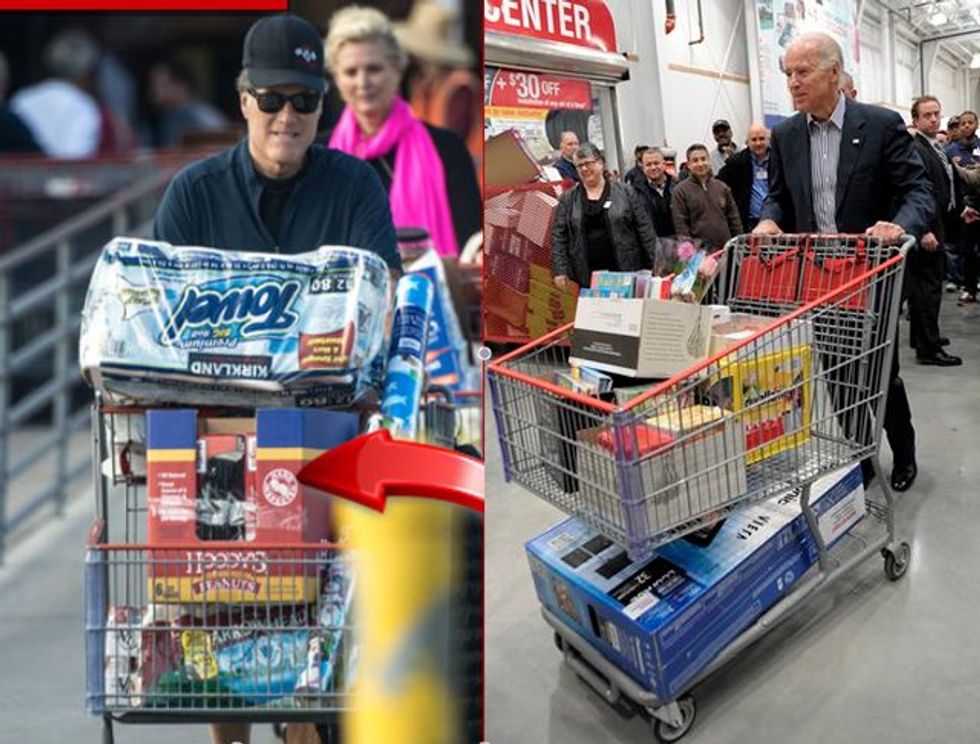 Hey, remember that Mitt Romney guy? Yeah, us neither, really, but apparently he was expecting to be president, since it was his birthright or something? And now, he's justwandering around in a sad daze, with only his hundreds of millions of dollars for company. Poor dude. So like any US American who's feeling a little down, he went shopping. And, apparently because he is something of a masochist, he went to CostCo, inviting mocking comparisons to Old Handsome Joe Biden, who recently pushed a cart around at the very same discount warehouse chain for the good of the economy.

The Atlantic's Alexander Abad-Santos notes the contrast between

the symmetry and perfect, Tetris-like precision fit that Biden's cart is sporting and the undulating cauldron of entropy on the left topped by generic paper towels

And much more to the point: "that hat." (It is an asshat wearing a hat!)

Needless to say, the Wonkette Secret Chatcave was ringing with mirthy schadenfreude:

"But the Costco CEO spoke at the DNC! Shouldn't Mitt go to Sam's Club?"

"He's all like, you won't see ME locking myself in the bedroom and crying all over Thanksgiving! Nope, I'm a man with offices to be at and Costcos to look weird in!"

"Costco is his version of Corey Booker's living off food stamps. The poor man just wants to connect."

"Is that Ann behind him? She looks like she is on Laura Bush style buckets of Valium and Luudes."

"Remember how Ann was worried about Mitt's mental health if he got elected?"

And so, we turn the snarkage over to You, the Wonkettariat: What's the next Joe Biden Signature Move we can expect Mitt to incompetently copy? Will Mitt decide to buy a bitchen muscle car, but end up honoring his dad by getting a 1979 AMX (or maybe a Gremlin GT)? Or maybe he'll pose with a biker chick, only her old man will punch his lights out?