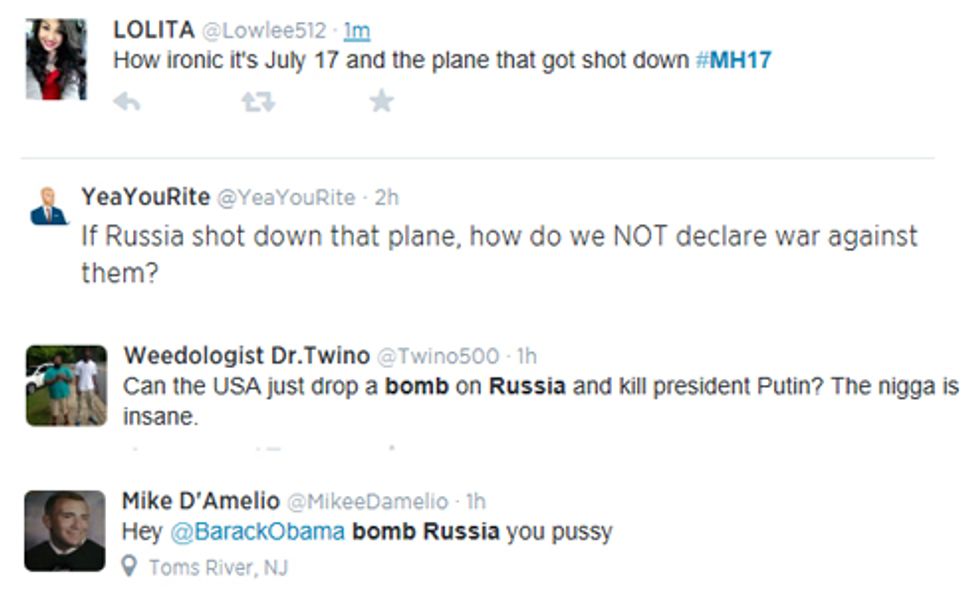 A Malaysia Air 777 has crashed, probably shot down by a ground-to-air missile, over eastern Ukraine today. We are still in the early "very little is confirmed" stages of this story, so get ready for all sorts of maybe-facts that are likely to become fodder for suspicion and conspiracy theories. At this point, it appears that Flight MH-17 from Amsterdam, headed for Kuala Lumpur, was downed by separatist militants using a truck-mounted missile which struck it at its cruising altitude of approximately 33,000 feet, and the crash site is about 25 miles to the west of the Russia-Ukraine border. 280 passengers and 15 crew were aboard. After the jump, we'll have video and some idiocy from the web. CBS News video:

Happily, before we even have all the details in hand, the Usual Suspects are jumping in to make sure that everyone is well-informed and keeping a calm head. Over on Fox's Outnumbered, Geraldo Rivera proclaimed,

“As a war correspondent, weighing all the facts as they’ve been coming in -- admittedly this is my opinion -- I believe Vladimir Putin has the blood of these airline passengers on his hands.”

God only knows, some people are going to say this makes the Russian Tyrant all the sexier. Geraldo also had this incisive analysis of what absolutely must have happened:

“The Russian leader has been supplying increasingly sophisticated weaponry to the pro-Russian anti-Ukraine activists in eastern Ukraine,” he continued. “There are reports sophisticated surface to air missiles have been spotted in that region. They is very little command and control from Russia’s point of view over those rebels in eastern Ukraine. I believe as I sit here today what happened is Russia supplied that weapon system so those rebels could shoot down Ukrainian helicopters and Ukrainian warplanes attacking them, and they saw this aircraft in the sky, these undisciplined pro-Russian Ukrainian rebels shot down the innocent passenger jet.”

We would also like to thank Mediaite's Evan McMurry from the bottom of our heart for noting that co-host Harris Faulkner replied, “You’ve said that several times.” Amen, Ms. Faulkner. The vegetable-enhancers over at Vox have an explainer up, and they leave absolutely nothing to chance. As Yahoo's Chris Moody notes, it's quite possible they don't assume that their readers are especially smart. Point 4 on their list of what we know and what we don't is:

This is not the same Malaysia Airlines flight that disappeared on March 8th. That was MH370; this is MH17.

The Russian RT network has some EXCELLENT speculation of its own, suggesting that maybe Vladimir Putin was the actual target of the missile, because he has a plane that flies over Ukraine when he goes from Moscow to Europe! Allegedly, Interfax News Agency got this hot tip:

“I can say that Putin’s plane and the Malaysian Boeing intersected at the same point and the same echelon. That was close to Warsaw on 330-m echelon at the height of 10,100 meters. The presidential jet was there at 16:21 Moscow time and the Malaysian aircraft - 15:44 Moscow time,” a source told the news agency on condition of anonymity. "The contours of the aircrafts are similar, linear dimensions are also very similar, as for the coloring, at a quite remote distance they are almost identical", the source added.

Just look at these two planes -- as if at 33,000 feet anyone would be squinting through binoculars and shouting "fire now -- I see him looking out the window!" Now obviously, if Putin was the real target, it must have been the Ukrainians who fired the missile, not Russia's separatist buddies. That's a good story, and we're sure it will get lots of traction. Somewhere. And of course there's the Twitter Dumbass Brigade: To his credit, one of these folks pretty quickly thought better of it: So far, we have yet to see any conspiracy theories positing that there was no "MH 17," and that this was in fact MH 370, finally disposed of by the shadowy conspiracy that hijacked it and cleverly disguised as a flight from Amsterdam. Or perhaps it popped out of a time warp. Or....