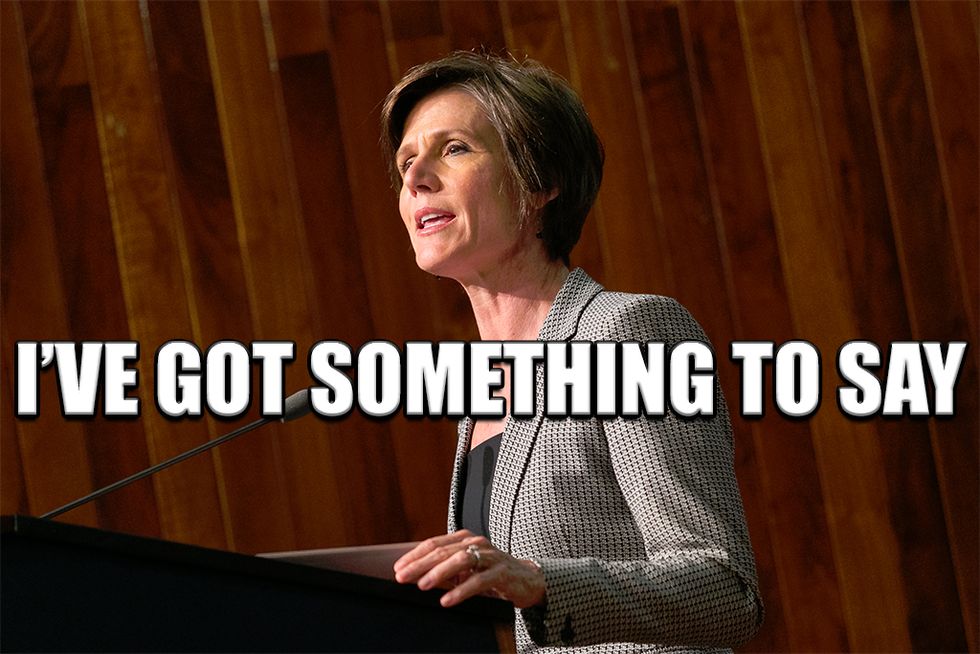 Everybody ready for some Senate-Judiciary Trump-Russia Sally Yates whatever-other-SEO-terms-should-be-here LIVEBLOG? US TOO! Even though it is Evan's day off and we're not sure it's even ALLOWED for us to handle the midday-drunk-typing, and also we're gonna need a drink!

The question on everyone's lips of course, is will Donald Trump shit himself in rage, or in fear? Which shitting shall it be???

2:33 PM: Lindsey Graham opens the hearing by calling Russia "no good" about 50 hundred times and enunciating their manifold crimes against us. Did you know you shouldn't like Russia trying to fuck our elections EVEN if it helps Republicans? So weird. Oh yeah, "also we'll talk about unmasking, since my fellow Republicans are pretty sure they can turn this whole thing around to be a slam on sneaky evil wire-tappping Democrats, which they can't."

2:42 PM: Oooooh, Sheldon Whitehouse brings up Felix Sater -- a convicted felon with ties to the grand dragon poobah of Russian Mafiosi, who worked with Trump for YEARS getting Russian investors. Trump? Yeah, doesn't know him.

2:48 PM: James Clapper, former Director of National Intelligence, is testifying first. He said in March he'd seen "no evidence" of Trump Russia collusion. Now he will briefly address this 52-page list of topics. BRING US YATES YOU FUCKERS.

2:50 PM: James Clapper wants to remind you, Senator Lindsey, that although Putin hacked the RNC as well as the DNC, he declined to release any stolen Republican emails through his BFF Julian Assange at Wikileaks. (And don't forget Paul Ryan and pals in the House made good use of stolen emails from their opponents as well!)

2:55 PM: James Clapper says, approximately, "unmasking is fine Jesus Christ shut up about it you big fucking liars with your unmasking lies!" But he doesn't use exclamation points, because he is extremely ancient and a yell might kill him dead.

3:00 PM: I THINK James Clapper just said it was his bad that he pooh-poohed Trump Russia collusion, because he didn't know about the FBI investigation into just that very thing, but I don't know how to rewind my sister-in-law's TV, so we'll have to mark that "unproved."

And it's YATES TIME! She sounds like she could be played by Sandra Bullock doing her Texas "Blind Side" thang.

Yates says she ain't gonna say shit she ain't authorized to leak in public, or are part of ongoing investigations, she is a serious person of seriousness, not some kinda Republican shitbird.

3:06 PM: Dianne Feinstein: "Hey lady, what's up with the shitbirds in the White House? You see this crazy shit about President Bamz TOLD Trump not to hire the crazy dick?" (Direct quote.)

3:10 PM: Lindsey Graham: "Yo James Clapper, you still stand by that nonsense about no Trump Russia collusion?" Clapper: "Ayup."

Lindsey: "Same question to you, lady."

Lindsey: "The fuck you think is wrong with Clapper, Yates? Think he ain't know nothin'?"

3:11 PM: Lindsey: "Give us the dirt, Yates. Give us ALLLLL the dirt. The fuck was up with this grifter Mike Flynn?"

Yates: "I had a meeting with Don McGahn, the White House 'council.' Everything you ask me 'bout whether I unmasked this fucker is classified, never gonna tell you nope."

Lindsey wants to know if we'll be able to find out who unmasked poor, persecuted Mike Flynn, but moves on eventually. Yates "walked the White House counsel" through all the shit they knew about Flynn being a big ol' Russia-talker who was talkin' to Russia, and he'd been caught "lying" to Mike Pence. They were very clear that they weren't accusing Pence of lying to the public on purpose, heavens no!

Well, that's one of you, lady.

3:17 PM: Lindsey gets to the heart of this whole thing: Were Trump or his associates netted in incidental collection during the election? Clapper: Nah bro. Yates: Not tellin'.

3:25 PM: Yates: "To state the obvious, you don't want your national security advisor compromised by the Russians." Boy howdy nope!

3:30 PM: Chuck Grassley knows what is important, and that is that someone leaked THE TRUTH to the Washington Post, which meant that poor Mike Flynn didn't get to be NSA anymore :(

3:30 PM: Chuck Grassley: Did you request an unmasking of Mr. Trump or his associates?

James Clapper: As a matter of fact, lemme think about it, YUP SURE DID.

Here is what "unmasking" is and why Clapper is NOT GUILTY HOORAY!

You could do the whole Ron Burgundy "Go fck yourself, San Diego" prank by handing a piece of paper to Grassley. Please, someone, do that.