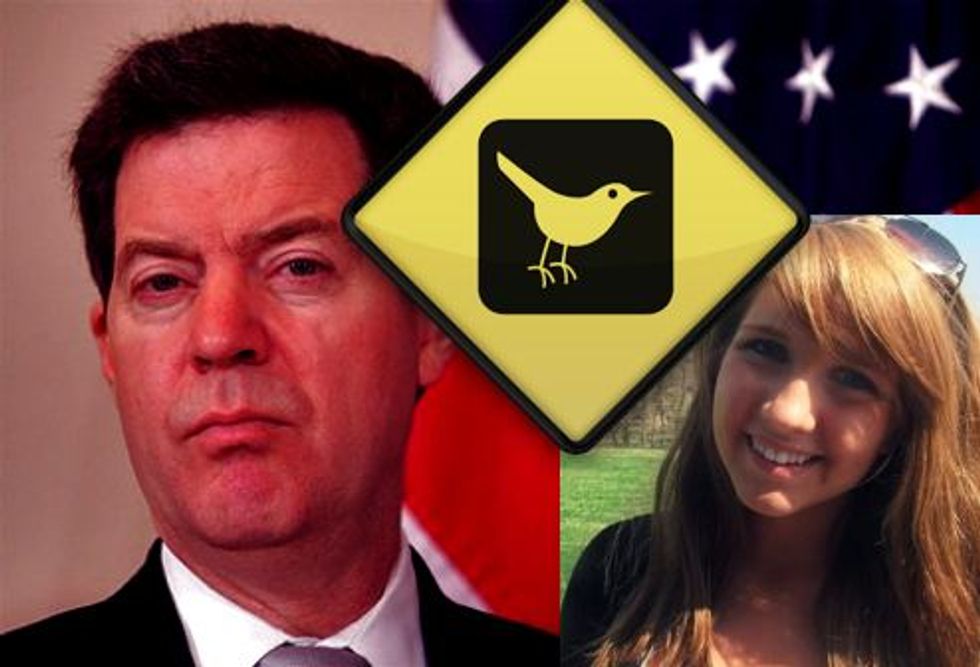 Not even Republican primary voters wanted Sam Brownback as a presidential candidate, so the right-wing nobody went back to Kansas, both metaphorically and literally. He'sgovernor of Kansas, apparently. And he's still a thin-skinned jerk. We learned these facts from the cautionary tale of Emma Sullivan, an 18-year-old high school senior and member of the Youth In Government program. (The tale is cautionary for state-level wingnut creeps like Brownback.) During a field trip to the state capital, Sullivan was annoyed by Brownback's dumb comments to the kids. So she wrote a joke on Twitter for her friends: "Just made mean comments at gov brownback and told him he sucked, in person #heblowsalot." And then Brownback's goblins found the joke online and tried to destroy this student's life.

She actually made no such comments. “Joking around,” Sullivan says of the incident. Brownback’s director of communication wasn’t amused when the tweet was spotted during the routine daily monitoring of comments on Twitter and Facebook mentioning the governor’s name.

“That wasn’t respectful,” responded Sherriene Jones-Sontag. “In order to really have a constructive dialogue, there has to be mutual respect.”

Brownback’s brief speech to the students encouraged them to “be active in their government, community and public service,” Jones-Sontag says.

Yeah, but Sam Brownback really does "suck," and really "blows a lot." This is well known, nationally, and to expect smart young people in Kansas to be ignorant of this fact is to want children to be born without brains.

The Brownback administration basically tried to have this girl killed, for making a joke about a thin-skinned politician, on Twitter. And now her school has been forced to force her to "write an apology," etc. Sullivan was already liberal (she's intelligent), but Sam Brownback has probably forced her to become a liberal leader.

A few weeks ago, she was tweeting about Twilight like teen-aged girls across America. But then she turned 18 and was targeted by a minor-league wingnut governor with a Napoleon complex, and we would not at all be surprised to see Emma Sullivan leading million-student #Occupy protests in the coming months. UPDATE: She refused to apologize, the school caved in, and Brownback apologized to her. [Kansas City Star/Twitter]