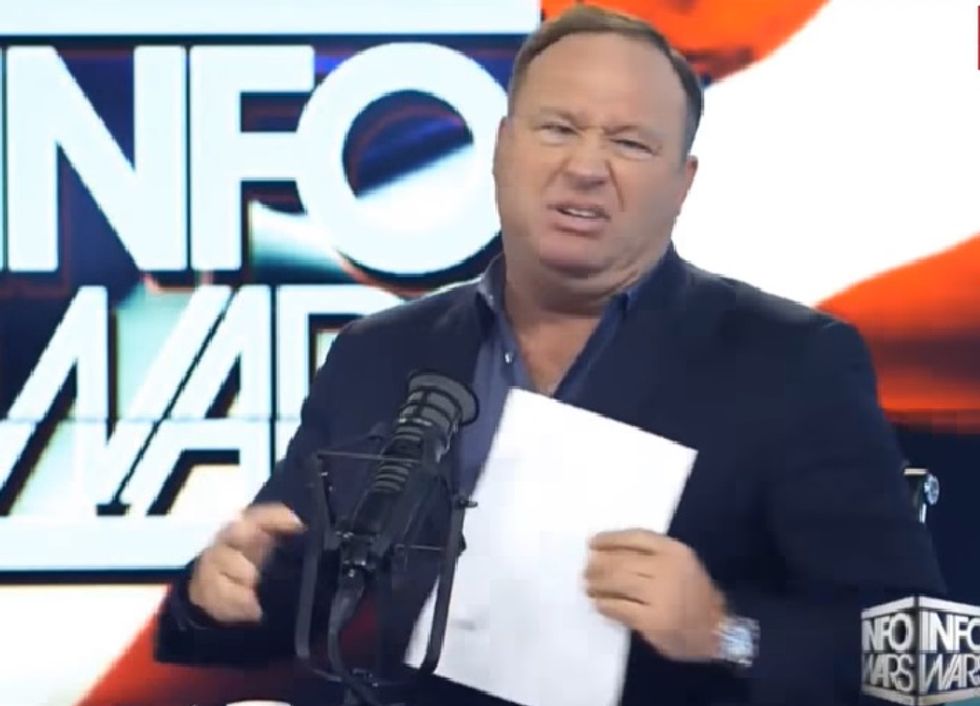 In December of 2012, Adam Lanza walked into Sandy Hook Elementary School and shot 20 children and six adult staff members. Since then, the parents of those children have had to deal not only with not having their children anymore, but also with the psychotic ravings of Alex Jones and others who believe that the whole thing was an elaborate ploy to take their stupid guns away.

For five years, Jones has pushed the conspiracy theory that Sandy Hook was a "false flag," that the parents who lost their children were all crisis actors who were paid big bucks by the government to just pretend to be parents who lost their children. Though it's far from the most absurd thing Jones has claimed, it's certainly one of the cruelest. After half a decade of putting up with Jones's nonsense, of dealing with death threats and harassment from his followers, the parents have had enough. And they are coming after Jones, his empire of crankery and his pile of snake oil vitamin money.

Father Neil Heslin and parents Leonard Pozner and Veronique De La Rosa, whose sons died in the massacre, have filed two separate defamation suits against Jones and Infowars for over a million dollars each. Also named in the suit is Free Speech Systems, LLC, the company that owns Infowars, and Infowars reporter Owen Shroyer.

As you may recall, Jones was sued last year by Chobani for claiming that they were purposely importing "rapists" to work at their yogurt factory, and was forced to issue an apology to yogurt and the good people of Twin Falls, Idaho, where the company is based.

The suit filed by Pozner and De La Rosa is centered on a Jones segment titled "Sandy Hook Vampires Exposed," in which Jones claimed that a glitch in a video of an interview between Anderson Cooper and Ms. De La Rosa "proved" that they were filming in front of a green screen and not on location at Sandy Hook, and thus that Ms. De La Rosa was actually a "crisis actor" and not a grieving parent.

Mr. Jones highlighted an interview that Ms. De La Rosa did with Anderson Cooper of CNN after the shooting. While they are standing outside a downtown Newtown building, Mr. Cooper turns his head to face her.

During that quick head movement, Mr. Cooper’s nose seems to disappear — evidence, Mr. Jones said, that the interview with Ms. De La Rosa was conducted in a studio. In reality, the glitch is known as a compression artifact, a distortion that is common in video encoding.

Wow! It is almost as if he could have solved the mystery of Anderson Cooper's disappearing nose by Googling!

The suit filed by Heslin is centered on comments made by Infowars reporter Owen Shroyer after Heslin's interview with Megyn Kelly for that Alex Jones special she did for NBC. “I held my son with a bullet hole through his head,” Heslin told Kelly during the interview.

"NOT POSSIBLE!" Shroyer claimed a week later, citing the fact that the parents had identified their children through photographs provided by the medical examiner, rather than in person -- which would have been a real swell point had the children's bodies not been released to their parents later. A month later, Jones doubled down on this theory, saying “The stuff I found was they never let them see their bodies. That’s kind of what’s weird about this. But maybe they did.”

Yes. They did. For the funerals. Because they were real children who died in a real massacre, and did not magically disappear into the ether after being fatally shot. Imagine that!

The lawsuits explain that the statements were not merely offhand one-time comments by innocent people who were simply mistaken, but rather "a continuation and elaboration of a yearslong campaign to falsely attack the honesty of the Sandy Hook parents, casting them as participants in a ghastly conspiracy and cover-up.”

Jones's theories have had serious consequences for the Sandy Hook parents. Leonard Pozner, one of the parents suing, had a Sandy Hook truther calling him up and threatening to kill him.

It's likely that Jones's defense, as it usually is, will be that he is just an "entertainer" playing a role, or that he was "just asking questions." Or pointing out "what's weird about this." He uses a lot of weasel words that allow him to make it look like he is only presenting these conspiracy theories as "things that are possible" and not things he thinks are 100% based in fact, with the intent of "letting viewers come to their own conclusions." Which they do, and they often "come to the conclusion" that the false narrative Jones is suggesting is, in fact, true.

This serves two purposes. One, it gives him plausible deniability for defamation suits such as this, and two, it results in people believing in his bullshit even more than they would if he were actually stating it as a fact -- because they feel as though they "heard all the facts" and are drawing their own conclusions, rather than just being told something. The best way to make someone believe something, especially if it is something very stupid and ridiculous, is to make them think it's their own idea. It's Brainwashing 101.

Ideally, this and the yogurt lawsuit will start a trend and everyone will start suing the pants off of Alex Jones and the rest of the conspiracy peddlers, because they need to be held accountable for their bullshit.