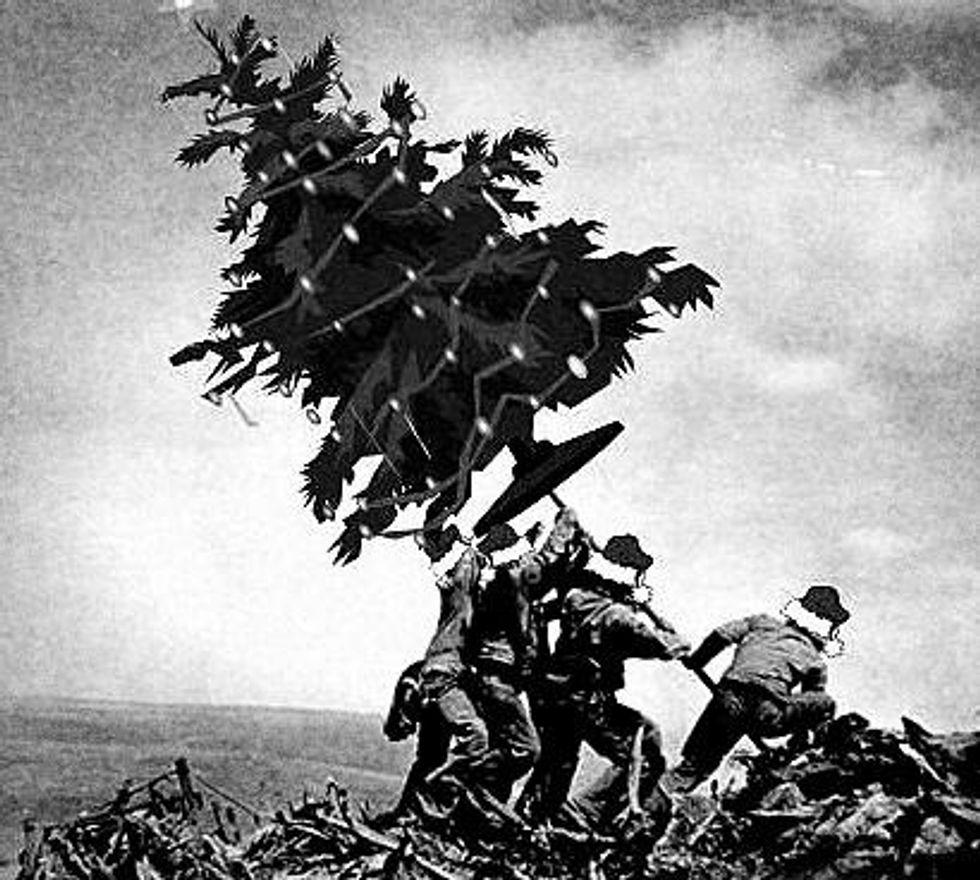 With all the torture and police brutality and Republicans taking over Congress, we were worried that the War on Christmas just might not come this year. Thankfully, though, just like Santa soaring through the fog, led by a Claymation reindeer, it's finally arrived, and Fox News's Todd Starnes will get to open up his brightly wrapped box of butthurt under the Kwanzaa Tree after all.

The most recent affront to all things decent and noble? The Peabody School, an elementary school in Cambridge, Massachusetts, didn't include Santa Claus in its holiday concert on Friday, and America just became a much sadder place to live. The jolly old cliché was sent packing after a complaint from a parent, and yet the concert was still apparently able to take place. Still, Santa will be included in a second concert, a family sing-along to be held Dec. 23. Principal Jennifer Ford advised parents in a letter that if they'd rather their kids not be at an event with the red-suited Coca-Cola sales icon, they could join her in the library for games and reading.

The Boston Globe asked Cambridge school superintendent Jeffrey Young about the attempted murder of Babby Jesus, but he seemed entirely too unworried about the assault on American Values. According to the Globe:

[Young] said he had been unaware of Santa’s absence at the Peabody, but was finding it hard to muster too much outrage.

“Our mission is around education,” Young said. “Santa’s not on the top of my list.”

This time of year, Santas aren’t exactly hard to find, Young noted. So he didn’t see the need to have the jolly old elf make a special visit to a public school, where many students don’t celebrate Christmas.

“I just don’t know why he has to be in the school,” he said.

Young also said he believed Ford handled the situation “in a sensitive and smart way,” but was more concerned about the students finishing the year strong. Ford could not be immediately reached for comment.

OK, well that may be fine for YOU, mister smarty-pants egghead education bureaucrat, but what about REAL Americans, who know that the purpose of schools in December isn't just about "learning things," but also the vitally important task of making sure that everyone knows that it's Christmas, which they might not be aware of if they had to merely rely on all the decorations everywhere?

At Fox, Todd Starnes handily put the Peabody School's administration in its place, noting the school system's proximity to that bastion of secularist evil, Harvard University, and calling the relegation of Santa Claus to the sing-along (and the principal's offer of an alternative) "an unadulterated dose of liberal lunacy" that was "enough to curdle your egg nog." And where's the leadership in this crazy school system, Starnes asked, helpfully leaving out all the stuff Superintendent Young said about focusing on academics so that Fox readers could see the real problem:

Jeffrey Young is the superintendent of this calamitous mess of public education. He told the Globe he doesn’t understand why Santa needs to visit the Peabody School.

To this, Starnes replied with the bestest joke ever. At least we think it's a joke:

I’d be willing to bet a pound of fruitcake the superintendent is at the top of Santa’s list.

We're not quite sure if this means that Starnes thinks Santa is real (and white, of course), or if he's trying to suggest that Santa is a stand-in for Jesus, who definitely cares about Young even if the superintendent rejects Him, or if we've just given more thought to a Todd Starnes line than its author did.

And where the Globe article mostly portrayed Cambridge parents as not especially worked up about Santa's absence, Starnes managed to find at least one very sad Christmas panda, parent Robert Thompson, who got on basic cable television news by telling Fox & Friends, "I come from a city that celebrates diversity and tolerance ... At its base this decision reeks of intolerance.”

After that, Starnes ran out of Christmas stuff to complain about and began listing other crimes against America and Jesus committed in the neighborhoods of Harvard and Cambridge -- offenses like limits on beverage sizes and a 2006 article about a school official who complained that mandatory recitation of the Pledge of Allegiance was a nationalistic push for "blind allegiance" to the flag, and not a good thing. You know, stuff that places the entire Cambridge area "to the left of Vladimir Putin."

We're worried again. The War On Christmas is simply not going well when even Todd Starnes can't manage to fill a whole column with seasonal outrage and has to start slagging on Harvard instead. Fox is falling down on the War On Christmas job -- the headline on Starnes's article even describes the event from which Santa was "banned" as a "Winter Concert," without any apparent disparagement of the term. Won't someone please replace Baby Jesus with a Cthulhu plushie in a public nativity display? Do it for the children.