Sarah Huckabee Sanders Got Her Ass Handed To Her, And It Was Glorious 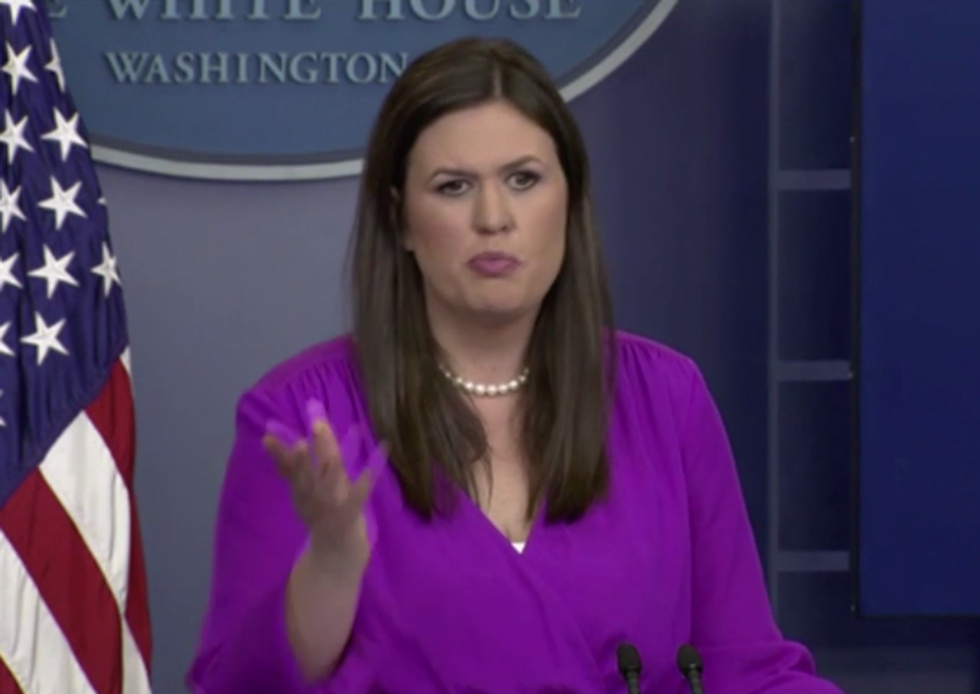 literally paid to lie to people, for a job

Let's talk about a hero this morning! His name is Brian Karem, and he is a White House reporter who writes for DC area regional papers, and also for Playboy, and he is TIRED OF SARAH HUCKABEE SANDERS'S SHIT. So Tuesday, during one of the only televised press briefings we've had lately (guess Steve Bannon decided nobody was too fat that day to appear on camera), he decided to tell Ms. Shuckabee what he thinks of this White House's constant smearing of real journalists as fake news, all while the Fake-Newser-In-Chief is still allowed to spread his orange butt cheeks all over the Oval Office. He was not having her crap about "unnamed sources," or her complaints about how CNN did the right thing when the network fucked up a Trump-Russia story, by accepting resignations from the three journalists involved in the publication of the story. Here's what Karem said:

MUST WATCH: White House reporter @BrianKarem pushing back against Sarah Huckabee Sanders and saying what many people have been thinking. pic.twitter.com/hW49e0tdWY

KAREM: You're inflaming everybody right here, right now, with those words. This administration has done that as well. Why in the name of heavens -- any one of us ... are replaceable, and any one of us, if we don't get it right, the audience has the opportunity to turn the channel or not read us. YOU have been elected to serve four years at least, there's no option other than that. We're here to ask you questions, you're here to provide the answers, and what you just did is inflammatory to people all over the country who look at it and say, "See once again, the president is right, and everybody else out here is fake media." And everybody out here in this room is only trying to DO THEIR JOB.

Sarah Huckabee Sanders responded, but it doesn't matter what she said because it was just more of the maundering bullshit we're used to from the Trump White House. Oh no, are we FAKE NEWS-ING HER by failing to report on her splendid and true words? Oh well, long hair, don't care.

But what's stunning about this is that, in this very same briefing where she was complaining about fake news, she encouraged people to watch the new video from noted con artist "journalist" James O'Keefe about how CNN is fake news, you know the one where he secretly videotaped the guy who cuts the grass on CNN's front lawn saying he thinks the Trump-Russia story is bullshit. Now, to be fair and balanced to the Shuckster, she said she doesn't know if O'Keefe's video is accurate or not, but everybody should watch it anyway. You got that? "Fake news" -- you know, the kind done by real journalists who petulantly refuse to tongue-bathe Donald Trump's grundle bumps -- is bad, now please go watch some ACTUAL fake news:

I don't know that it's that the response isn't good enough for the president. I think it's the constant barrage of fake news that is directed at this president, probably, that has garnered a lot of his frustration. You point to that report; there are multiple other instances where that outlet that you referenced has been repeatedly wrong and had to point that out or had to correct it. There's a video circulating now — whether it's accurate or not, I don't know — but I would encourage everyone in this room and, frankly, everybody across the country to take a look at it. I think if it is accurate, I think it's a disgrace to all of media, to all of journalism.

Holy shit, that is horrifying.

Anyway, everyone, have a nice day, because this kind of behavior from the White House is totally normal and definitely how America is supposed to be.