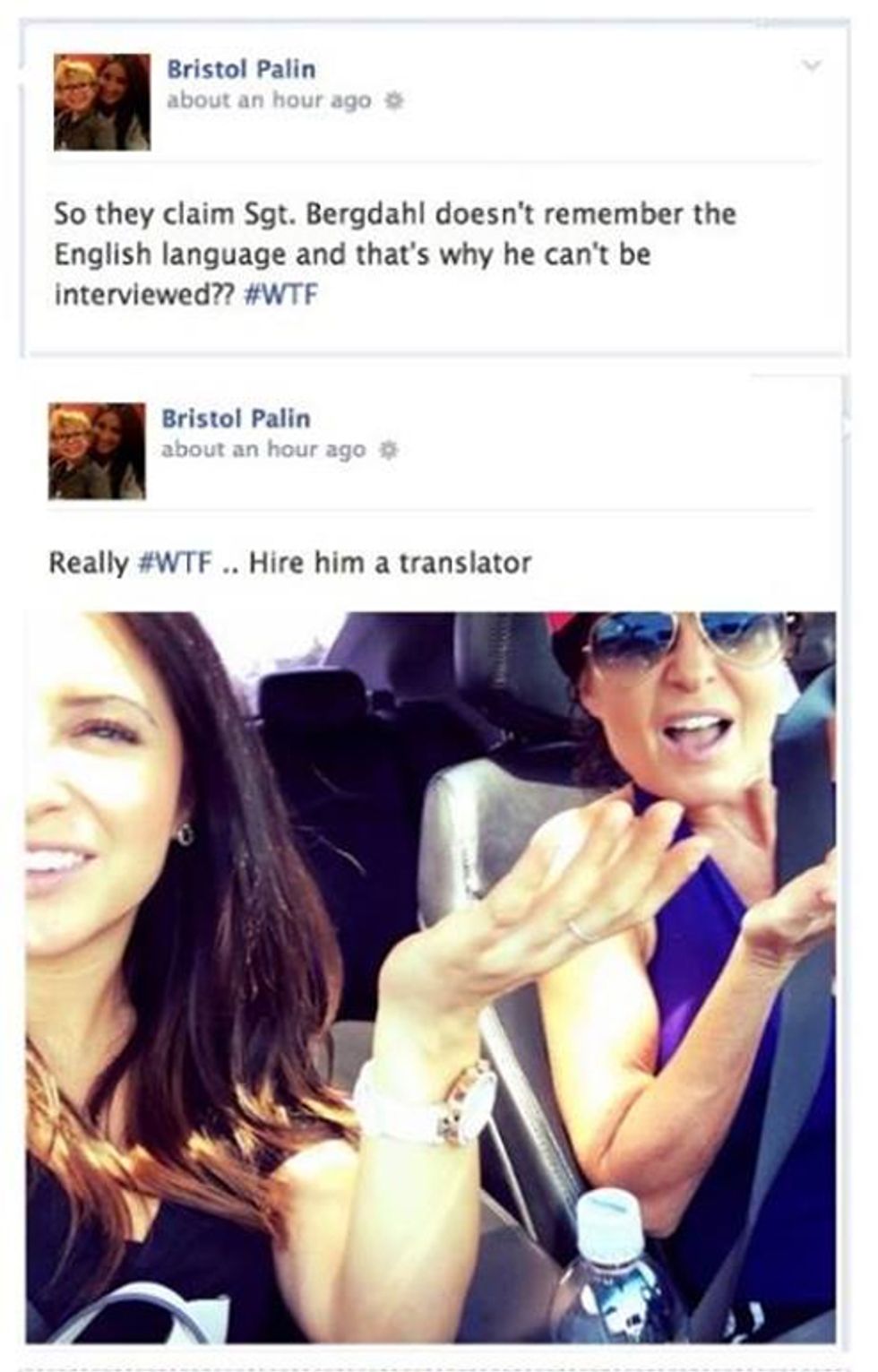 Sarah Palin posted an example of rightwing comedy on her Faceplace thing Tuesday with some hilarious riffs on the absurd notion that Bowe Bergdahl has "forgotten how to speak English" -- which isn't something that anyone in Bergdahl's family has really claimed, of course; we'll get to that after the jump. But first, let's enjoy Sarah's super funny mockery of a U.S. soldier, because mocking The Troops is what all the cool kids are doing these days.

Sarah was super-duper proud of her daughter Bristol's analysis of the situation, which mom thought was just brill:

Bristol posted an answer to supporters of Obama's terrorist negotiations to free the Taliban's Dastardly Dream Team in exchange for the sketchy "I'm-ashamed-to-be-American" Sgt. Bergdahl, who is accused by his fellow soldiers of deserting and denouncing America before going AWOL – a decision which cost other soldiers their lives as the Army mounted extensive operations to find Bergdahl after he abandoned his post. Sympathizers now tell the media Bergdahl can't be held to account anytime soon because he can't be interviewed... claiming he's forgotten how to speak English. Really? See below. Then # Call1-800-RosettaStone.

Now, of course, we haven't actually seen any of these supposed defenders saying that Bergdahl "can't be interviewed" because he's "forgotten English" -- at least no one in any official capacity has said that -- and we're certainly not waiting for Sister Sarah to provide an example. But she's got an excellent point anyway -- Bergdahl was released a whole 4 days ago, so why hasn't he held a four-hour press conference to explain himself? Or at least been waterboarded? It's been nothing but delay, delay, delay while he allegedly is "treated" for "serious health problems" at a "military hospital" in "Germany." What is Obama hiding? Most people get released from "5 years of captivity" and are out doing jumping jacks the next day, aren't they?

We sure are loving all the outrage over the never-made claim that Bergdahl "forgot English." Yr Doktor Zoom got an email on this himself from Concerned Patriot Andrew Pavone (who included his name, so we shall include it):

Why is the father speaking to the son in Arabic??? It would be IMPOSSIBLE that the POW son would "forget" English. It's weird man, very weird. It's not normal. It's far from normal. You would think the parents would be angry at the Taliban for capturing their son, holding him hostage, waging violent war against their son and his fellow soldiers, etc... I don't ever recall any families of POW's going on TV and speaking Vietnamese to VC and NVA troops holding their children. This whole scenario is BIZARRE. Bizarre. - Andrew Pavone, NY

We like this one because we keep waiting for Mr. Pavone to get to "Game over, man. GAME OVER!"

The thing is, no one ever said Bowe Bergdahl has forgotten English. Lots of people have said Bob Bergdahl said that, but what he actually said was that Bowe was "having trouble speaking English" -- which frankly, was not a medical diagnosis anyway, but something Bob Bergdahl believed.

And which is probably not altogether true -- we spoke to an actual linguistics professor at Boise State, who said that barring neurological impairment, adults don't just forget their native language, even while isolated and in captivity, although if the only language you are exposed to or use for five years is something else, it wouldn't be unusual for you to have trouble remembering some words.

Haha, but that is just stupid, NO ONE FORGETS THEIR NATIVE LANGUAGE and Al Gore should stop claiming he invented the internet!

Anyway, Palin goes on, as she does:

Does anyone remember abused POWs like John McCain, Tom Moe, James Stockdale, Tom Kirk, and other American troops forgetting the English language during their years and years of brutal, inhumane captivity? Seems these war heroes returned to their beloved country not speaking Vietnamese, but speaking KickAss against those who would destroy the red, white, and blue.

Actually, we remember claims that McCain actually was a chickenshit traitor because, under torture, he signed a confession. Sane people would recognize that anything said under torture is meaningless, of course, but then sometimes things get lost in translation when your only language is KickAss and you hate some of the Troops.

Follow Doktor Zoom on Twitter. He is just going to say "cunning linguist" right here because he wants to ruin some commenters' day, the bastard.