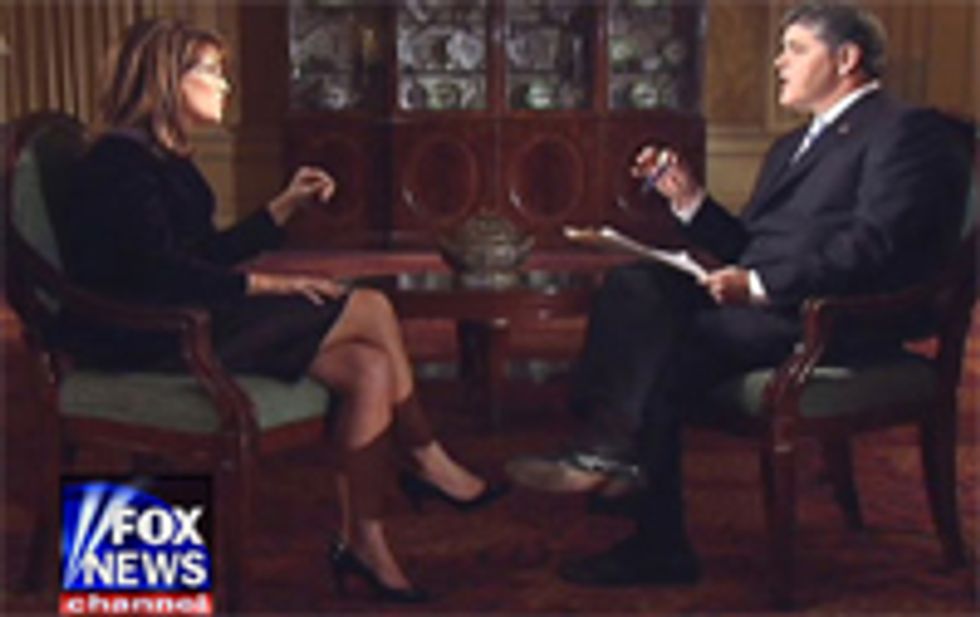 Sarah Palin barely survived Charlie Gibson's interview, but shedid survive, and now she's in much safer hands for her Second Interview, this time with Sean Hannity. Part one airs tonight at 9 p.m., so be sure to not watch that at all. Fox has released some excerpts from the interview, and there appear to be many questions about this "terribly fucked economy" that average Americans like Ken Layne are losing their minds over. So let's check out the canned answers that some McCain intern programmed Palin to rattle off.

Now don't get all huffy at Sarah, she's just repeating the official McCain campaign dodges about the financial crisis:

On who is responsible for the failing financial institutions:

"I think the corruption on Wall Street. That’s to blame. And that violation of the public trust. And that contract that should be inherent in corporations who are spending, investing other people’s money, the abuse of that is what has got to stop."

On if there should be an investigation on relationships between political donations from Fannie and Freddie Mac and the bankruptcy and its impact on the economy:

“I think that’s significant, but even more significant is the role that the lobbyists play in an issue like this also. And in that cronyism -- it’s symptomatic of the grade of problem that we see right now in Washington and that is just that acceptance of the status quo, the politics as usual, the cronyism that has been allowed to be accepted and then it leads us to a position like we are today with so much collapse on Wall Street. That’s the reform that we’ve got to get in there and make sure that this happens. We’ve got to put government and these regulatory agencies back on the side of the people.”

It's a fitting continuation of this morning's bullshit talking points as shown in McCain's new ad, about how "corruption on Wall Street" is the cause of the worst financial meltdown since the Great Depression. McCain and Palin have absolutely nothing to work with, and so this is what they're doing: blaming problems on a few rogue players in the market who apparently did something illegal. It'll take a pair of moral reformer Mavericks to clean up the otherwise healthy rich person's money street. This is how they're trying to explain the financial crisis.

For the last 10 years or so, people like John McCain, Phil Gramm, George W. Bush and terrible Bill Clinton have let big investment banks do whatever they want -- low margins, murky debt investment packages, insurance for those murky debt investment packages, etc. -- and ceded their regulatory authority to supposedly flawless risk models. Corruption? There's always some corruption. But when the government leaves major firms that control such vast and widely distributed amounts of wealth to their own devices, those firms see a window to play aggressively with their capital -- aggressive to the point where such lending should be illegal, but isn't illegal, and that's when they fuck up, legally, and "we" pay for the bail-out.

The financial collapse is not so much "cronyism" as it is "the unequivocal failure of Republican economic theory, and Bill Clinton sucked too." But! Maybe Walnuts will eliminate greed on Wall Street, as he promised to do this morning.

Excerpt's from Palin's Hannity Interview -- Part I [The Page]