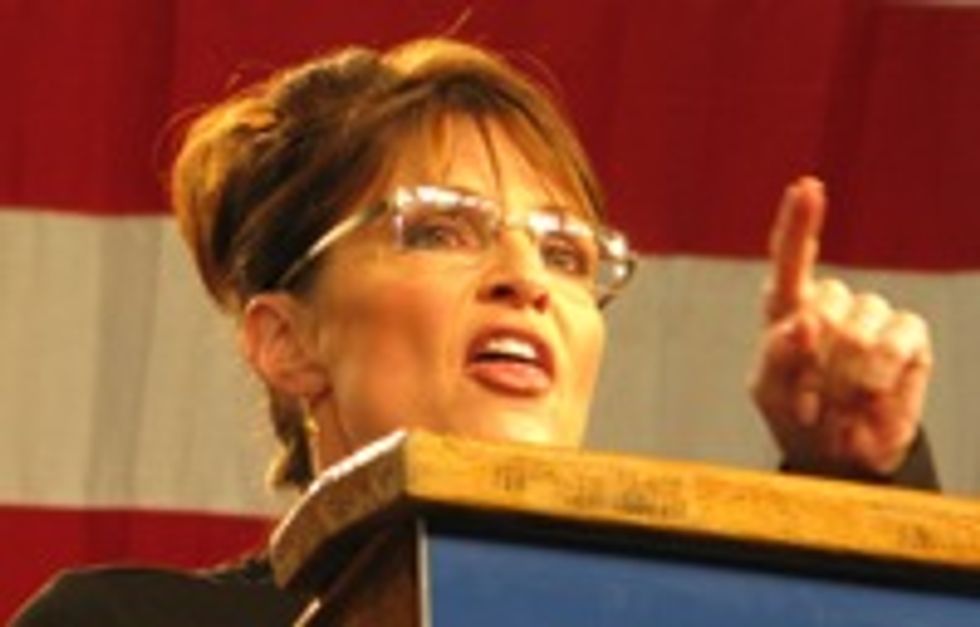 Alaskan waterhead Sarah Palin went to Ground Zero! She is really enjoying her first trip to a city, and also probably sawMAMMA MIA and The Lion King, which she found "too liberal." And you know what's super-duper tall? The Empire State Building, that's what! They don't make 'em like that in Wasilla, where the tallest building is a Taco Bell arch. Anyway, let's look at the transcript of Palin's very brief, very embarrassing bit of give and take with the poor reporters who have to follow this idiot around New York and finally got to holler four questions today.

We will not take the easy way out, here; what follows is the entire transcript of her first-ever taking of questions from the press corps, with our comments. Why didn't we just cherry pick a few extra-dumb sentences and hit "publish"? Because it's all extra dumb.

Your new vice president of vapidity, Mrs. Palin, started off with some numbskull grade-school-vacation recitation they must've hammered into her big-haired head all night long, Gitmo style:

"Every American student needs to come through this area so that, especially this younger generation of Americans is, to be in a position of never forgetting what happened here and never repeating, never allowing a repeat of what happened here."

If she learned anything at the Idaho community college of local sports commentary, it's "filling air time." Exactly like the infamous airhead Miss Teen South Carolina, Palin has been coached to mindlessly say phrases such as "younger generations of Americans" and to dully repeat variations of any vaguely familiar phrase she stumbles upon: "never forgetting," "never repeating," "never allowing a repeat," etc. This is called "autism."

It's a sweet platitude, and wouldn't come off quite so dim if "every world leader" hadn't already paid their respects at Ground Zero, about seven years ago, when Palin hadn't yet learned New York was part of the United States.

"And just to hear and from and see these good New Yorkers who are rebuilding not just this are but helping to rebuild America has been very, very inspiring and encouraging. These are the good Americans who are committed to peace and security and its been an absolute honor getting to meet these folks today."

Leave it to someone who has never seen a skyscraper before this week to think the ugly hole left by the World Trade Center's destruction seven years ago is "inspiring and encouraging." It's a sad monument to everything America can't do anymore.

And now, her first "unscripted" answer to a reporter:

CNN: On the topic of never letting this happen again, do you agree with the way the Bush administration has handled the war on terrorism, is there anything you would do differently?

A: I agree with the Bush administration that we take the fight to them. We never again let them come onto our soil and try to destroy not only our democracy, but communities like the community of New York. Never again. So yes, I do agree with taking the fight to the terrorists and stopping them over there.

Ugh. Not even George W. Bush trots out the "taking the fight to the terrorists" bullshit about Iraq these days, does he? Also, again with the mindless repetition of whatever word her pea brain stumbles upon: "communities like the community," etc.

Also: Does she really believe immigrants and visitors from Iraq and Afghanistan are not allowed to "come onto our soil"? Probably.

POLITICO: Do you think our presence in Iraq and Afghanistan and our continued presence there is inflaming Islamic extremists?

A: I think our presence in Iraq and Afghanistan will lead to further security of our nation, again, because the mission is to take the fight over there. Do not let them come over here and attempt again what they accomplished here, and that was some destruction. terrible destruction on that day. But since September 11, Americans uniting and rebuilding and committing to never letting that happen again.

A: Ted Stevens' trial started a couple days ago. We’ll see where that goes.

POLITICO: Are you gong to vote for them?

JERSEY JOURNAL: What do you think of bailout package before congress?

A: I don't support that until the provisions that Sen. McCain has offered are implemented in Paulson's proposals.

Translation: "I have no idea what's in the bailout package, and neither does McCain, and I wouldn't understand a word of it if you read Paulson's proposal to me right now."