Sarah Palin Knows All About This George Orwell Fella, He's The One Who Sent The Pig To The Jello Factory 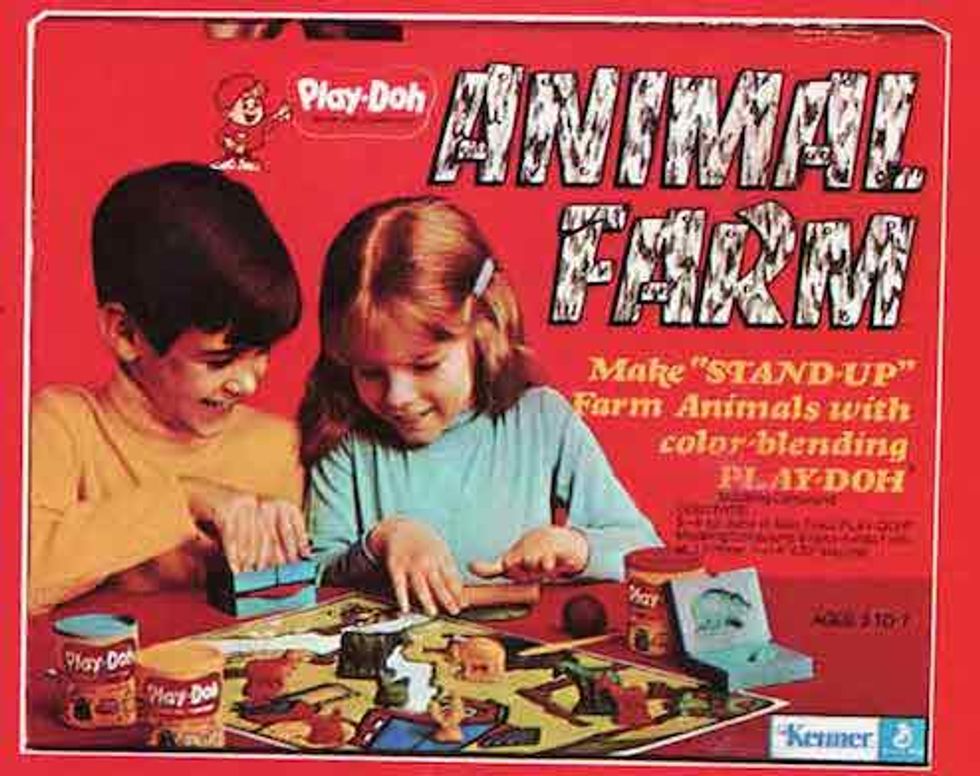 Sarah Palin has been doin' some book learnin' and appears to have finally made it all the way through George Orwell's Animal Farm, which was probably pretty hard for her, let's be honest. She's so excited about her ever-growing love for Orwell and her ever-growing certainty that Bamz is making 1984 happen all over your face that she seems to be laboring under a misconception that schoolchildren can ever ever avoid reading Orwell.

[M]any children have been, unfortunately, shielded from reading the staples “Nineteen Eight-Four” and “Animal Farm” in school. Then encourage them by your actions to be engaged and NOT LET IT HAPPEN.

We can't tell if that's a chopped salad, or more of a Nicoise. Nonetheless, Sarah Palin, schoolmarm, has a reading assignment for you: Sarah is so certain that your children are not reading and appreciating their 10th-grade English assignments on Orwell enough that she is begging and pleading that you explain a really long and tedious and completely lacking in internal logic column from Victor Davis Hanson to your kids because what else would make them love Orwell more?

America, of all places, is becoming Orwellian. The president repeatedly reminds the American people that under his leadership, the U.S. has produced a record level of new oil and natural gas. But didn't Obama radically curtail leases for just such new energy production on federal lands? Have the edicts on the barn wall of "Animal Farm" been changed again, with the production of new oil and gas going from bad to suddenly good?

Victor Davis Hanson, perhaps you spent too much time yelling about the Mexicans, because you are not really too sharp on Orwell or basic logic. See, there is no reason that bragging on record levels of new gas and oil production is in any way contradictory to curtailing leases for federal lands to drill, baby, drill. We could be doing more drilling on private lands! We could be getting more better at drilling! See how we did that there? This is how grownups put ideas together. Consider trying it some time.

VDH might also consider giving the old Google a whirl before setting virtual pen to paper, because then he could sound much less dumb. Witness this grumble:

The Obama administration says it is pleased that workers will now be freed from "job lock." What is job lock -- a made-up Newspeak word right out "1984"?

Um, no, actually. "Job lock" is a thing that your buddies the Heritage Foundation and Paul Ryan used to be very concerned about until they figured out Obamacare actually does free people up to change jobs. Ryan and Co. have been yammering on about it since at least 2008.

BTW, VDH, that link took us approximately 8 seconds to scare up. So, "job lock" is neither Orwellian nor new. Moving on.

Victor is also very concerned that Bamz is being double-speaky about the IRS.

In 2013, the IRS confessed that it had targeted particular political groups based on their names or political themes -- a Big Brother intrusion into private lives that was revealed at about the same time the Associated Press and National Security Agency eavesdropping scandals came to light. During the initial media frenzy, President Obama blasted the politicization of the IRS as "outrageous." [...]

Congressional committees and the Treasury Inspector General for Tax Administration found that groups loosely associated with the Tea Party were more likely to have their tax-exempt requests put on hold than other nonprofits. Yet recently, President Obama concluded of this entire mess that it did not entail "even a smidgen of corruption."

It takes Orwell's doublethink to explain how a scandal might have rated an "outrageous" before the people in charge quit, retired or invoked the Fifth Amendment, and then, after their embarrassing departures, was reinvented as an episode without a smidgen of corruption.

Nice try Victor! Participation medal for Victor! But still wrongheaded and confused about what "Orwellian" means.

First, something can be outrageous and not actually be corrupt. Weird, right? See, the IRS was deluged with applications from nonsense pretend political groups hoping to get non-profit status, and began asking for more info from groups with things like "patriot" and "tea party" in their names. ASKING FOR MORE INFORMATION, PEOPLE. The Orwellian monstrosity of it can hardly be believed. It may have been outrageous that the IRS used those words to try to track groups that were political rather than actually nonprofit (A POINT WE DO NOT CONCEDE, DUH) but that does not mean it was born out of corruption. Sorry Victor.

Also, too, Bamz's statement about the outrage was back when the IRS' Lois Lerner was mistakenly explaining that they held up all the Tea Party-related applications, which turned out not to be true, so no longer outrageous! Sometimes, Victor, people change their minds about a thing when circumstances change. We know this is unfamiliar to you, but if you take it slow, you'll probably figure it out.

Victor wraps up with what should have been a big finish, but actually falls flat after all the BLAARRRGGGGHHH about how Bamz is Big Brother: both left and right make shit up, but Orwell was more concerned with the left ipso facto ergo Obama bad. Whut? Victor, Victor, Victor. You really do not get this Orwell guy at all: he hated Stalinist communism, but mostly because he hated what it had done to pervert and ruin socialism. In "Why I Write" (1946), he makes it clear that he did not see the glorious free market as the cure for communism:

The Spanish war and other events in 1936-37 turned the scale and thereafter I knew where I stood. Every line of serious work that I have written since 1936 has been written, directly or indirectly, against totalitarianism and for democratic socialism, as I understand it.

Got it? George Orwell is not on your side, Victor. Now, what were we saying about changing circumstances? George Orwell lived at a time and in a place where the vagaries of Communism were a real thing to be worried about. You, Victor, do not. Not even a little bit. Try again. Actually, don't, because we don't want to read another one of these columns.

Victor Davis, You Must Work Harder.