Sarah Palin To Be Pelted With Cheese Curds In Wisconsin Saturday 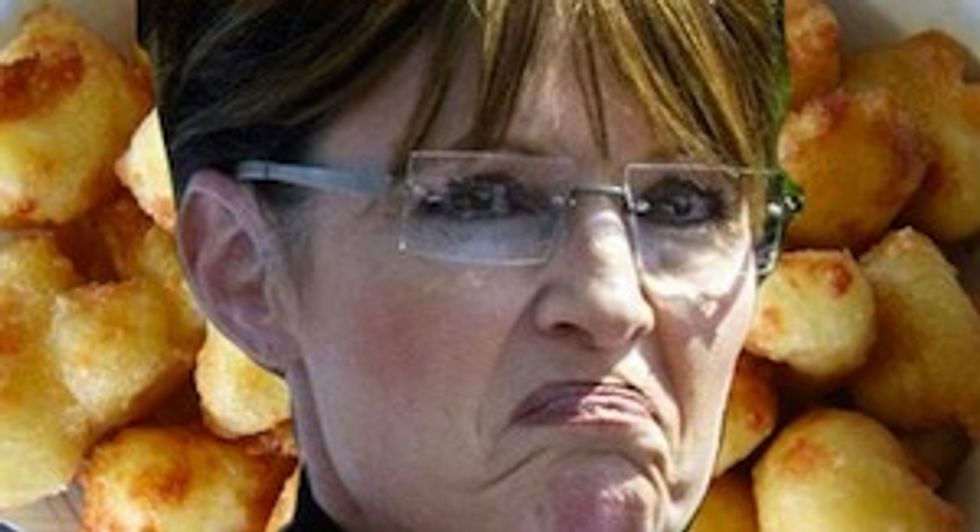 The Koch Brothers think it's hilarious when their dumb puppets have to go face huge, angry crowds of political opponents. Remember the movieTrading Places? It's the same idea: Incredibly rich old white creeps just torture their own lackeys whenever it gets dull oppressing the faceless poor and destroying the Earth to make Dixie Cups and Brawny paper douche towels. So the Koch Brothers are bringing Sarah Palin to Madison, right there at the State Capitol, for an "Americans For Prosperity" rally. Haha the union people and college kids are going to pelt her with a million pounds of Wisconsin's famous Fried Cheese Turds. Or curds, whatever. Curdle Rain. Poor snowbilly grifter!

Saturday, as in this weekend, the Wasilla dingbat is comin' to get her paycheck:

Saturday looks to be a very busy day Downtown. Along with the tea party rally, the Capitol Square will host a counter-rally as well as the season’s first Dane County Farmers’ Market.

Farmers’ Market manager Larry Johnson said he expects all of his vendors to show up, but he isn’t sure what the protest will mean for turnout.

“I don’t know if they will be buying from us, or getting in the way,” Johnson said.

In other words, all the vendors will be selling lots of old tomatoes and many thousands of pounds of rancid cheese curds.

The terrible thing about the Fried Cheese Curds plot is that you can't ban Wisconsin's most beloved food outside at the State Capitol on a nice spring weekend. It's just food, jeez Hitler.

But anyone who has been repeatedly pelted with day-old fried cheese curds will tell you there's nothing fun about it. First, they get greasy as H-E-double hockey sticks. And after sitting in the trunk of a car all night, for some reason, they also get kind of hard and rubbery -- more than when you eat them, we mean.

It's a shame this country has turned into such an evil socialist toilet that midwesterners would stoop so low as to stoop down and get a handful of cheese curds and hurl them at Sarah Palin, the Koch Brothers' latest human prank on Wisconsin. [TPM/Madison.com]