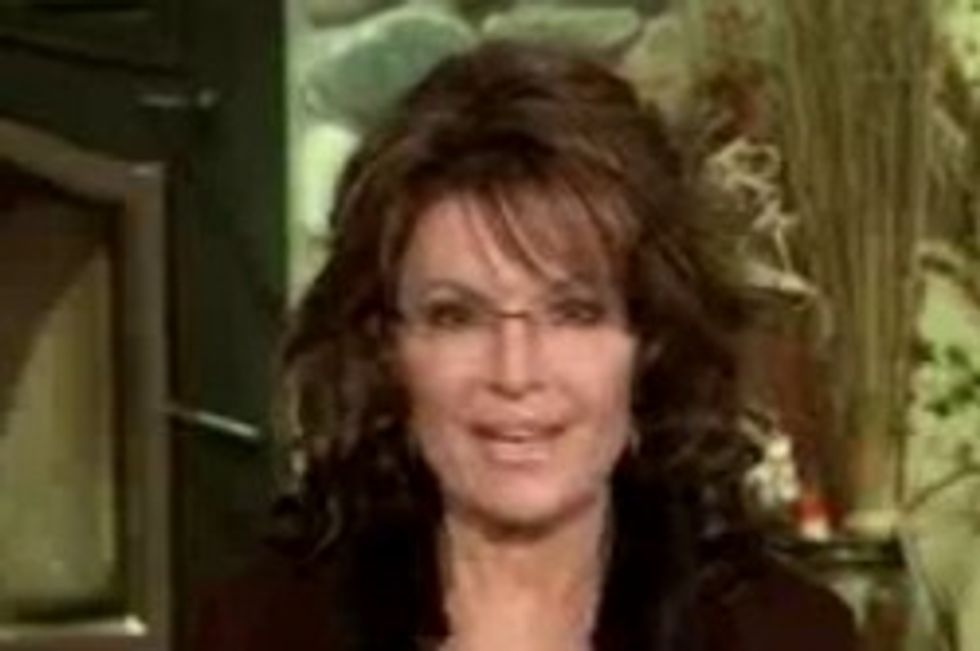 Sarah Palin, world's greatest unwitting composer of spam correspondence, has joined delightfully unexpected team of avengers Gingrich, Perry, Paul, Santorum and Huntsman LLC in attacking Romney's Bain Capital tenure, specifically his claim that he created 100,000 jobs while papering his 100,000-square-foot house with 100,000 benjamins. Never mind that in the past one-eighth-eon that constitutes a modern political day, some members of the anti-Romney force, most of all Rick Perry, have gone into temporary Bain-bashing retirement.

(For a recap of what Team Non-Romney accomplished Wednesday -- it was really quite beautiful -- just watch this little clip.)

Irrelevant Sarah jumped in just a little late, saying on Fox News that Romney needs to actually "prove" to America that he created those 100,000 jobs. WARNING: many pronouns to follow.

This isn't about a politician making huge profits in the private sector, [I] think what Governor Perry is getting at is that Governor Romney claimed to have created 100,000 jobs at Bain and you know, people are wanting to know: Is there proof of that claim? And was it U.S. jobs created for United States [c]itizens? You know, the 100,000 jobs, and I believe that that's what Governor Perry is getting at is, you know, own up to the claims that are being made I had and that's fair. That's not negative campaigning, that's fair to get a candidate to be held accountable to what's being claimed, especially when it comes to job creation because so many of us are so concerned about what's going on on Main Street, as well as Wall Street."

At it but and so you know is that it is but who what where why how and then me and you and money and yes well. But the woman has a point.

Unfortunately, Romney, campaigning in South Carolina Thursday, came to the defense of himself re: Bain, saying the following:

There are a number of businesses that we helped start, which collectively, you can just look on their Web sites, added well over 100,000 jobs. And then the press has also reported on businesses that lost employment and that was a few thousand jobs that were lost. In each case where there was job loss, there was an effort on the part of the management team to try and preserve the business and to have a brighter future. The net of the two is pretty clearly well over 100,000 jobs, and the reality is in the private sector, that there are some businesses that are growing and thriving, and we were fortunate enough to be able to be part of that in a small way, and there’s some businesses that have to be cut back in order to survive and try to make them stronger. And sometimes you’re successful at that and sometimes you’re not.

Able to be a part of that in a small[*] way. Also, how exactly does "just looking on" the websites of the companies show America how many jobs Bain created for them?

If the Mittvengers would just keep on keeping on, it may possibly hopefully wishfully be only a matter of time before Mitt Romney self-destructs in one spectacular vomit of words just like his father did. [Fox News via RealClearPolitics]

*"Bain produced about $2.5 billion in gains for its investors in the 77 deals, on about $1.1 billion invested. Overall, Bain recorded roughly 50% to 80% annual gains in this period, which experts said was among the best track records for buyout firms in that era."