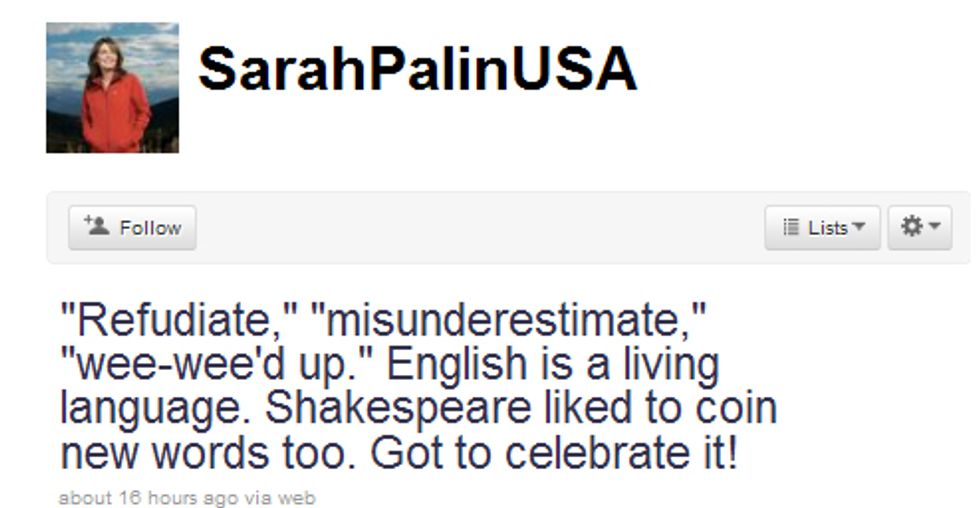 Oh for Pete's sake! Merriam-Webster's Word of the Summer is Sarah Palin's merciless assault on the Queen's English, "refudiate," and only because refudiate has been the most searched-for non-word on its Internet website since the fateful day William Kristol declared it amiracle of profound conservative wordsmithery. Is the volume of Internet searches the only criteria for this literary honor? We are confused then as to why "Bristol Palin nekkid" or maybe "birfcertificate" is not the Word of the Summer. Very fishy indeed, perhaps fishy enough to warrant a recount?

Sadly no, but you probably can count on Sarah Palin incorporating this into some sort of horrible political ad when she runs for Governor of America in 2012, in which ad she brags about being the only native Alaskan besides Shakespeare to invent a word that is Googled a lot on Merriam-Webster's elitist Internet dictionary.

What were some of the runner-up words? They were mostly found in complicated movie titles and tabloid headlines about Chelsea Clinton.

Some other top words: inception and despicable, both used in summer movie titles.

Also: Rhinebeck, New York, "used to describe Chelsea Clinton’s wedding." (Fine, it was actually "opulent," but do you see the troubling trend here?)

Today we are all Merriam-Webster's Word of the Summer. [Boston Herald]