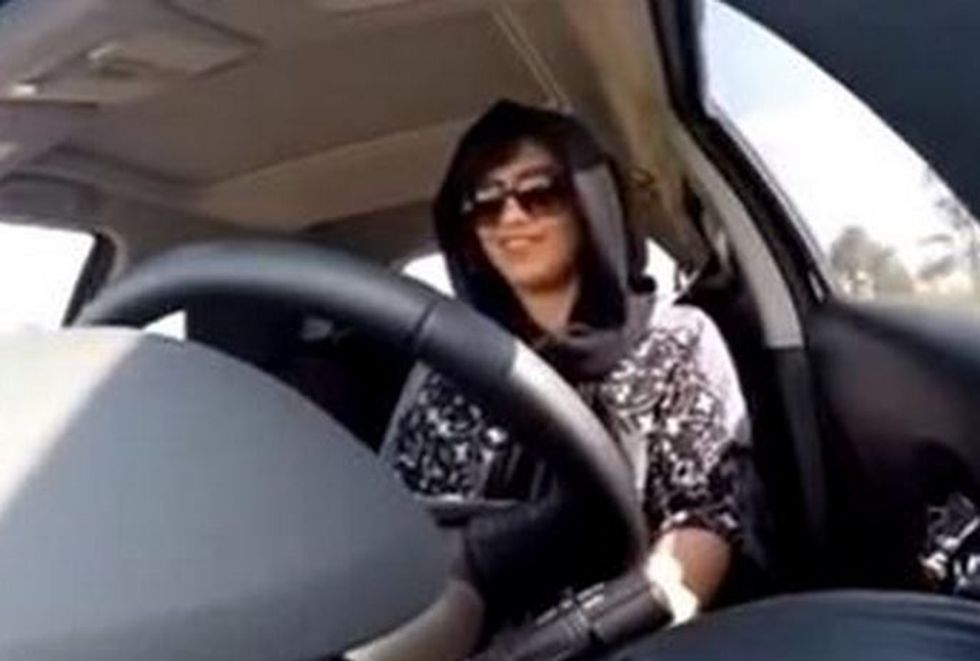 Saudi Arabia has a problem. No matter how many times their powerful religious authorities warn about the dangers posed by females engaging in the act of driving, those crazy ladies keep getting behind the wheel! It's not even a big deal that authorities refuse to issue drivers' licenses to women, since they can get their male relatives to accompany them everywhere, which is just as good as controlling their own lives, and never mind that Saudi Arabia doesn't have an actual law that says only men can drive. That's just the way it is, OK?

The only thing worse than women who drive in Saudi Arabia, forcing the authorities to arrest them, is women who tweet about not being allowed to drive. Fortunately, the Saudi government has found an innovative new tactic to counter this dire threat. Two women who've posted about their opposition to the ban were detained for driving at the country's border with the United Arab Emirates, have been held in jail for a month, and have now reportedly had their cases referred to a special court set up in Riyadh to handle terrorism.

The cases of the two, Loujain al-Hathloul and Maysa al-Amoudi, were sent to the anti-terrorism court in connection to opinions they expressed in tweets and in social media, four people close to the two women told The Associated Press.

They did not elaborate on the specific charges or what the opinions were. Both women have spoken out online against the female driving ban. Activists say they fear the case is intended to send a warning to others pushing for greater rights. The four people spoke on condition of anonymity because of fear of government reprisals.

What's to fear? The government's prior responses to the scourge of women driving in public have been well-reasoned, with stays in jail comparatively short and the offending women released after swearing, in the presence of male relatives, not to endanger the country by driving in defiance of a ban that is the only one of its kind in the world and makes Saudi Arabia look comically repressive even by the standard of Persian Gulf states.

One of these alleged terrorists, Loujain al-Hathloul, posted a 35-second video of herself destroying the very fabric of society by piloting a vehicle powered by an internal combustion engine on paved surfaces. It appears to have been shot shortly before her detention on Dec. 1 for insisting she was allowed to drive a car across the border into Saudi Arabia from the UAE. Maysa al-Amoudi was reportedly detained while trying to deliver food and a blanket to al-Houtloul while she was at the border crossing.

Clearly a madwoman. Chillingly, increasing numbers of Saudi women are following her example and driving around like regular people, and there seems to be no shortage of men who support this dangerous uprising! Didn't they hear the warning from prominent cleric Sheikh Saleh al-Lohaidan? Ladies who drive will mess with their babyspace.

If a woman drives a car, not out of pure necessity, that could have negative physiological impacts as functional and physiological medical studies show that it automatically affects the ovaries and pushes the pelvis upwards. That is why we find those who regularly drive have children with clinical problems of varying degrees.