Save Us, Davos. You're Our Only...Nope 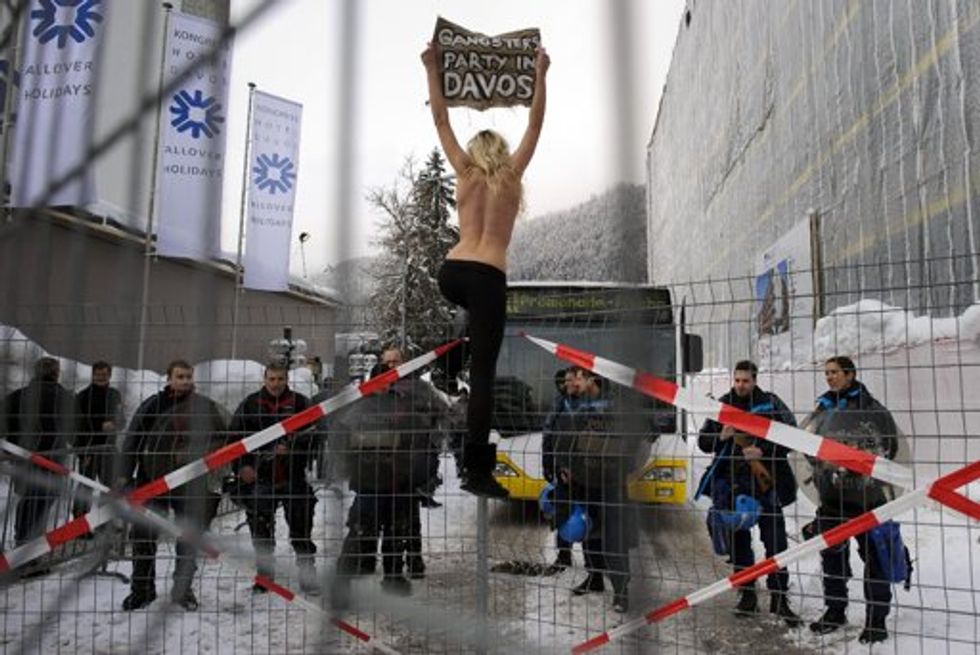 You got through the week! Good stuff, America. But if there's a sense of peril gnawing at your soul, you're not alone. Even the world's most fabulous capitalists feel it.

Right Wing Nationalists. Left Wing Populists. Female Ghostbusters. The world is becoming a little too real for the money changers and heads of state who attended the most elite circle jerk in the Solar System: the Davos World Economic Forum.

This year, some Davos attendees dipped their toes in movement populism before returning to their regularly scheduled caviar baths. "Inequality" was a central theme at this year's retreat. The Powerful People are scared -- not that so many people are struggling with debt or preventable health issues, but because the plebes are SO MAD about it.

Panels were held. "How can we empower upward mobility for the marginalized?" That's a great question! Let's talk about it on the gondola ride to the peak of the newly renamed Mt. Chavez.

After Oxford University's Ian Goldin celebrated the achievements of globalization, he warned attendees to remember historical instances where mouth-breathing civilians resentfully grabbed the pitchforks in jealous response to the greatness of great people.

But Mr. Goldin’s comments were merely the prelude to a conversation that was supposed to be about how to pull that off. The answers from the corporate executives who composed a panel could be crudely boiled down to this: The people who have not benefited from globalization need to try harder to emulate those who have succeeded.

Yes, Joe the Lyft Driver/Part-Time Retail Clerk/Plasma Donor. Try harder to start your own hedge fund and park your profits in the Caymans. That's how to bring wealth and the miracles of innovation to the masses.

But nowhere in the discussion was there a mention of tax policy, or addressing the soaring costs of gaining higher education, or access to health care.

In the end, participants stopped short of advocating more progressive taxation and stronger worker protections and empowering them with greater bargaining rights. But that's good, because as the Davos concierge warns: If your flirtation with populism that actually benefits the working class lasts more than 4 hours, please consult your car elevator operator (and make him clean up the mistress's champagne vomit from the Rolls).

Let's tie the bow on the Obama Administration's "prosecution" of Banksters

Prior to the inauguration, the Deutsche Bags at Deutsche Bank reached a settlement with the DOJ over their handling of lovely mortgage-backed securities. For misleading investors into buying the puffed up and ultimately shitty securities, Deutsche Bank will pay a total of $7.2 billion: $3.1 billion as a civil penalty and $4.1 billion in relief to homeowners.

Billions in relief to homeowners? How novel! Liberals spent years trying to get Congress to address this issue beyond the tepid HAMP relief. After unsuccessful attempts to grant Bankruptcy judges the ability to modify payment terms, the day has finally come! There must be a catch. (There's a catch.)

The Deutsche Bank [...] allows the German lender to finance other firms that buy nonperforming loans on the cheap and that restructure them for profit. That provision appears in two footnotes in the more than 110 pages of settlement documents, and says the bank will get credit for “financing arrangements” that it offers to other firms that can modify and make mortgages. Those firms may include private equity funds or mortgage payment collectors known as servicers.

Since the Bank doesn't hold any American mortgages, it was able to spin its consumer relief into another shot at profiting off the very system it helped destroy. Justice! Help consumers by throwing some relief money to a private equity fund. Voilà. Justice!

It's a sad end to an area where a good president did a pretty poor job. Foreclosure relief never came for virtually any Americans. Unless you're a corporate citizen in the finance industry.

Be despondent. Be angry. Now go take your goddamn Congress and statehouses back in 2018.

Speaking of "angry," your criticism of Labor Secretary nominee Andy Puzder is taking its toll on the poor fast food fella.

President-elect Donald Trump's choice to be labor secretary has voiced second thoughts in recent days, because of a relentless barrage of criticism from Democrats, labor unions and other liberal groups, a business ally and GOP sources tell CNN.

Come on guys, lay off. Can't we just let the Carl's Jr. CEO peddle the same Chamber of Commerce pap in peace? Let the cruel motherfucker talk about how limiting overtime pay, eliminating the minimum wage and outsourcing jobs will actually create more money for American workers by letting the free market go to work and endowing workers with a sense of pride. By making less money, they'll actually make more money! In the meantime, how much pride do I need to buy a gross Hardee's burger?

Puzder made a fledgling and disgusting chain of food stores profitable for shareholders, so there's no doubt he's is intelligent. Andy doesn't get the DeVos/Carson/Perry excuse of being a dishonest-yet-naive dipshit. While he loathes his workers, he possesses true love for our robot friends. Maybe it's because they "never take a vacation...never show up late, there’s never a slip-and-fall, or an age, sex, or race discrimination case." Or maybe it's because he doesn't have to toss 'em around to show em who's boss.

What we do know is that he sounds like a true "tough guy" who probably wouldn't last a shift as a Carl's Jr fry cook.

"He may be bailing," said a Republican source plugged into the Trump transition effort. "He is not into the pounding he is taking, and the paperwork."

While Puzder remains irked by his job application, the White House is down for the Confirmation Octagon.

To that end, two Republican sources did not dispute but cautioned against reading too much into word of second thoughts. One of them added that "Trump loves it and wants the fight," and said it was his information that senior transition officials were aware of Puzder's concerns and urging him to stay in the fight.

On Thursday, Puzder's confirmation hearing was postponed for the third time because his papers aren't in order. Dude, that's your third absence in three weeks and you haven't even started yet! Andy Puzder would've already fired your sorry No Call/No Show ass. Maybe it's time for our first Robot Labor Secretary.