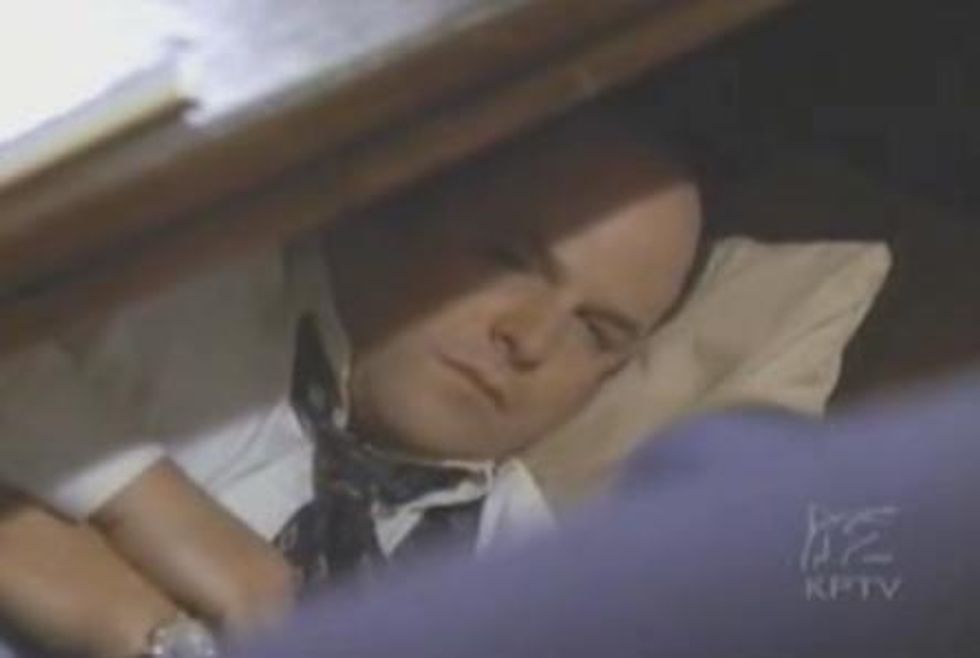 So if you're really determined to slack off at your job, here's a lesson from the EPA's highest-paid employee: No sense just spending the occasional afternoon reading Wonkette or farting around upgrading your virtual rutabaga farm on RutabagaFarmAdventureVille. That's chump-level slacking. No, if you're going to defraud your employer, you want to go the route ofJohn C. Beale, who told his bosses at the EPA that he couldn't do his assigned job because he was on assignment for the CIA in Pakistan. And somehow, nobody checked up on him.

Sure, there's the small matter of facing a federal fraud conviction and spending 30 months in prison. But hey, beats working. In September, Beale pleaded guilty to defrauding the government of almost $900,000 in pay and benefits since 2000. The hell with slipping some post-its into your pocket -- Beale was a man with big dreams and a can-do attitude toward fraud, in addition to a don't-wanna-do attitude toward his actual job.

EPA Assistant Inspector General Patrick Sullivan, who headed the investigation, was impressed and horrified when he took on the case last February:

“I thought, ‘Oh my God, How could this possibly have happened in this agency? I’ve worked for the government for 35 years. I’ve never seen a situation like this.”

Beale's "job," insofar as he ever actually did it, was “senior policy adviser” in the EPA's Office of Air and Radiation, for which he somehow managed to get paid $206,000 a year, the agency's highest salary -- more money than the EPA Administrator, Gina McCarthy, who was his direct supervisor -- was paid. And his cunning plan for defrauding the government was simplicity itself: He just didn't show up for work, sometimes for months at a time, including "one 18-month stretch starting in June 2011 when he did 'absolutely no work,'” according to his own lawyer. But Beale had an excellent, airtight cover story:

To explain his long absences, Beale told agency officials -- including McCarthy -- that he was engaged in intelligence work for the CIA, either at agency headquarters or in Pakistan. At one point he claimed to be urgently needed in Pakistan because the Taliban was torturing his CIA replacement, according to Sullivan.

“Due to recent events that you have probably read about, I am in Pakistan,” he wrote McCarthy in a Dec. 18, 2010 email. “Got the call Thurs and left Fri. Hope to be back for Christmas ….Ho, ho, ho.”

In fact, Beale had no relationship with the CIA at all. Sullivan, the EPA investigator, said he confirmed Beale didn’t even have a security clearance. He spent much of the time he was purportedly working for the CIA at his Northern Virginia home riding bikes, doing housework and reading books, or at a vacation house on Cape Cod.

“He’s never been to Langley (the CIA’s Virginia headquarters),” said Sullivan. “The CIA has no record of him ever walking through the door.”

And the cover story really was foolproof -- there was no way anyone could have found out he wasn't a spy, unless they had, maybe, tried to verify his claims. And why would you go and do that? Besides, of course the CIA is going to claim they never heard of him, so why even ask?

In addition to the spy story, Beale also missed six months at the EPA in 2008, claiming he was "part of a special multi-agency election-year project relating to 'candidate security.'” And of course there was also a lot of first-class airfare and hotels and food, all of it reimbursed.

Since Beale "worked" in the EPA's office that directs policy on climate change, the usual climate change deniers will undoubtedly point to his case as evidence that all climate science is fraudulent; on that account, it's somewhat reassuring that Beale was so lazy that he didn't even bother to fake any science. He had a plane to catch, and colleagues to rescue, and a couple seasons of Desperate Housewives to catch up on. No time to actually fudge any numbers.

In a sentencing memo, Beale's attorney uses modern psychology, the "science of the mind," to request clemency for his client:

“With the help of his therapist,” wrote attorney John Kern, “Mr. Beale has come to recognize that, beyond the motive of greed, his theft and deception were animated by a highly self-destructive and dysfunctional need to engage in excessively reckless, risky behavior.” Kern also said Beale was driven “to manipulate those around him through the fabrication of grandiose narratives … that are fueled by his insecurities.”

We don't know about you, but we think these publicity stunts for The Secret Life of Walter Mitty are getting a little out of hand.