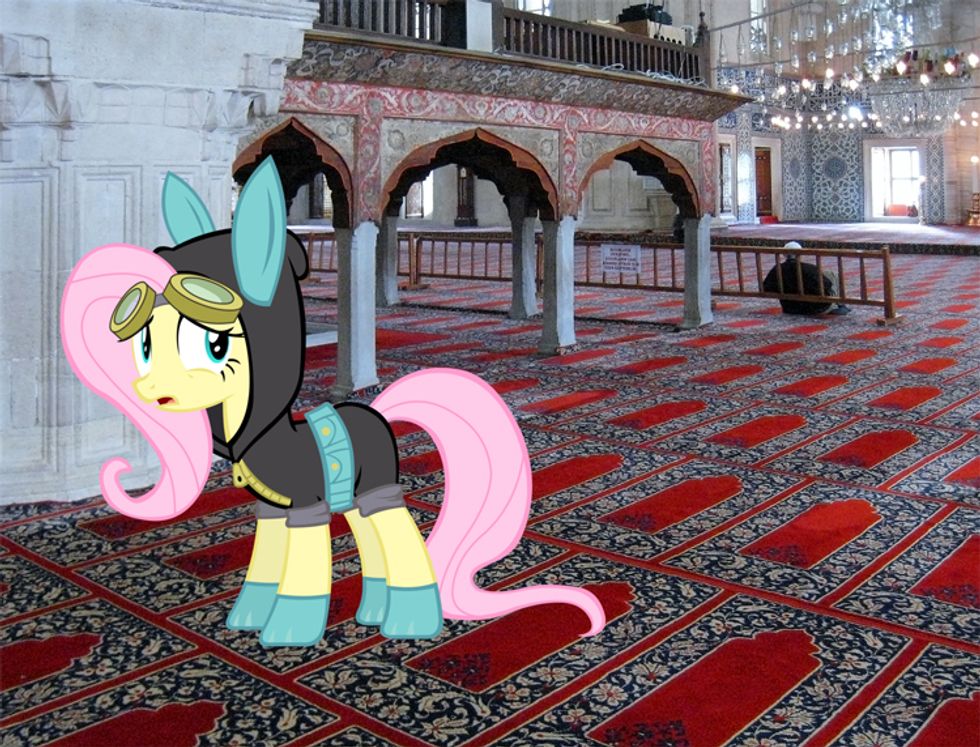 Here is the latest evidence that the entire nation has been taken over by Sharia Law (the creeping kind): On a field trip to a Denver mosque, girls will be required to cover their hair. What has this country come to?

Let's see how the cool heads at WND are describing the outrage:

The Douglas County School District in Colorado, under fire for saying that schoolgirls might have to cover up from head to ankle for a field trip to a Muslim mosque, has confirmed that such Shariah requirements will be enforced on the outing.

The piece helpfully links to the staff directory for Douglas County's School Board, so readers can share their concerns. The whole foofaraw was started by a local rightwing radio host, Peter Boyles, who found evidence of Sharia Law in a note sent home to parents of students in a seventh grade World Religions class:

The world religions field trip is next Tuesday, January 13. We will be visiting the Denver Mosque, the Assumption Greek Orthodox Cathedral, and the Rodef-Shalom Synagogue. We will then eat lunch at Park Meadows Food Court. Students must either bring a sack lunch or money to purchase lunch at the food court.

THERE IS A DRESS CODE FOR THIS TRIP: All students must wear appropriate long pants. Ankles must be covered. Girls must bring wide scarves or hooded sweatshirts for the mosque.

Scarves or hoodies? What has our once-great nation come to, that schools are forcing Sharia Law upon innocent schoolchildren who will be indoctrinated into thinking that Islam is a "world religion," when in fact it is a hydra of terrorism, oppression, algebra, and water fluoridation?

We're especially fond of this cut-and-paste article "by" Tim Brown at Bradlee Dean's Paranoia Emporium, which copies freely from the WND piece and another at EAG News. Suddenly, in the face of Radical Islam Sharia Law Terrorist Beheadings (i.e., the existence of a field trip to a mosque), the wingnuts have found their inner feminist:

“Islam dictates many, I believe – personal belief – repressive practices against women and Islamophobia will trump women’s rights,” Boyles said. “Animal rights every time, and the environment. That’s their belief – that’s wonderful. But don’t apply it to public school kids.”

He also went on to talk about the difference of visiting a place of worship on one’s own initiative and comply with the rules versus a school requiring students to comply.

And yes, that's pretty much cribbed with a few awkward word-order changes from the EAG News article. Under sharia law, Mr. Brown could get his mouse cord cut off for that.

The school board posted an explanation pointing out that participation in the field trip is not mandatory and that students have the option to not go:

For the past ten years, RHMS seventh-grade students take a social studies course that is partially focused on world religion. In the Douglas County School District (DCSD), we provide authentic learning experiences to all students. We teach students how to think, not what to think.

The social studies course includes a voluntary field trip to a Greek Orthodox Church, a Jewish Temple, and a Mosque. As with any field trip, our students and families are offered the choice to participate in the field trip -- it is not mandatory. If the decision is made to not participate in a field trip, alternative educational opportunities are provided. This is true for any DCSD field trip, including the RHMS world religion field trip. Students who choose to attend the RHMS world religion field trip are expected to respect the dress code of the host facility, but again, they may choose not to participate. Information shared with RHMS parents stated: "All students must wear appropriate long pants. Ankles must be covered. Girls must bring wide scarves or hooded sweatshirts for the mosque."

Big surprise: that line about asking students to "respect the dress code of the host facility" has been translated on rightwing blogs to mean "we bow to Sharia and are complicit in the subjugation of innocent children to the Jihad." Just to make sure people understood the connection between "respecting a dress code" and "doing jihad," the Daily Caller illustrated its story on the field trip with a photo of wanted terrorism suspect Samantha Lewthwaite, who of course got her start on a seventh grade field trip.

Not surprisingly, shrieking fear-harpy Pamela Geller warns her readers that this is just one more example of "Sharia in the classroom," and blithely lies about the nature of the field trip, claiming that the mosque visit is mandatory, and part of Common Core to boot (which it also isn't):

School girls at a Douglas County public school in Colorado are being forced to cover up from head-to-toe to visit a mosque on a school mandated Common Core trip. There are no requirements to visit a Greek Orthodox cathedral or synagogue.

Here again we see that anywhere American law and Islamic law conflict, it is American law that has to give way.

We were not aware that there's an American law requiring girls to go bare-headed, honestly. And what will happen if these poor seventh grade girls do cover their heads for some fraction of an hour while inside an ObamaMosque? It's pretty obvious, isn't it?

The subjugation and oppression of women are enshrined under the sharia. Young school girls should not be forced to “respect” a dress code that represents honor violence, female genital mutilation, forced marriage, child marriage, et al.

Strangely, we haven't seen anyone complaining that the students will be forced to comply with Greek Orthodox or Jewish law by not being allowed to wear shorts to those buildings, as is their absolute right under the U.S. Constitution. And heaven forfend that some year they go to a Roman Catholic cathedral -- submission to any rules there would involve endorsing rapey priests.

Still, we're pretty sure the Douglas County Schools foofaraw hasn't reached Peak Wingnut yet -- no one has insisted that the kids be allowed to carry a gun into a church, mosque, or synagogue.