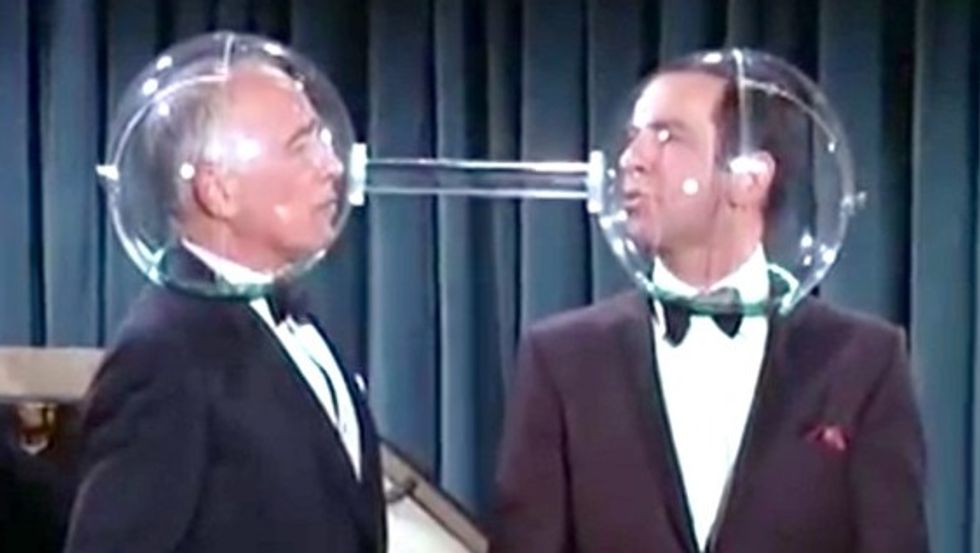 You don't even want to know how much the portable miniaturized version costs.

Check out this new wrinkle on Scott Pruitt's... no sentence should ever start like that, sorry. There's new information on Scott Pruitt's $43,000 secure communications booth, which was built into a former storage closet adjoining his office. Turns out that not only was it state-of-the-art and super-expensive, it was also installed in violation of laws limiting what agencies can spend on office renovations without congressional authorization, and the Government Accountability Office isn't happy. Oops!

In an eight-page letter to lawmakers, GAO general counsel Thomas H. Armstrong said the agency failed to notify lawmakers that it was exceeding the $5,000 limit for agency heads to furnish, redecorate or otherwise make improvements to their offices. In addition, Armstrong wrote, the agency also violated the federal Antideficiency Act, “because EPA obligated appropriated funds in a manner specifically prohibited by law.”

Ah but the EPA has a perfectly cromulent explanation for the expenditure -- about $25,000 for the prefab unit, plus another $18,000 in modifications to the space where it was installed (including pouring a new, two-foot thick concrete slab): It wasn't a "redecoration," so the cap wouldn't apply, plus, it would be really inconvenient for Pruitt to walk down to the basement to use the EPA's existing secure communications and information facility (SCIF).

Besides, when it comes right down to it, the in-office SCIF was just one more piece of office equipment, said the agency, and therefore

analogous to other functional items an employee might require to perform his job duties such as a high speed computer, high speed copier/scanner, or television.

And yes, that goes for Pruitt's titanium Post-It notes, too. Why do you ask?

Besides, this is really some swell secure communications equipment that was absolutely necessary for America's security. As any fool knows, Pruitt faces daily death threats, or at least tweets from people who think he's terrible, so leaving his office to use the SCIF in the basement would surely place him in danger from infiltrators.

Strangely, not everyone agrees:

“I don’t see a reason for it,” said John O’Grady, president of a branch of the American Federation of Government Employees that represents thousands of EPA employees. “For crying out loud, the guy is the EPA administrator -- not the CIA or the FBI.”

Hmm, sounds like one of those union thugs to us. May as well make that the "American Federation of Disgruntled Government Employees" and put this O'Grady guy on a watch list. Still, it's just vaguely possible Pruitt's demand for the cool office toy may at some point displease some of his allies, maybe, a little. Senator John Barrasso, the Wyoming Republican who chairs the Senate Environment and Public Works Committee, has asked for a “full public accounting” for the SCIFlet in Pruitt's office, and that's pretty darn harsh coming from a guy who complained, when Democrats on the committee called attention to the exaggerated claims of threats, that the Democrats were exposing highly secret security information. Barrasso may even give Pruitt a very stern wag of the finger and a warning not to do it again.

There's also the small matter of whether the SuperBooth is even an actual SCIF at all. Pruitt told an oversight hearing in December, "It’s necessary for me to be able to do my job," because of all the very important secure communications needed for his job, which is his. Funny thing, though:

No previous EPA leaders, however, have had such a setup. The agency has long maintained a SCIF on a separate floor from the administrator’s office, where officials with proper clearances can go to share information classified as secret. Pruitt’s aides have never specified what aspects of that facility might be outdated, or whether the unit now inside the administrator’s office meets the physical and technical specifications generally required for a SCIF. Even Armstrong noted Monday that the agency “did not state whether the booth has been certified” as a SCIF.

Yet here we are criticizing Pruitt for that outlay of money instead of praising him for saving the expense of getting the WonderCloset "certified" -- damn it, this administration is not about enhancing the administrative state, and damned if Scott Pruitt will be bullied into getting some egghead's "certification," thank you very much! Besides, it's pretty close to the real thing, maybe:

To install the booth, the EPA signed a contract last year with Acoustical Solutions, a Richmond-based company. The firm sells and installs various sound-damping and privacy products, from ceiling baffles to full-scale enclosures like the one picked by the EPA. Agency officials ordered a soundproof booth that typically is used to conduct hearing tests, but customized it at an additional expense to ensure private conversations.

“They had a lot of modifications,” Steve Snider, an acoustic sales consultant with the company, told The Post at the time.

Audiology, security, it's all stuff ending in "y," just like the days with a new Pruitt scandal, so lay off, will ya?

UPDATE: Oh, yeah, and then there's the lease on a brand-new Chevy Suburban, with BULLETPROOF SEAT COVERS, which Pruitt needed because Obama's EPA administrator, Gina McCarthy, had a lease on a smaller Chevy Tahoe, and that was not as nice or as large as a Suburban like other big-time government officials have. Plus another lease on a second Suburban that the EPA has not yet taken delivery of yet. No word on its seat covers' ballistic protection. The agency also renewed the lease on McCarthy's Tahoe, which is now sitting unused in an EPA garage. Maybe it can be converted to burn pure coal.

Yr Wonkette is supported by reader donations. Please click here to help us acquire a new desktop computer that doesn't freeze all the fucking time due to a "DPC Watchdog Violation." It's absolutely necessary for the secure production of quality snark.