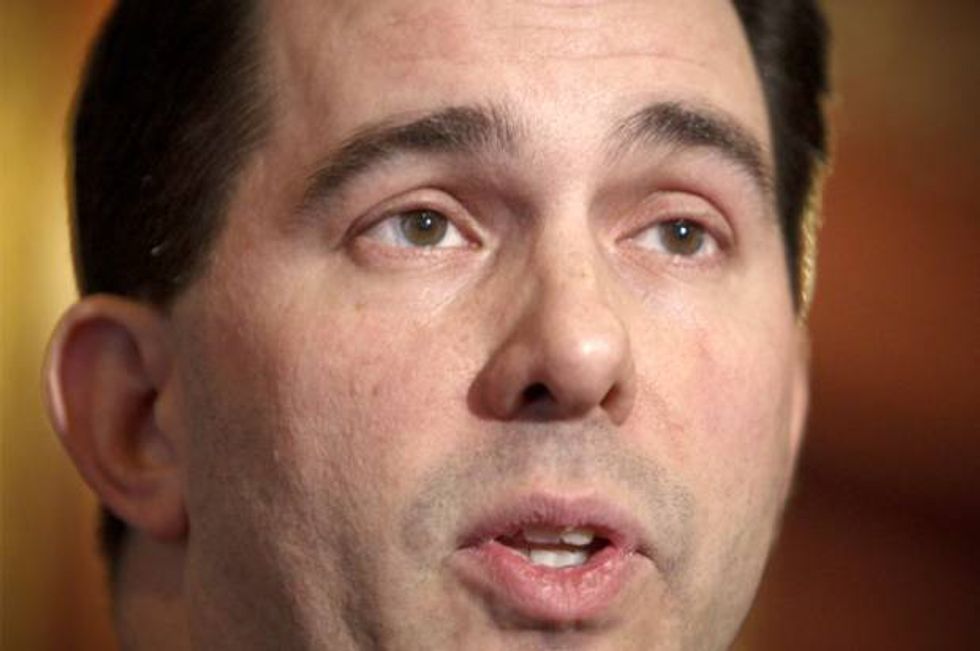 It’s a new year, which means government executives all over the country are in the midst of self-congratulatory presentations of cherry-picked accomplishments and passive-aggressively reading lists of future demands. It’s mostly trite and zzzzzzzz but some of them are worth your attention. Well, our attention anyway. You should spend time with the people you love.

Very Serious People believe Wisconsin Gov. Scott Walker is a formidable contender for the GOP’s 2016 presidential nomination. He is constantly winning elections as the scrappy upstart with only about 800 percent more resources than his opponents. He’s a cult hero (Order O’ Plutocrats) for screwing over public employees. Some believe he finds the GOP Sweet Spot (gross) between Legacy Spawn (Bush/Romney/Paul), Unhinged Retreads (Huckabee/Santorum), the Wholly Insufferable (Cruz/Christie) and the Ah, Never Mind (Perry). And since we’re only like 600 days away, it’s never too early to speculate. [contextly_sidebar id="z3KXJyNwniRBTuaz49QLXqgzL3Onp4oy"]

On Tuesday, Walker delivered his State of the State Address. While he hasn’t officially declared his candidacy, there are plenty of signs pointing to a forthcoming campaign. So we ask: Does this Smirking Taint Sponge have what it takes to unite the insanely rich and the merely insane? Let’s take a look at some key components for presidential aspirants.

Walker is essentially *cover your eyes, conservatives* a career politician. He doesn’t have the terrific personal wealth of preeminent outsourcer Mitt, or trickle down bucks from a grandfather who sold guns to Nazi Germany like Jeb. What he does have are thin wires connected to the Koch’ brothers fingers. He will toast Sheldon Adelson with the most sincere Molotov! He will take your money and probably do your bidding. And you can save your piddling $10 donations. (Not really, he’ll still take them but you’re not getting a Christmas card.)

Now that we've determined Walker should have a puncher's chance at campaign funding, let's delve into his actual State of the State Address. One thing about perpetual presidential campaigns is that you don’t want to peak too early. So Walker is going to have to maintain a high level of rah rah to keep this up:

“Much like our military and the Packers, tonight, I am proud to report the state of our state is strong.”

[Here’s a brief sportsball aside. The Packers are a successful and beloved NFL franchise dating back about 100 years. They also happen to be the only publicly-owned, non-profit professional sports franchise in America. The team is so old they were grandfathered in when the NFL decided to outlaw this organizational structure because while thieves, murderers and woman-beaters are cool, there’s no room in any $elf- respecting cartel for this socialist bullshit.

In the days leading up to last weekend's game against the Dallas Cowboys, Walker repeatedly teased newly discovered Cowboys' fan Chris Christie. The prior week, Christie was seen trying to hug Cowboys' owner and creepy, wildcatting oil billionaire Jerry Jones in a real Dukakis-in-tank moment for the big fella. Quite a not nice move from Jones since Christie helped steer an $875 million Port Authority contract to one of his companies.

Walker, in turn, used Christie's embarrassing moment as the vehicle by which to unload this monster pander bomb.]

So when it comes to governing, Walker is a ruthless free market champion.  But when it comes to football, which Americans care about way more than state budgets, he's an everyman socialist. These sniveling chameleon attributes should serve him well. +4 Reagans

These are really important for a governor trying to make his case as a presidential contender. We’re so intimidated by math that just reading sentences with numbers makes a person sound 29% more legitimate (or about twice as legitimate).

“The unemployment rate that peaked at 9.2 percent in January of 2010 is now down to 5.2 percent. Trends show it will continue to drop this year.”

Wisconsin’s unemployment rate essentially mirrors that of the entire country (9.8 to 5.6 over same period). So thanks Obama? Haha no. In fact, Wisconsin’s wage growth has lagged behind the nation and the actual job growth has been relatively brutal since Walker took office. But pish posh, 5.2 sounds like a nice number.

Hey great point, Scott. Who needs a material uptick in wages when you're saving enough in property taxes to purchase almost a whole winter tire? You know who that $141 is really going to help? The retired teacher who’s losing thousands in deferred compensation thanks to your radical policies. Oh wait, she’s now sleeping on her son's couch and enduring constant death stares from her daughter-in-law.  :(

"Budget reforms over the past four years reduced the burden on the hard-working taxpayers of this state by $2 billion, and we will continue to reduce that burden every year that I am in office."

$2 billion you say? While ignoring health care and pension losses for the state's public employees, Walker is touting a healthy, lean state government that must've spent the last 4 years P-90x'ing with Paul Ryan. But maybe those cuts to property taxes, corporate + personal income taxes (mostly for the rich, becuz trickle) are not totally sustainable.

But who cares if Wisconsin turns into Great Lakes' Kansas? By that time he'll be on his way to the White House swapping out the Al Green records with some BoDeans mixtapes. C'est la vie, assholes. +4.5 Reagans

If you listen closely, you can almost hear the 2016 campaign ramping up with good ol' GOP standards.

"And speaking of what is best for our students, I call on the members of the state Legislature to pass legislation making it crystal clear that no school district in the state is required to use Common Core standards. Going forward, I want to eliminate any requirement to use Common Core."

Wow that Common Core requirement sounds really burdensome if Common Core was actually a requirement. But it’s not, despite its adoption and Walker's previous support. Gee, I wonder if this will be a problem for Wisconsin schools applying current standards...

In fairness to Walker, he's dealing with a GOP legislature still feeling its oats after being out of power for years. Their sweet new boondoggle is a proposal to turn any "underperforming" public schools into charters + dole out vouchers so for-profit Big Learnin' can get theirs. We'll see which way Walker sways.  For the children obviously.

Say you have a government agency with a scary commie sounding name like the “Department of Commerce.” Leave it over there, "there" being the garbage. Now, take some public money and start a nice sounding agency like the “Wisconsin Economic Development Corporation.” Economic Development? Oh, I'll have some of that. Corporation? That person sounds like the opposite of BIG government agencies.

Then funnel that money to targeted parties and let the staff buy ipads and beer because deferred compensation in the form of pensions is what’s really wasteful.

the WEDC has not done a good job of that since it became operational in July 2011 under its former CEO, Paul Jadin. The former Green Bay Area Chamber of Commerce president left the position after 16 months amid reports of a lack of oversight of $56 million in loans.

Is everyone ready for a scalding hot take? This might be why the ALECseses of our nation are into Scott Walker. It’s not about small government or better government, it’s about quasi-private partnerships with Biz-ness that have virtually no transparency or accountability and can steer tax dollars to friendly places. So definitely give this agency more power is what Walker 2016 is saying.

For campaign purposes, it's also important to know what words to avoid. The word "health" (let alone "health care") was not mentioned. Smart move for someone who turned down $40+ million in federal money to establish a state exchange and help improve Medicaid systems. From 2014 (good riddance to that year):

Despite the dire predictions, the cost of health plans sold on the marketplace set up under the Affordable Care Act are increasing next year at roughly the same rate as past years in Wisconsin — and several insurers are even lowering prices.

Good blanket omission by Scotty.  However, Walker only said "freedom" 8 times in his State of the State, so he has work to do for the primary.  +2.5 Reagans

Walker has withstood an impressive list of controversies in his brief tenure as chief executive.  This roach-like resilience should not be ignored.

We have the Deputy Chief Of Staff Jailed For Looting Veterans' Funds!

Racist emails from the staff? Check.

Charge supporters to pray with him (Jesus only probs)? Not so much a scandal as just a ballsy display of hubris.

Voter ID blocked by the Roberts(!) Supreme Court? You betcha.

Alleged campaign funding and ethics violations in an era when it's nearly impossible to accomplish this feat? Ongoing. Tediously ongoing.

So has he weathered? And how! +4 Reagans

Folks, in closing, that's an impressive 18 Reagan units.  Something tells me we'll be hearing from Walker come primary season. And that something is the Governor himself.  The smarmy, smarmy Governor. See ya soon!