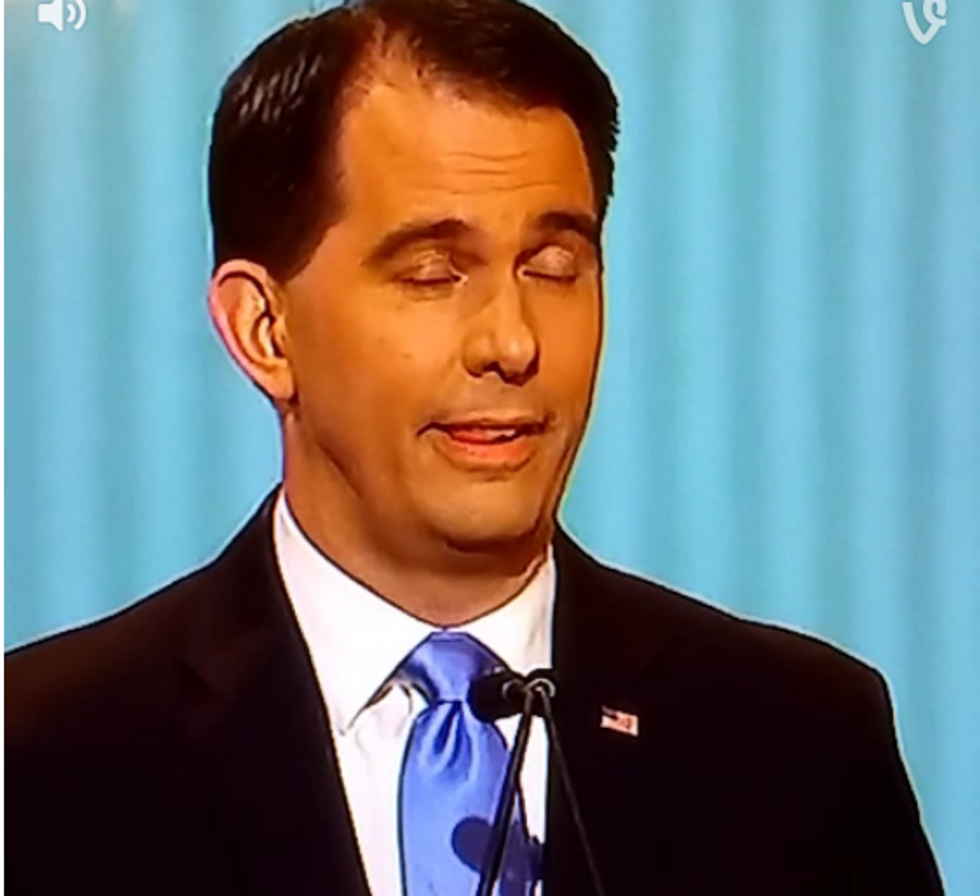 We finally realized what Scott Walker's dumb face reminds us of: MST3K's Joel Hodgson *pretending* to be a dipwad.

Ladies and gentlemen, we would just like to apologize for all the times we've suggested that Scott Walker isn't very bright, because we finally understand where he's coming from. It's not that he's too stupid to answer questions like whether evolution is real science, or where gays come from. It's that he simply does not choose to answer questions that have no bearing on his immediate reality, because really, what's the point? It's a crazy ol' world out there, and if you go saying that you believe a thing is "true" or "untrue," or that we should do a thing, or not do it, then you are moving away from reality as it stands right now, and that is a metaphysical ball of wax that Scott Walker is simply not going to get his fingers all waxy with.

Case in point: the Syrian refugee crisis, in which hundreds of thousands of Syrians are trying to escape their country's civil war. Asked by ABC News how the United States should respond, Walker didn't merely avoid answering the question; he denied the very possibility of answering the question:

ABC News asked Walker how he would respond to the massive influx of refugees from Syria if he were president today. He explained that the query was flawed. As he is obviously not president, Walker argued, there is no way that he would be able to answer that question. “I'm not president today and I can't be president today,” he said. "Everybody wants to talk about hypotheticals; there is no such thing as a hypothetical" -- a sentence that probably would have moved Socrates to set Walker's pants on fire himself.

We're now convinced that if Scott Walker were omnipotent, he very definitely couldn't create a rock denser than his own goddamned head.

But it's a hell of a dodge, and as New York Magazine's Jaime Fuller points out, it's a convenient "secret cheat code" that allows him to never answer a question about policy, because he's not president, and until he is (and he won't be), he can never really say what he'd do. It's also bullshit of the highest order, of course. Besides, Walker really does have an answer to the Syrian refugee crisis, or at least a pretend answer that's every bit as hypothetical as the reporter's question:

“I'm talking about what I would do as president, that'll be a year and a half from now." He hypothesized that he will "take on ISIS as president."

That's pretty good, and it also completely ignores the reality that people are dying, right now, trying to get out of Syria. The photos of little Alan Kurdi, the 3-year-old who drowned along with his mother and 5-year-old brother, when their boat capsized a week ago, aren't hypothetical -- although you'll be delighted to know that rightwingers are now redefining his death out of relevance because maybe his family wasn't quite desperate enough for their standards. So maybe Walker is on to something. If we decide that other people's problems are all hypothetical, we can close the borders, refuse to even talk hypothetically about taking in any refugees because they're all just hypothetical terrorists anyway, and maybe pass some tax cuts while we're at it.