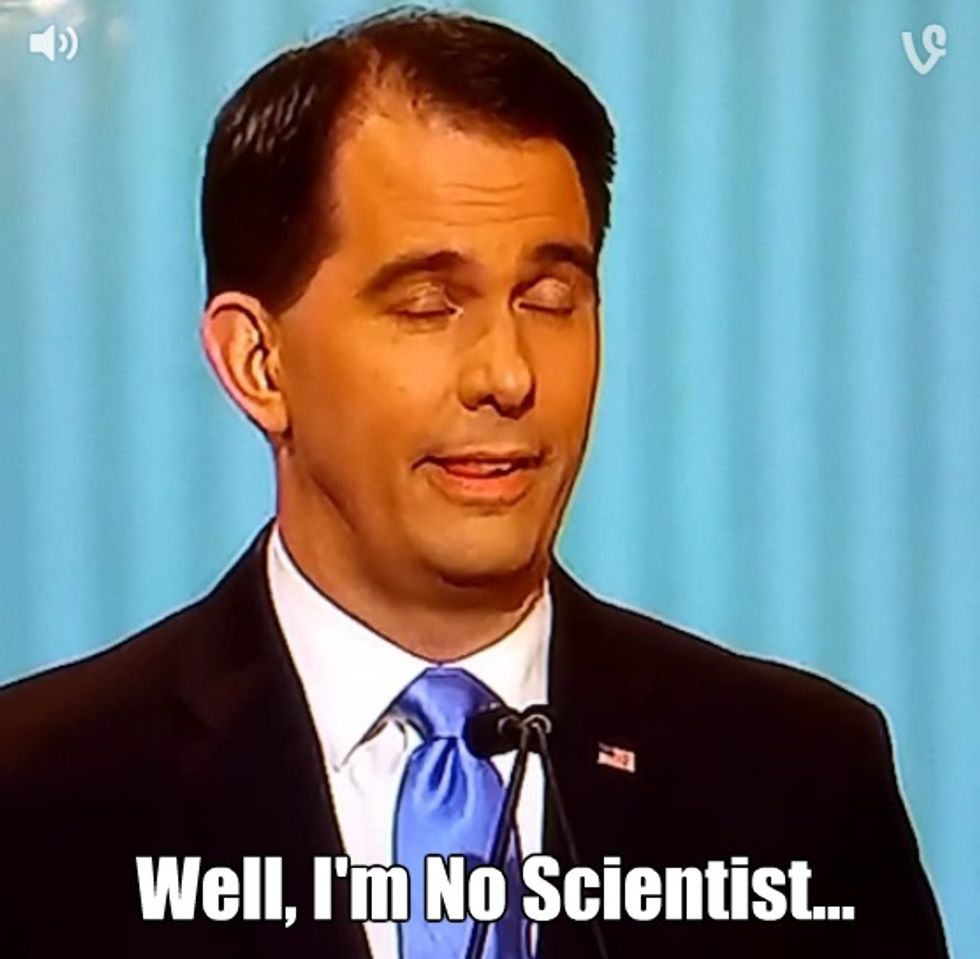 ...But I know what the Koch brothers say science is, and that's good enough for me

Remember when Scott Walker was a hot presidential prospect for about six minutes, and then he went to London and refused to venture a guess at whether evolution is real, and looked even more stupid than most Republicans while doing it? Well by golly, when it comes to other kinds of science, Walker is not confused at all. He knows, for instance, that climate change is a very controversial subject among people who are Koch Industries, so he's made a concerted effort to make sure state policy is uncontaminated by too much science. That admirable decisiveness is showing, in the form of a state website that used to be about "Climate Change and Wisconsin´s Great Lakes," but has now had every mention of "climate" -- or for that matter, real science -- carefully scrubbed away.

As Scientific American reported way back in 2015, Walker has "moved to reduce the role of science in environmental policymaking and to silence discussion of controversial subjects, including climate change, by state employees." He's dismantled environmental regulations, and attempted to slash staff at the state Department of Natural Resources, getting rid of a third of its scientists and firing a bunch of the department's "environmental educators," because why would you waste state money on spreading liberal propaganda to innocent schoolchildren? And just like Rick Scott did in Florida, Wisconsin also tried to prohibit state workers from even saying the "C" word at all.

And then there's that website. Urban Milwaukee columnist James Rowen details how the DNR's website has been purged of any science whatsoever, changing a page that had actually been a pretty decent introduction to how climate change is affecting the Great Lakes into a couple of paragraphs of shrugging and saying, gosh, we dunno. Thanks to the Internet Archive, here's a partial screenshot of what the page used to look like:

So you got your climate change right in the heading, clear references to human activity and emissions of greenhouse gases, a record of how the climate has been affected, and even predictions of what's on the way, plus three resources where you can learn more -- very well done! In its original form, the page went on to explain, "Climate change is mainly the result of rising CO2 levels in Earth´s atmosphere," and offered visitors a link to check actual CO2 levels and why they matter. That's gone now, as is another link to the EPA's climate change website, with a note saying "General climate change information and actions we can all take to help (includes a special section for teachers and students)."

The DNR page, which was neutered December 21, now has only a single reference to "climate change": its URL is still dnr.wi.gov/topic/greatlakes/climatechange.html, but that's it. And just look at all the science that isn't there any more:

Earth is changing! We don't have any idea why, and it's not our job to ask -- that's being researched elsewhere. Effects? Who knows? We had some science stuff about that a month ago, but our bosses made us take it down. Hey, we're the Department of Natural Resources, and we're not here to answer any of your stupid questions!

At least the links still go -- for now -- to sites run by the University of Wisconsin, and not to a climate denial outfit like, say, the Heartland Institute, but where the old links went to sites that said "climate change" -- and included a site for grade 7-12 teachers -- now there's none of that nonsense either. And if you want to find that teacher's guide, it's still archived, but the original URL gets you only a 'page not found" notice. It was pretty while it lasted, but just look at that controversial liberal indoctrination right in the table of contents:

In his column, Rowen calls the changes "Orwellian and propagandistic." But they accurately reflect the scientific consensus inside Scott Walker's head and the Republican party, which is that the world is a great big mystery we can't hope to understand, beyond the fact we can dig lots of coal and oil out of it and make things go. Sorry, kids. If you want to learn about "climate change," you'll have to get out of Wisconsin. Or learn to use the Internet Archive. Maybe if science is deemed too controversial for kids to monkey around with, they'll start looking for it as enthusiastically as they used to try to find dirty words in dictionaries.

And Wisconsin's environmental agency? Easy enough to deal with that. Just change the acronym from "Department of Natural Resources" to "Do Not Resuscitate."