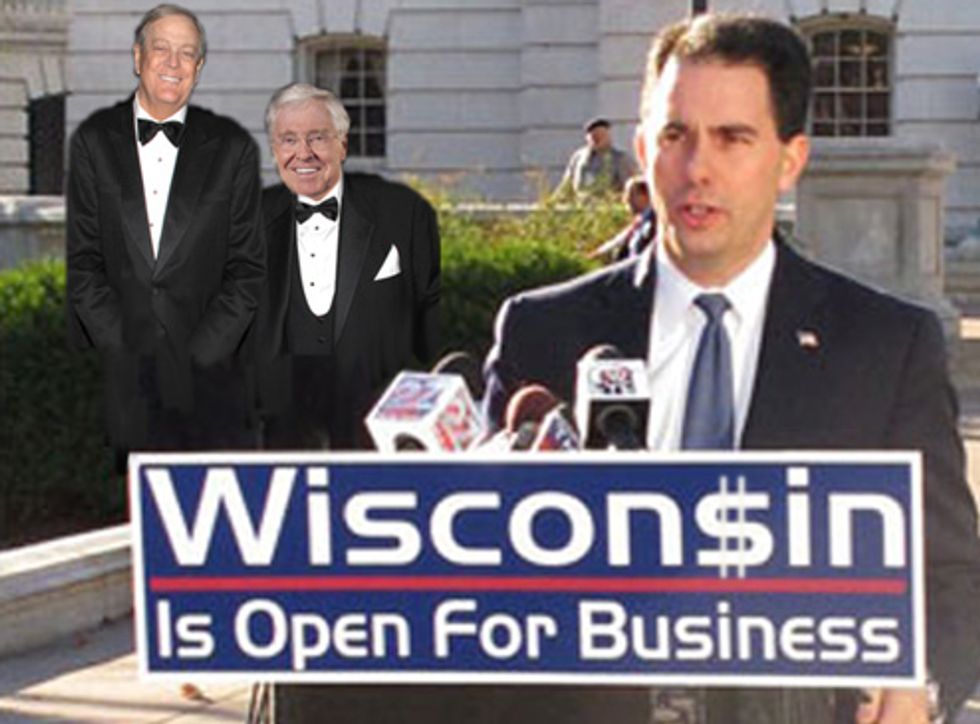 Squinty Koch-worshipper Scott Walker, behaving in his familiar cartoon villain fashion, removed a specially commissioned David Lenz painting of three disadvantaged Wisconsin kids skipping down a snowy street from the mantelpiece of the governor's mansion. This seems about right, because the smiling faces of poor children probably leave scorch marks on Scott Walker's soul.  Show him a painting of some suffering, hungry children and he'll putthat into the statehouse next to his statue collection of unemployed teachers with untreated illnesses. The painting, which was part of a series of paintings with "subjects intended to remind state leaders of the people they represent," was replaced by a painting of a bald eagle. Scott Walker likes to be reminded of eagles, the people who elected him. FREEDOM WINS.

From the Milwaukee Journal-Sentinel:

In an interview, Lenz said he carefully selected the three children portrayed in "Wishes in the Wind." The African-American girl, featured in a Journal Sentinel column on homelessness, spent three months at the Milwaukee Rescue Mission with her mother. The Hispanic girl is a member of the Boys and Girls Clubs of Greater Milwaukee. And the boy's father and brother were killed by a drunken driver in 2009.

"The homeless, central city children and victims of drunk drivers normally do not have a voice in politics," Lenz explained in an email. "This painting was an opportunity for future governors to look these three children in the eye, and I hope, contemplate how their public policies might affect them and other children like them."

He added: "I guess that was a conversation Governor Walker did not want to have."

No, Scott Walker cannot have this conversation about poor children, because they do not really exist. [Milwaukee Journal-Sentinel via ThinkProgress]