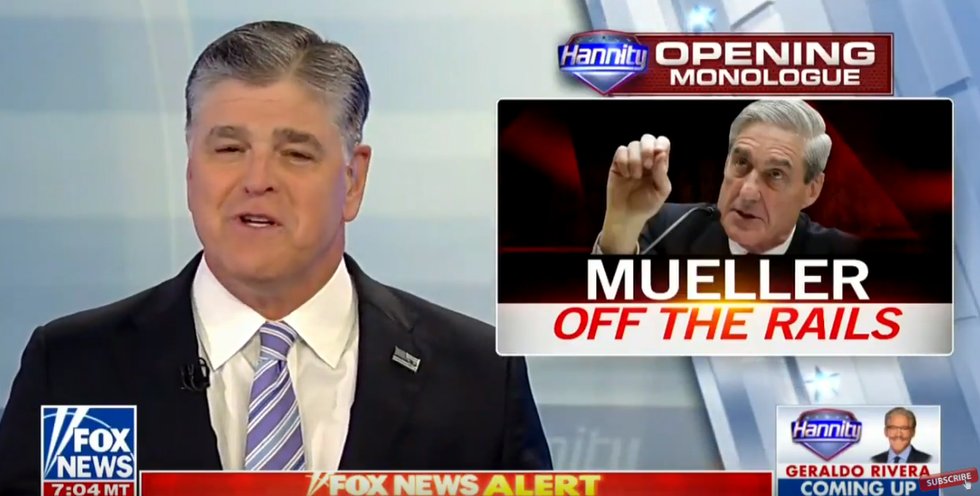 This week news broke that special counsel Robert Mueller is asking witnesses to hand over their Obamaphones, so that he may check to see if they are using encrypted apps like Signal and WhatsApp to do conspiracies with Russia or any other crimes. It's timely because we also learned this week that the second Paul Manafort bailed his own ass out of the pokey, he immediately started WhatsApp-ing his co-conspirators and asking them to lie to investigators. You can be sure that if Mueller is asking for such stuff, he already knows he's going to find evidence there.

But if you are Sean Hannity, who is almost certainly tied up in this investigation in ways we still don't know, THAT IS UNFAIR. So Hannity had some advice on his show Wednesday night, and it is that Mueller witnesses need to smash their phones and put their phones through a paper shredder and throw their phones to the bottom of a lake and launch their phones directly into the sun in order to destroy the evidence, because that's not illegal or anything. (Oh wait, it is illegal! You can go to jail for 20 years for doing it!)

To be entirely fair to Hannity, he's not being totally serious about advising witnesses in the biggest political scandal in American history to break the law by destroying evidence. He's only saying this because he's a fucking idiot who believes his own conspiracy theories.

Watch the video and read the transcript below, you'll see what we mean:

If I were to advise to follow Hillary Clinton's lead ...

Delete all your emails and then acid-wash the emails on the hard drives and your phones, then take your phones and bash them with a hammer to little itsy bitsy pieces, use BleachBit, remove the SIM cards ...

Because that is TOTALLY what Hillary Clinton did, if you are Sean Hannity and the assembly line that leads from your brain to your mouth is a never-ending bowel movement of easily debunked bullshit. (Because literally everything wingnuts believe about what Hillary did with her emails is untrue.)

... and then take the pieces and hand them over to Robert Mueller and say: 'Hillary Rodham Clinton, this is equal justice under the law.'

"How do you think that would work out for everybody who Mueller's demanding their phones of tonight? I'm certain the result would not be the same as Hillary's."

Possibly because Hillary Clinton didn't actually do that shit?

This is the problem with waking up every morning and looking in the mirror to find that for some ghastly reason you are still Sean Hannity. Everything you hold dear is a lie, the only people who love you are unfuckable Fox News viewers who are gonna die of old age/preventable fireworks accidents within a few years, and on top of all that, your face looks like this:

And before you know it, you're on TV actively encouraging people to commit crimes.