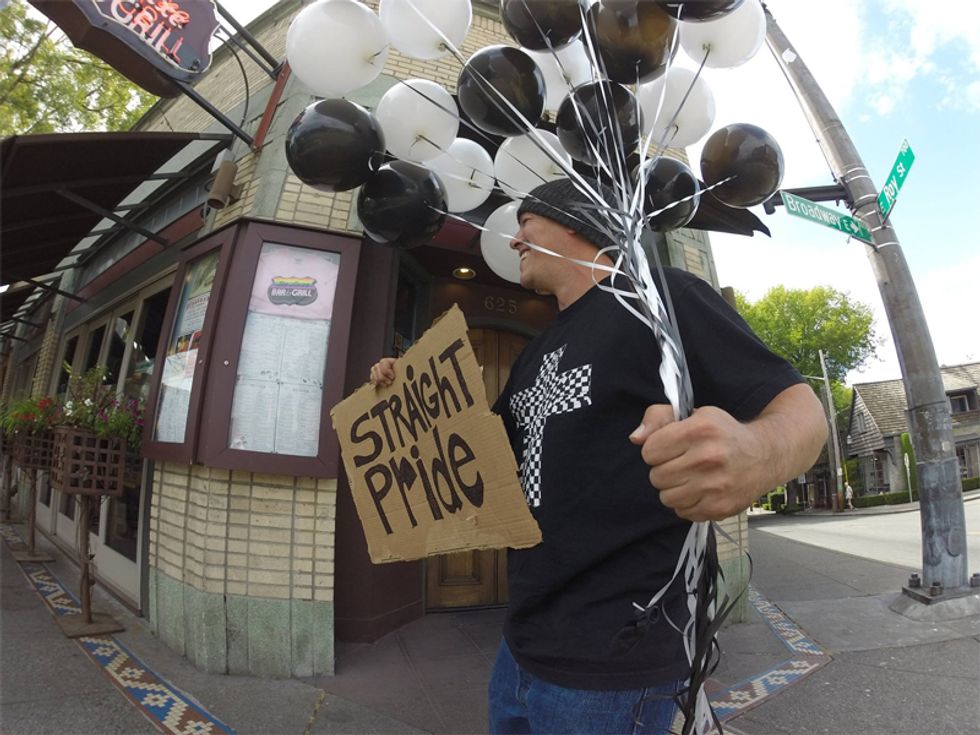 This just in: Seattle's straight community has been so completely bullied into silence by The Gays (and maybe their close allies, Creeping Sharia) that a big Heterosexual Pride Parade announced for this weekend drew a very dissatisfying number of marchers. We mean disappointing even in comparison to that huge demonstration by Ex-Gays in Washington DC a couple years back, which instead of tens of thousands, had under a dozen people show up, plus some press. What we mean is, actually, ONE GUY, the organizer, a gent named Anthony Rebello, showed up and paraded on Capitol Hill on Saturday.

The "event" even had a Facebook page, with this cheerful inclusive announcement:

And 172 people said on Facebook that they were going, too, which just goes to show how reliable people often turn out to be. For all his talk of just wanting gay and straight people to respect each other, Rebello's own blog, "Smile me a River," offered some less-than-smiley thoughts back in June, right after the Supreme Court crammed marriage equality down the nation's throats:

I think it's a trend. A cry for attention. From your government, a distraction. For $. I have previously stated how I feel about marriage in this post: MARRIAGE I have also created an event: Heterosexual Parade Gay Mafia? Maybe animals should be allowed to get married? Would they govern and tax them too? While they're at it, how about equal rights for insects? In my opinion, there is a difference between a man and a woman. If you can't appreciate those differences, you can't enjoy those differences. I don't agree with boys turning into girls, and I don't agree with girls turning into boys. The word/meaning of "Pride" doesn't belong to the gay/lgbt community, it belongs to everyone. That includes us good old fashioned straight people. The way I see it, in my opinion, some boys never turn into men, and some girls never turn into women. What a shitshow.

"Welcome to the other side of the rainbow" Really? No thanks.

Gosh, and to think he didn't get a lot of support! And by "not a lot" we mean "none at all." Still, when you're the only one marching, you don't have to worry much about keeping in step or keeping your ranks straight, so to speak. (Just a little heterosexual humor there -- did you know that many famous comedians have been straight? It's true!)

Obviously, though, this is all the gays' fault, because Rebello invited them to come and protest too, and did they even show up to oppose him? No, they did not. How's that for silencing? And in fact, Rebello explained that the reason his parade fizzled was that hateful gay people -- seriously, they all just hate, hate, hate, all the time -- had scared away all the other proud straight people. You know how those scary gays are, with their invisible terrorism.

This is a positive event that the LGBT community tried to turn into something negative – not everything has to do with gay people.

A lot of heterosexuals don’t want their pictures taken because they are scared of the LGBT community.

And while this year's parade kind of sucks, Rebello is already planning for next year's event, set for Sunday, July 24. And maybe between now and then, he'll have a "White History Month" party and take some Men's Studies courses.