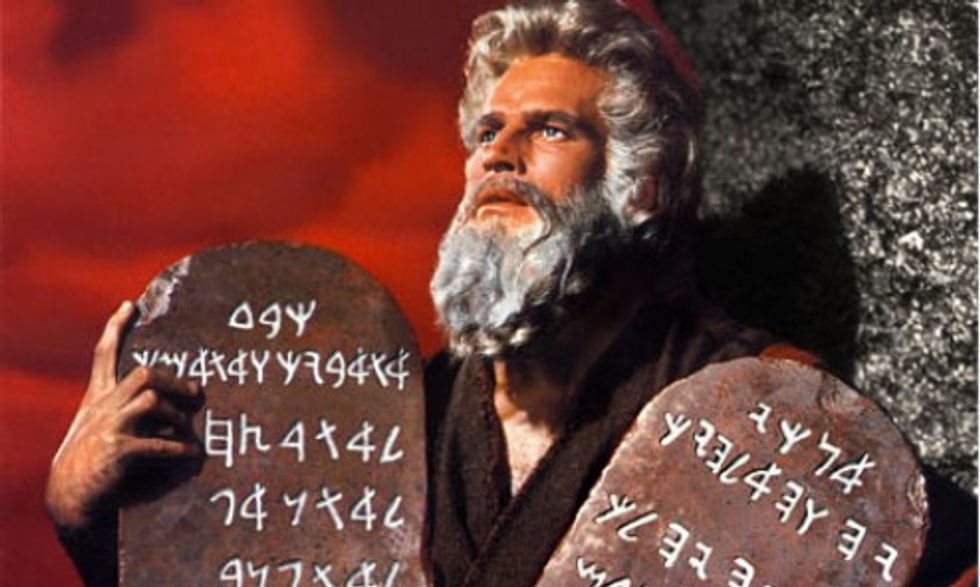 Are you a homosesssican flavor of Wonkinican? If so, you may be extremely alarmed to discover thatRenew America has discovered the heretofore incredibly seeekrit bargain you have with Satan to take over the whole world with your gay gayness. Yes, some random wingnut on the internet is going to take you down and expose you for the Satan-worshipping-buttsecks-having monsters that you really are by telling the world about your gay commandments, or Satan's commandments to you to be gay, or something something:

The Bible tells us that Satan has the ability to "appear as an angel of light." Nowhere is this more evident than in the radical attempt to promote homosexuality in society today as something good. For the purpose of deceiving Mankind and destroying souls, Satan has thus given the homosexual lobby the following 10 commandments.

Shut up you big babies we're not going to cut and paste the entire list of ten because apparently Satan is a really wordy motherfucker that has to overexplain his dictates. Props to Judeo-Christian God for being much more concise. We will hit the highlights for you though. Let's look at a chunk of SatanCommandment #3, shall we?

Keep in mind that politicians and judges are your friends. Many of them are openly practicing homosexuals and the rest, swayed by power and the almighty dollar, will do anything for your vote.

This super-gay part of yr Wonkette would like to go live in this alternate world where homosexuals run everything and are very rich. What else has Satan commanded the gays to do?

7) Confuse the distinction between "hating the sin" and "loving the sinner." This is an absolute must since everyone – especially parents – know the time-honored value of disciple and "tough love." This can be effectively achieved by introducing special "anti-bullying" laws into schools that aim at protecting homosexuals from the enemy.

This is only a small part of Commandment #7. Be thankful that we didn't make you read the whole thing, because this bit is certainly nonsensical enough. If you do hate the sin but love the sinner, you should hate anti-bullying laws because if you do distinguish between the two you love bullying or there is no such thing as bullying or...damn. Satan's commandments are really tough to parse you guys. Maybe it is because Satan needs to cram about 8 concepts into a single commandment:

9) Assure everyone that no religion will be made to suffer from societies' acceptance of homosexuality. Speak always and often of equality and co-existence. Claim, as a sham, snare, and illusion, that tradition marriage and homosexual marriage can live side-by-side in complete harmony. Dismiss as silly and unviable any attempt to show that the "Pill" – which was introduced to separate and tear asunder the act of sex from the gift of life – has led to the disintegrated of the family. At the same time, and wherever possible, work diligently behind the scenes to drag your religious opponent into court whenever his moral values even begin to clash with yours. Test and try every court until you find a judge who is your friend. Especially work on religious adoption agencies and church ministers who lecture on the evils of homosexuality and same-sex marriage in their sermons. Where this is not possible infiltrate the priesthood so as to corrupt religion from within.

Jesus, gays. It must be fucking hard to follow all these rules. Satan Catechism must SUCK if you have to memorize all this. Allow yr Wonkette to nail just one thesis to a metaphorical door and give you homosexuals just two easy-to-follow commandments:

[Renew America and h/t to Right Wing Watch, who are doing God's work by digging up this dreck]