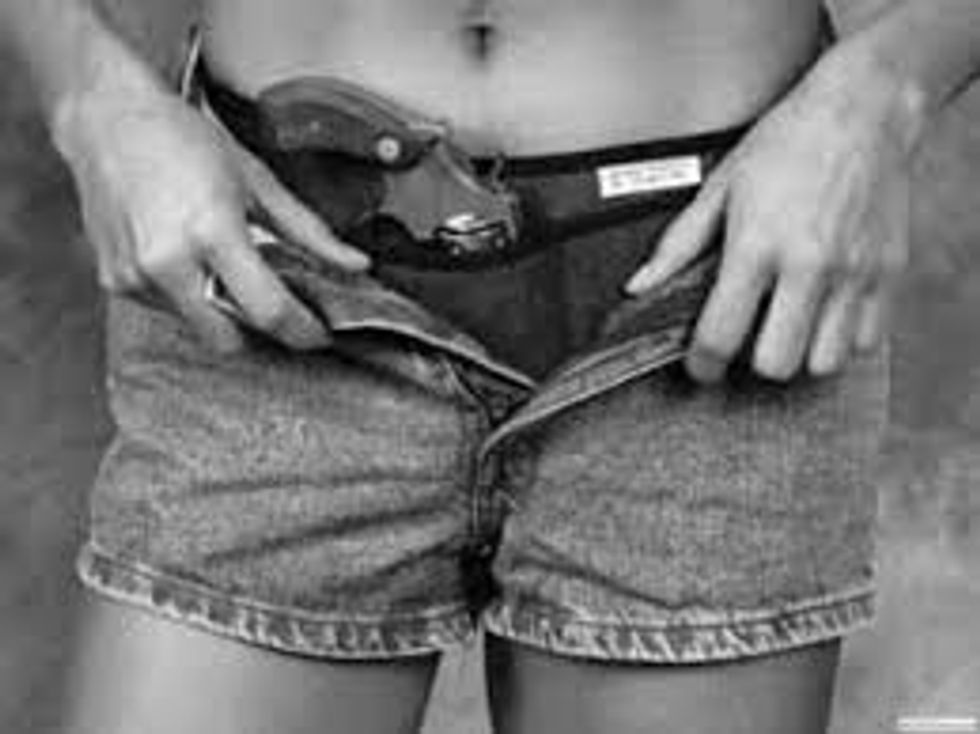 You might all be surprised to learn that sometimes at Wonkette our language is, shall we say, less than decorous. You are shocked, we know! But 'tis true! We lovingly let people know they can eat bags of dicks and we never miss an opportunity to remind you that Jim Hoft is the stupidest fucking man on the face of the internet. But you know what we generally do not do, Wongarians? Unlike the illustrious Mr. Pete Santilli, we do not have a radio show where we call for the genital-shooting of people under Secret Service protection, because jesus that is dumb:

‘Miss Hillary Clinton needs to be convicted, she needs to be tried, convicted and shot in the vagina,” he said. “I wanna pull the trigger. That ‘C U Next Tuesday’ has killed human beings that are in our ranks of our service.

Isn't it nice that he was too delicate to say the word "cunt" while threatening to SHOOT SOMEONE IN THE VAGINA?? This seems like a rather skewed value system but maybe that is just us?

Apparently he does not just wish to murder Hillz' vagina because of BENGHAZI!!!1!! but also too because she killed Navy SEALS or something?

"I want to shoot her right in the vagina and I don't want her to die right away; I want her to feel the pain and I want to look her in the eyes and I want to say, on behalf of all Americans that you've killed, on behalf of the Navy SEALS, the families of Navy SEAL Team Six who were involved in the fake hunt down of this Obama, Obama bin Laden thing, that whole fake scenario, because these Navy SEALS know the truth, they killed them all."

Let us be the first, but certainly not the last, to indicate that perhaps Mr. Pete Santilli might consider valium or weed or yoga or SOMETHING because good lord man, that is a lot of weird incoherent rage to carry around.

Are Mr. Santilli's sad mad feelings limited to Hillary, you ask? OF COURSE NOT:

"Barack Obama is moving drugs through the CIA out of Afghanistan and Barack Obama needs to be tried, convicted, and shot for crimes against the United States of America.”

So Hillz gets shot in the vag and has to die slowly but Bamz just gets the quick death for being a drug pusher? That does not seem fair!

Unsurprisingly, the Secret Service is following up, so expect the usual howler monkey-ing from the right about how free speech is dead because if you can't explicitly threaten the horrible death of a President and a former Secretary of State, then the terrorists have already won, civilization as we know it will end, and there is no Santa Claus.