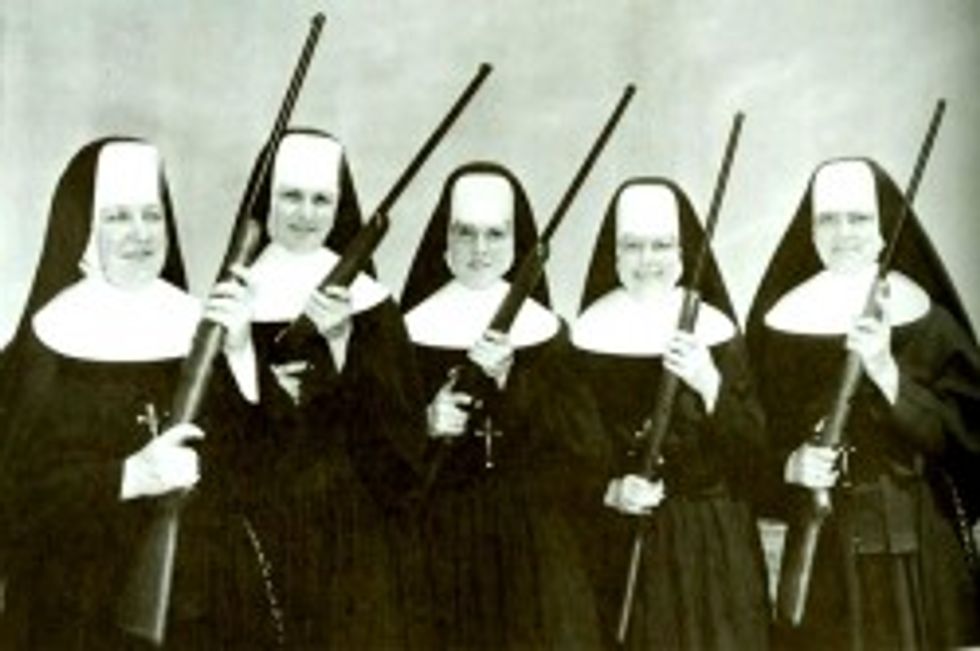 Like everyone else in the nation, we have grown used to the stream of wingnut "gubmint gon' steal ur gunz" Second Amendment action-alert emails always emanating en masse from the AOL accounts of America's loony cousins and neighbors, OR, apparently now, from a U.S. Senator!Mother Jonesspotted pantsless prickRand Paul sticking his name on one of these ALL CAPS WITH UNDERLINESspam forwards warning everyone that the United Nations space ninjas are fixin' to steal their guns, which is of course is totally false panic for several zillion reasons. But the best reason we have read just today is because the U.S. government is not so much interested in stealing guns as it is in forming secret, oversight-free panels to type up "kill lists" for American citizens they do not like.

So let's do a little compare and contrast. Here is some of the fake freak-out from Rand Paul's spam:

Secretary of State Hillary Clinton recently announced the Obama Administration will be working hand-in-glove with the UN to pass a new “Small Arms Treaty.”

Disguised as an “International Arms Control Treaty” to fight against “terrorism,” “insurgency” and “international crime syndicates,” the UN’s Small Arms Treaty is in fact a massive, GLOBAL gun control scheme.

Ha ha, that's a cute fictional bedtime story, but it is not nearly as terrifying as this one, from a Reuters report detailing the secret death-panel-kill-list the National Security Council is compiling in its free time:

American militants like Anwar al-Awlaki are placed on a kill or capture list by a secretive panel of senior government officials, which then informs the president of its decisions, according to officials.

There is no public record of the operations or decisions of the panel, which is a subset of the White House's National Security Council, several current and former officials said. Neither is there any law establishing its existence or setting out the rules by which it is supposed to operate.

The panel was behind the decision to add Awlaki, a U.S.-born militant preacher with alleged al Qaeda connections, to the target list. He was killed by a CIA drone strike in Yemen late last month.

The role of the president in ordering or ratifying a decision to target a citizen is fuzzy. White House spokesman Tommy Vietor declined to discuss anything about the process.

Now, see, THAT is a terrifying story that wingnuts/everyone/humans should worry about. [Mother Jones/Reuters]