Senate Intelligence Committee Bein' All Mature And Shit About Trump Russia Investigation, What's That About? 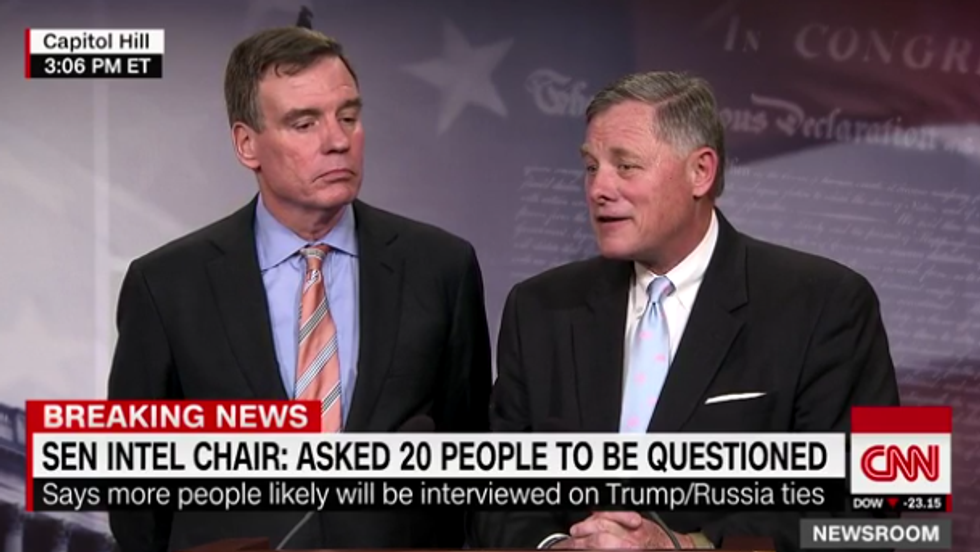 The adults in the room, maybe hopefully?

Thursday is an exciting day in Russo-American politics, as it is the first public hearing of the Senate Intelligence Committee on Russian meddling in the 2016 election, as well as Team Trump's alleged collusion with Russia. The two head honchos on the committee, Republican chair Richard Burr and Democratic vice chair Mark Warner, threw a presser Wednesday to tell everybody how excited they are to do a real investigation, and oh god, they were actually acting bipartisan and like they take this seriously, unlike House Intelligence Committee chair Devin Nunes, who was last seen through the fogged up windows of the Oval Office in a slinky red number doing "Happy Birthday Mr. President" a cappella, in heels, ALLEGEDLY.

Here, have some video of the good senators, being grown-ups:

[wonkbar]<a href="http://www.wonkette.com/614702/adam-schiff-would-like-intel-chair-devin-nunes-to-fuck-off-from-trump-investigation-please-and-fuck-you"></a>[/wonkbar]In that video, Senator Burr, who was a big Trumper but who seems to be taking his job seriously these days, says the investigation will go "wherever the intelligence leads us," and promises he will let everybody know exactly when people are scheduled to testify. As CNN notes, the committee has asked 20 separate people to testify, including Jared Kushner, Roger Stone, Paul Manafort and Carter Page, all of whom are GUILTY GUILTY GUILTY, unless it's proven that they're not, in which case they're not. (PFFFFFFFT.) But it's very good that they'll get to testify, since they were champing at the bit to do so last week (perhaps for a free ticket to the kind of prison where they have see-saws and literally every Berenstain Bears book you can think of), before Dipshit Devin canceled all the House's hearings, you know, to protect the integrity of the investigation.

According to NBC, "officials" say don't worry about those dick-noggins being granted immunity for their testimonies, because "officials" are "not inclined." If they refused to testify without immunity, they could be subpoenaed, something Senator Burr said in today's presser that they're totally willing to do.

[wonkbar]<a href="http://www.wonkette.com/614614/everybody-wants-to-testify-in-trump-russia-investigation-now-everybody-except-russian-spy-michael-flynn-that-is"></a>[/wonkbar]Absent from the list again? MICHAEL FLYNN, WHERE ARE YOUUUUUUU? Actually, though, Senator Burr said it's "safe to say" Flynn is one of the people they've spoken with, though he did not specifically say, "That boy's flippin' on tricks like nobody's business, LIKE WHOA," because why would a dignified senator even talk like that?

Ooh! Ooh! Ooh! Want to know a fun thing, though? NBC also says the committee MIGHT interview Christopher Steele, the guy who put together the funtimes series of memos that came to be known as the Steele Dossier AKA The Secret Of The Russian Pee Hookers: A Nancy Drew Mystery.

[wonkbar]<a href="http://www.wonkette.com/614470/the-five-best-times-devin-nunes-shit-the-bed-during-mondays-comey-hearings"></a>[/wonkbar]Senator Warner reiterated Wednesday that this investigation is the "most important thing [he's] ever taken on" in his entire political career, and it was weird, because Senator Burr watched and listened respectfully, like he actually cares about the work they're doing right now. Dumb Senate, being no fun! Is Richard Burr even going to try to make this about Hillary Clinton? We're beginning to question his dedication to Republican Sparkle Motion, we sure are.

Devin Nunes said in Politico today that it's the DEMOCRATS on the House Intelligence Committee who aren't taking this seriously, whereas he is taking it very seriously, by not sharing any of his secret "intelligence" with any of the members of his committee, because as everyone knows, Devin is a one-man intelligence agency unto himself, and the REAL investigation is not about Russia, but about licking Donald Trump on the bottom and investigating made up "wire tapps."

Yeah for real, but not in the literal sexual way, because nobody wants to bang a guy who looks like a slow-witted gopher wearing a monk's cloak.

is now! Go say stuff about each other about all of the things!

Wonkette pays for jokes like "slow-witted gopher wearing a monk's robe" with YOUR DOLLARS, so if we make you laugh, click below to give us love offerings!