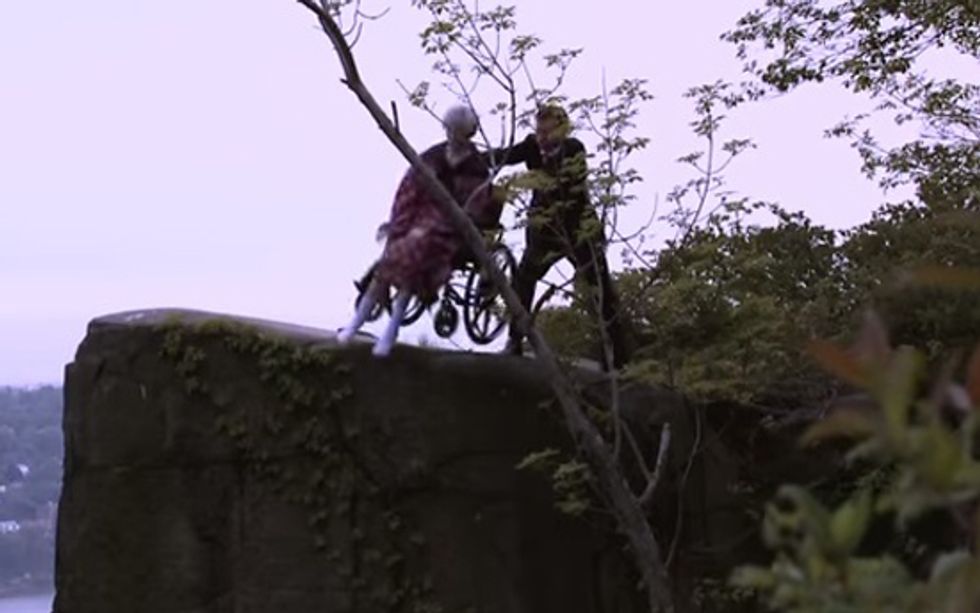 Off ya go, Meemaw!

On a party-line vote Thursday night, Senate Republicans passed a budget blueprint that sets the stage for a real budget that will blow up the deficit and make huge cuts to Medicare and Medicaid. And under the weirdass rules of Senate procedure, it also allows the Senate to pass huge tax cuts for the wealthy through the budget reconciliation process, meaning the tax cuts won't be subject to a Democratic filibuster. Now that this bit of procedural fuckery is out of the way, Republicans can get to the important work of making the obscenely rich even richer while boning the elderly and poor, exactly as the Founders wanted. The measure passed 51 to 49, with only one Republican voting against it: Rand Paul, who still clings to the sentimental Republican doctrine that deficits are always bad, even when Republicans are in power. He's sort of cute that way, the .5 percent of the time when he's not being a complete dick.

The budget outline includes $1 trillion in cuts to Medicare over 10 years, and $500 billion in cuts to Medicaid, because once the Trump tax cuts kick in, no one will be poor anymore, and the resulting economic growth will actually reverse Americans' aging processes. Senate Minority Leader Chuck Schumer seemed unaware of the flawless logic behind the plan:

This nasty and backwards budget green lights cuts to Medicare and Medicaid in order to give a tax break to big corporations and the wealthiest Americans. It shifts the burden from the wealthy and puts it squarely on the back of the middle class, and blows a hole in the deficit to boot [...] I think it will go down in history as one of the worst budgets Congress has ever passed.

The budget plan was supported by some Republicans who had warned it was a bad idea, but not a bad enough idea to actually vote against, of course:

“The budget’s a sham,” Sen. David Perdue (R-Ga.) said at a recent Koch-backed group’s gathering of wealthy donors in New York. “It has nothing to do with reality. ... It’s a tool to get to reconciliation.”

Since the bill isn't an actual budget, but rather a set of instructions for what the Senate can include in a real budget bill that would be passed by reconciliation, the details are all subject to change by the time the final legislation gets written -- probably in secret, to be sprung at the last minute to reduce troublesome debate and opposition from Democrats. It includes instructions for a tax cut package, although there again the exact details remain to be framed in legislative language.

The projected addition of $1.5 trillion to the deficit is no big, because Republicans truly believe in the Magic of Tax Cuts, which will create all the economic growth needed to offset the revenue lost by transferring even more wealth to the richest people in the country and to corporations. Please ignore all the economics experts who say that's bullshit, because they are unbelievers who do not have faith in tax cuts, and what have those economists ever done to make campaign contributions to Republicans, huh? The only reason tax cuts have never paid for themselves is obviously that they weren't deep enough, or weren't accompanied by radically scaling back government spending, which is always wasteful except when it's directed to military hardware.

Now hold this magic feather and you can fly by flapping your ears. Should come in handy when you're thrown off the cliff.

Yr Wonkette is supported by reader donations. CLICK HERE to help keep the servers running and the writers fed. Or fed up.