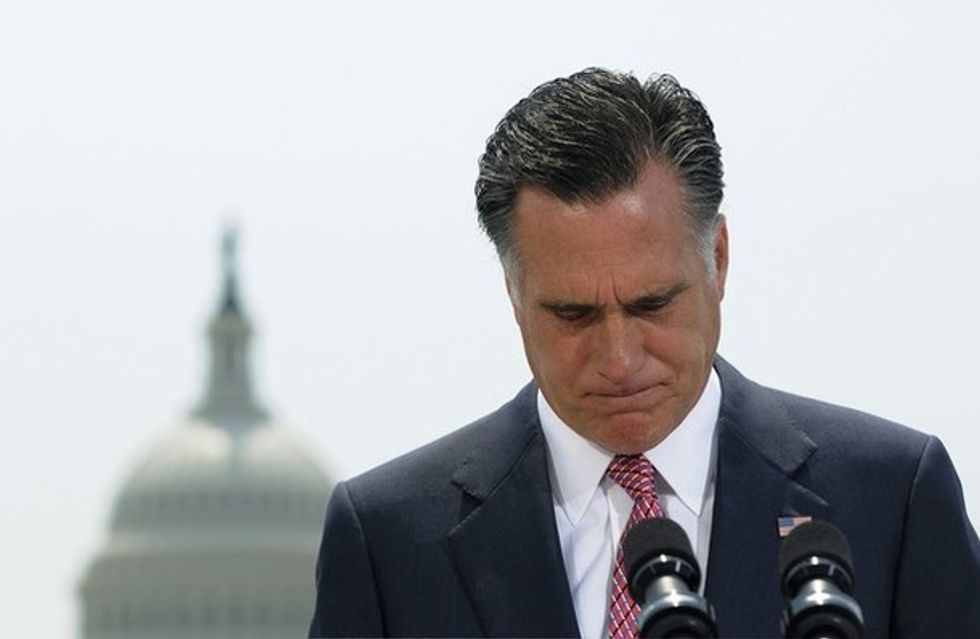 Poor Willard Mittens BainCapitalforth Offshorebankaccounts Romnington IV. He was hoping to waltz into the Senate seat being vacated by genuinely awful humanlike being Orrin Hatch after hatch announced his retirement this year, but for the former Massachusetts governor and Sad King Billionaire, things are never easy. At yesterday's Utah Republican Convention, not only couldn't Mitt get the 60 percent of delegates needed to avoid a primary, he couldn't even win the majority of delegates at all. Instead, in a state where being a conservative plutocrat who mocks the poor is merely the price of admission to the GOP, rightwing delegates managed to choose state Rep. Mike Kennedy over Romney with 51 percent of the votes. Romney got only 49 percent, although it would have been more allegorically pleasing if that had been 47 percent.

Mind you, being insufficiently far to the right isn't why Romney thinks he lost at the convention. Instead, he's fairly sure it's because Utah Rs don't like the fact that he made sure he got a place on the ballot by submitting 28,000 signatures on nominating petitions, which deeply annoyed the right. Because, you see, rightwing delegates want the party convention only to decide who counts as a Utah Republican, not some mere crowd of Utah voters. Seriously, sez the Salt Lake Tribune:

Conservatives have for several years fought in court and in the Legislature to overturn the state law allowing signature gathering, seeing it as weakening the power of the convention and its delegates.

“I know there were many people who were not enthusiastic about someone gathering signatures,” Romney said. But, pursuing the nomination through the convention and signature gathering “was right for me. I’m glad I did it that way.”

The convention had started out with 12 Republican candidates, and even though Kennedy got more convention delegate votes, Romney remains the presumed frontrunner, what with having all the money and name recognition, and also what with the Utah electorate managing to not actually be as far to the right as party apparatchiks. Still, the far right crazies in Utah have pulled this trick before: back in 2010, three-term US Senator Bob Bennett also got his ass handed to him at the state convention during the Great Teabagger Revolt of 2010. His sins had been voting for George Bush's bank bailout (a second great depression would have been more ideologically pure) and working with Democrat Ron Wyden on an Obamacare alternative that never went anywhere, but which (hide the children Martha!) included an individual mandate to buy insurance. Freakin' commie. Bennett couldn't even win a spot in the primary, and that's how we ended up with Mike Lee.

So hey, Mitt's practically cruising here. Besides, he has that reluctant glowing endorsement from Donald Trump, who Romney condemned as morally bankrupt until Trump became useful to him.

Also too, the Salt Lake Tribune reports, Kennedy got a little boost from some good old please-the-yokels theatrics:

Kennedy may have gathered some support between votes by voluntarily helping to sweep up confetti on the convention floor — to great applause by his supporters. Detractors, though, saw it as a stunt and GOP Chairman Rob Anderson suggested over the public address system that the work be left to the Maverik Center employees paid for the job.

Romney volunteers tried to respond with some yokel-pandering of their own, lobbing water bottles and packages of Twinkies to delegates waiting for the last vote. But it wasn't enough. Maybe Romney should have bet ten thousand bucks he'd prevail.

The GOP primary will be held June 26, and we're sure we can look forward to all sorts of embarrassments between now and then. During the convention, there was already talk of the primary becoming a David vs Goliath fight, which Romney tried to cut off with a not particularly good joke:

First, none of us is David. David was anointed of God. And secondly, I’m not Goliath. Washington, D.C., is the Goliath.

Yes, Mitt, run as the underdog. Good plan, you brave little crusader, you.

The really pathetic thing is that we're going to have to root for ol' Mitt in this stupid primary, since Mike Kennedy is objectively far worse, as you might expect. F'rinstance, see this 2014 Wonkette story on why Mike Kennedy, a medical doctor, opposes Obamacare. At a "healthcare reform" meeting, Kennedy replied to another doctor's anecdote about a man who had a rare adverse reaction to pain meds by explaining that's exactly why people shouldn't have too much access to health care:

Sometimes access to health care can actually be damaging and dangerous, and it’s a perspective for the [legislative] body to consider is that I’ve heard from National Institutes of Health and otherwise we’re killing up to a million, a million and a half people every year in our hospitals and it’s access to hospitals that’s killing those people.

We should add that the guy who'd had the bad reaction to medication had gone to the hospital after a car accident. There's a lesson there: If you're injured in a crash, stay away from the hospital, and by golly, Kennedy will help with that.

Utah Democrats hold their state convention next week, and the likely nominee, Salt Lake County Councilwoman Jenny Wilson, just might have a shot at running a decent campaign against either the feckless Romney or the soulless Kennedy. It's Utah, yes, and since Orrin Hatch was elected in 1976, the state hasn't sent a single Democrat to the US Senate. Which only means it's about damn time, huh? Wilson's campaign homepage is certainly designed to remind voters that the top Republican candidate isn't exactly a hometown Utah fella:

That's about as direct as you can get without shouting "Mitt's a carpetbagger," although honestly, that might not be a bad slogan, either. Like Mitt Romney, Wilson also worked to save the 2002 Winter Olympics, and unlike Mitt, she didn’t then go on and specialize in buying up failing companies, firing all their employees, and getting rich in the process, so that's definitely a factor in her favor.

Issues-wise, she's pushing her Real Reformer credentials, pointing out that she introduced an ethics reform plan on the county council that banned gifts from lobbyists and required greater transparency on donations. She's listed making DACA permanent as a top priority, which could actually sell well with Mormons, whose own history of persecution by majority religions has tended to make them far more immigrant-friendly than other conservatives. And of course she's against the Trump administration's downsizing of the Bears Ears and Grand Staircase-Escalante National Monuments, which should win her support from outdoorsy types. While early polls have her well behind Romney, the politics of 2018 is crazy enough that we wouldn't dream of counting Wilson out -- and Dems have to fight for every damn seat this year. Crom only knows the Kennedy-Romeny primary may generate plenty of material for Wilson to run against. How about you make a nice donation to Wilson's campaign, eh?

We love seeing Mitt Romney lose. Wouldn't it be grand to see him lose a Senate run, too? And to a Democratic lady, no less?

Yr Wonkette is supported by reader donations. Please click here to help us bring you all 33 US Senate races this year. And all the Romney mocking you can stand.