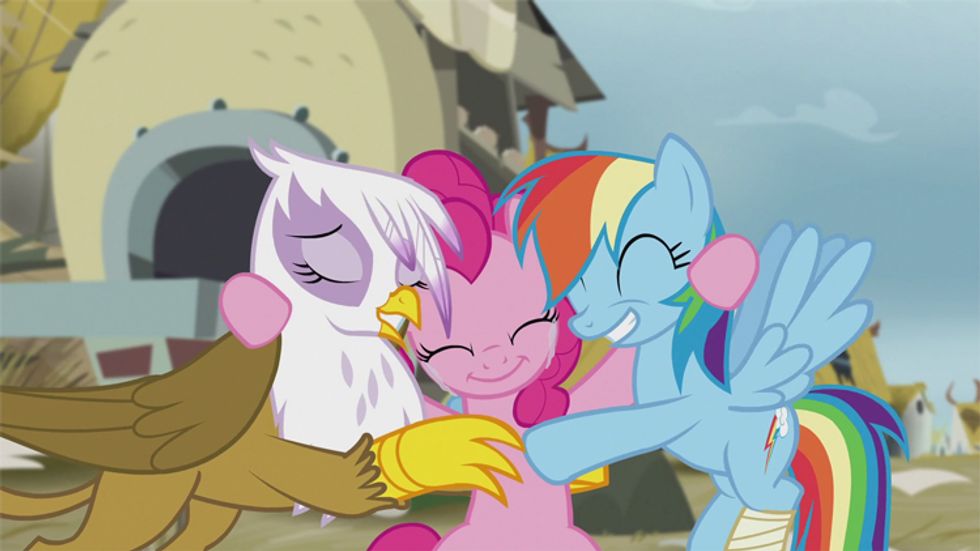 Of course, the griffins still want a Wall...

Last Friday, Donald Trump said he was going to halt payments of a key subsidy that makes the Affordable Care Act affordable: the "cost-sharing reductions" (CSRs) paid to insurance companies to offset out-of-pocket costs for low-income folks on individual and family plans purchased through the state and federal exchanges. There was no reason to do it other than to sabotage the ACA (an appeals court case was still pending on whether the subsidies were legal, so Trump's claim that they were clearly unconstitutional was bogus). The action has the potential to blow up the price of insurance in the exchanges, but since most people on ACA plans get subsidies, many of the increased costs would be eaten by the government, while those who don't get subsidies could be priced out of coverage. As Vox's Sarah Kliff said after Trump's announcement, Trump enacted "a policy where the government spends billions more to insure fewer people."

But hark! There is a ray of hope shining from the Senate! Tennessee Republican Lamar Alexander and Washington Democrat Patty Murray announced this afternoon they've reached an agreement to fund the CSR payments, at least in the short term. And Even Donald Trump has made approving noises about it. The agreement, says the Washington Post,

would provide states with greater flexibility under the Affordable Care Act in exchange for authorizing cost-sharing reduction payments known as CSRs for two years. Those payments help offset deductibles and other out-of-pocket costs for low-income consumers who obtain insurance under the ACA.

“Yes, we have been involved and this is a short-term deal because we think ultimately block grants going to the states is going to be the answer,” said Trump, referring to a Republican push to block grant health-care funding individually to states.

So yes, that's qualified support, because Trump still thinks the failed Graham-Cassidy plan is the shit, but what Trump thinks at any given moment changes.

Of course, it's not clear yet whether the Alexander-Murray plan has a chance of actually being introduced in the Senate, because Mitch McConnell is a chelonian asshole. The most McConnell would say, shortly after the deal was announced, was that "We haven’t had a chance to think about the way forward yet," which translates to "We need to see whether we can leverage this into a huge tax cut for the wealthy," because that is what every other word out of McConnell's turtlebeak means.

The proposal would ensure funding of CSRs for two years, but would also allow states to

make changes to insurance offerings as long as the plans had “comparable affordability,” which is a slightly looser definition than the existing one.

The proposal would also allow insurers to offer catastrophic insurance plans to consumers aged 30 and older on ACA exchanges, while maintaining a single risk pool.

So some slightly cheaper, junkier insurance for the healthy youngs, but they'd still be paying into the same insurance pool as everyone else. Looks like it might not entirely suck? Unlike the Senate's attempts to murder the ACA, the compromise wouldn't allow states to opt out of essential health benefits or protections for patients with preexisting conditions.

No telling whether enough Republicans will stick their necks out to actually fix part of the ACA, even for a limited time, because they may fear primary challenges from rightwing loonies next year. This would be an excellent time for Republican senators to hear from their constituents that this is a fine chance for Congress to finally do something good for a change, don't you think? Give 'em a call and promise a group hug! Or threaten one, if that works.

Yr Wonkette is supported by reader donations. Please click here to give us money, and JOIN US FOR A DRINKY THING tonight if you're in the Boise area!