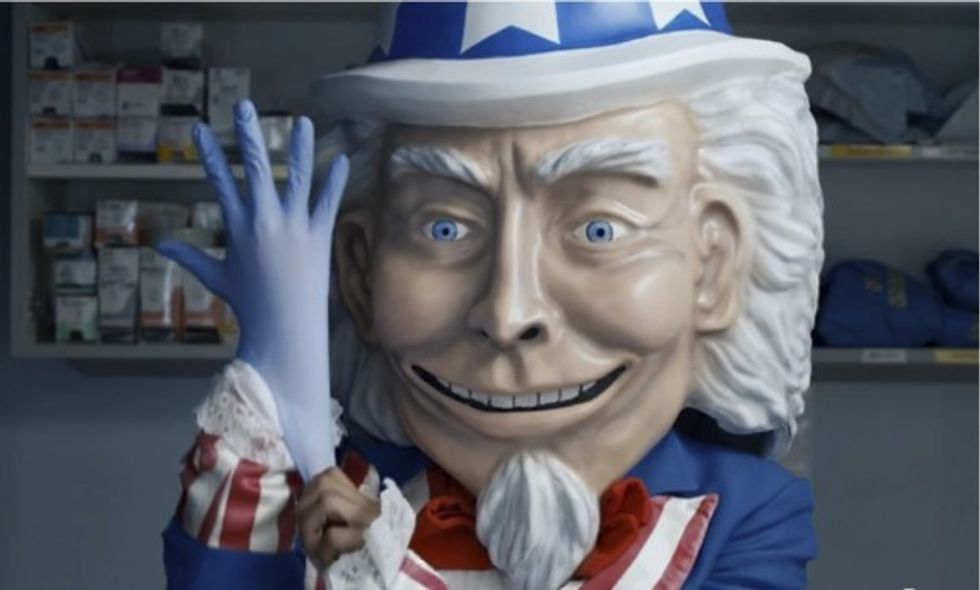 While everyone's watching the fallout from James Comey's testimony about Donald Trump trying to put the kibosh on the Michael Flynn investigation, Senate Republicans keep toiling away in the dark on their version of killing Obamacare, which they'll either unveil when they're good and ready to ram a vote through before anyone notices, or maybe give up on, depending on whom you ask. We'd like to hope there's no way they'll come up with anything draconian enough to please Rand Paul and Ted Cruz while being just moderately cruel enough to keep Susan Collins or Rob Portman on board. The most extreme rightwing senators are either being shut out or getting exactly what they want, again depending on the anonymous leaks coming out of the negotiations, but the one thing you can be sure of is that even a "moderate" Republican healthcare bill is going to suck -- the kinder and gentler option under discussion would generously roll back the Medicaid expansion in seven years instead of three, for instance. It's nice, though, that they'll let poor sick people have a choice between dying slowly or all at once, because we have the greatest health care system in the world.

Senate Majority Leader Mitch McConnell is still shooting for a vote before the July 4 recess, just as long as whatever the Senate comes up with is terrible and can be voted on with a minimum of public attention. For some reason, Senate Democrats like Missouri Senator Claire McCaskill seem not to understand the urgency of quickly tossing together a law that affects a sixth of the economy and could leave tens of millions without health insurance. That's what makes her such an obstructionist. Orrin Hatch just doesn't see why we need some dumb "hearings" on all that:

"Will there be a hearing on the health care proposal?" Senator @clairecmc asked today in the Finance Cmte. You should watch: #Trumpcarepic.twitter.com/rmKB0rGnTM

It almost seems like the confusion about what may be in the bill is strategic, too. CNN reports that conservatives are ready to bail if the bill doesn't follow the House's example and gut protections for people with preexisting conditions, but MSNBC says it's likely the Senate bill will look more like the terrible House version than that.

Whatever ends up coming out of the Senate, it's not going to be good -- remember, the "kinder" version of the House bill, which kept protections for preexisting conditions and essential health benefits, still would have left 24 million Americans without insurance. The fight in the Senate is over how cruel the bill can be while still keeping some moderate votes, and The Week reminds us that "moderates" have tended to fold in the face of rightwing demands for bigger cuts, put in place faster, for freedom.

The one bit of potentially good news is that if just three Republicans refuse to support whatever version of Death Panels the Senate bill turns out to include, the bill will fail. In order to go through with a simple majority and escape the chance of a filibuster, the Senate bill would have to meet the requirements of the rules for reconciliation, which means it would have to be scored by the Congressional Budget Office -- they can't just ram it through like the House did, without knowing how much the bill costs or how many people would lose coverage. And the more people lose coverage, the more "moderates" the bill may lose, at least in theory. It's hard to say just how spineless they'll be on that.

The one thing that's certain: Assuming the Rs bend enough arms to get a bill in place, it'll be awful, and we all need to be making those calls to our senators, yet again, to let them know we haven't stopped paying attention -- especially senators who are up for reelection in 2018. Republican "moderates" can't be relied on to please make this shit sandwich only 80% as shitty as the House version. It needs to be flushed.

Yr Wonkette is supported by readers like you, only you're clearly our favorite. Please return the favor by clicking the "Donate" linky below!