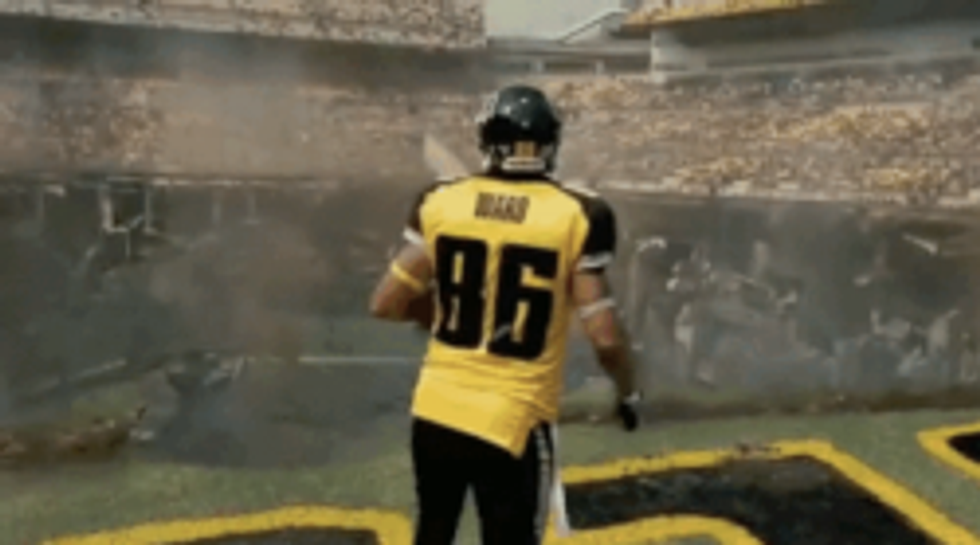 NEW YORK—Good morning, Internet! Or not, actually, because we have to talk about the payroll tax cut again—and we're getting so tired of talking about the payroll tax cut. So very tired.But here we are! Because John Boehner, a man widely heralded for his opposition to the punting of things and the kicking of metaphorical cans down proverbial roads decided yesterday to kick the can down the bicameral road and punt on a House vote scheduled for late last night on the Senate's draft of the bill. The delay was necessary because whips were still busy rounding up votes on a procedural maneuver to send the bill back to a conference committee (a fun little parliamentary shimmy that would allow caucus members to reject the bill without casting an actual 'no' vote).

The obvious bad news here: we're still going to be talking about this tomorrow. (And probably the next day, too.)

But in any event, we keep hearing that House Republican opposition to the bill is largely due to how it will "create uncertainty" among job creators, which has left us scratching our heads here for some time now. But an important talking point emerged in today's Washington Post coverage that pretty brilliantly illustrates just how deep the vast yawning depths of the GOP's cynicism here really are: James Renacci of Ohio said that the very least the Senate could have done was push for a three-month window so as to align with company quarterly filings, which is hilarious! Because nothing in this bill affects the employer contribution on the payroll tax in any way whatsoever. But prior versions of the bill did, though! Remember that? Two weeks ago Senate Democrats were forced to drop a provision in their bill that would have actually lowered the employer contribution because Republicans refused to pay for it with a surtax on millionaires, because of something something (you guessed it...) creating uncertainty for job creators! Current drafts of the bill leave the employer contribution completely unchanged, meaning Renacci is either a) ignorant, b) a hack, c) unfit to hold elected office, d) [we don't actually have a 'd', we're just trying to get to 'e'], or e) all of the above.

So ok, let's just quickly recap where we are: a month ago, the never-met-a-tax-cut-that-had-to-be-paid-for Republican Party suddenly met a tax cut that had to be paid for, being as it was a tax cut for not-rich people as opposed to a tax cut for—ahem—"job creators." After painting themselves into a corner, Senate Republicans not only refused to withdraw their filibuster threat until Democrats agreed to withdraw any provisions that would have made good budgetary sense by raising marginal tax rates on incomes in excess of $1 million, but also refused to sign on to a bill extending the tax cut for more than two months. This then opened the door for House Republicans to swoop in and play the role of champions of the middle class and these "job creators" and then trot out this line about how the American people deserve the tax cut for the whole year instead of just two months.

(Which they do, and actually would have got were it not for Senate Republicans.)

But moving on: pollsters gonna poll! Newt Gingrich and Mitt Romney are now running neck-and-neck in the latest utterly meaningless nationwide poll of primary preferences, while voters, now getting a little bit more familiar with the thoroughly unimpressive cast of characters populating the GOP field, are giving Obama his highest approval ratings since the summer.

Speaking of polls, now that Ron Paul is on top of them in Iowa—and another (PDF) was just released giving him a six-point advantage over Romney—people are finally starting to pay attention to the fact that there's a pretty good chance he's a horrible racist! We can't help but roll our eyes a little bit when people first start to wonder if there's maybe a little bit of kinship between libertarianism and horrible, right wing extremists and white supremacist groups—though in all fairness to the good people at the Times, not everyone's been reading Orcinus for as long as we have.

Sarah Palin, meanwhile, took a break from busily trying to get her Alaskan reality show optioned for a second season to get back to the very profitable business of maybe-but-probably-not running for president. And pundits across the country are falling for it! (Again.) Or worse than that, really, since they're not so much falling for it as they are generating the environment in which she can remain even remotely relevant as a potential candidate in the first place by going so far as to even ask her the thoroughly ridiculous question of whether she might at this late date might try to make a run for the White House.

And we leave you with this: Apple scored a win yesterday in its patent battle with HTC after the US International Trade Commission concurred that the Android handset developer had violated Apple patents by building hardware that responded to users tapping on underlined phrases in the interface by opening the application the user would have expected to open with such input. As a precautionary measure, therefore, we strongly advise all our readers to avoid clicking any hyperlinks they may come across on the internet today unless doing so on an Apple device.