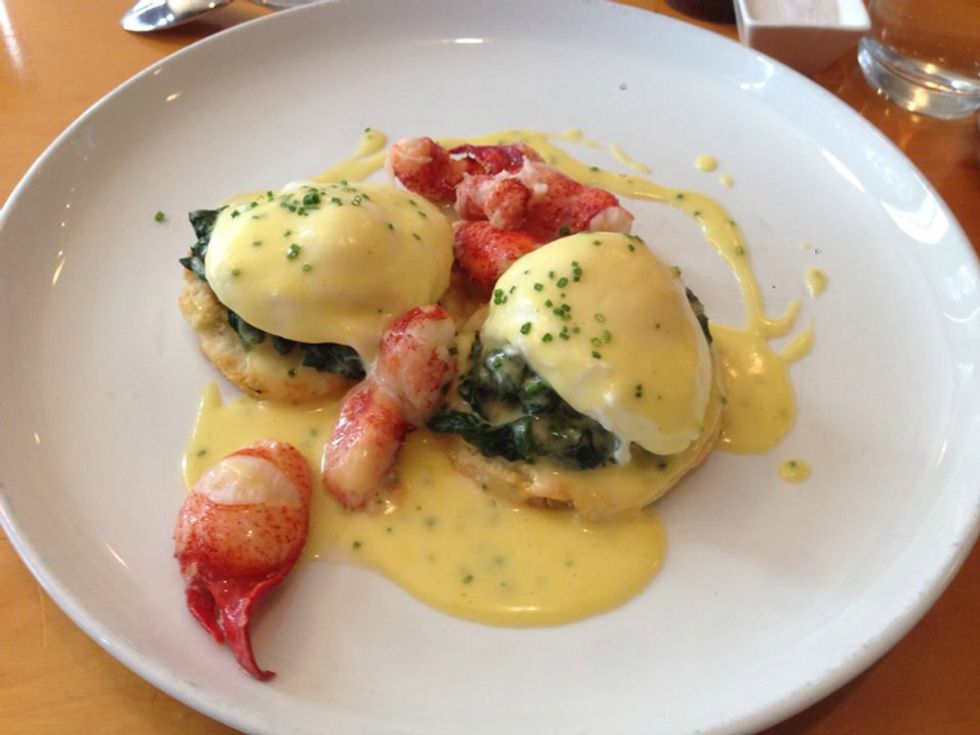 The restaurant may have terrible ideas about the minimum wage, but damned if that doesn't look delicious.

Oh hey, it's a Maine story (about the minimum wage, no less) that doesn't directly involve Gov. Paul LePage!

Five servers at a restaurant in Portland called Five Fifty-Five have quit in one hell of a mic drop, giving their notice in a Portland Press Herald op-ed. The inciting incident was when their boss, Michelle Corry, wrote an op-ed that claimed to speak for her employees about the citizen-initiated ballot referendum in the state to both increase the minimum wage to $12 and eliminate the tip credit (also known as the "sub-minimum wage"). It's the latter point that had Corry in such a huff.

Wait, Whosa What Now? What The Hell Is This Gol-Durned "Tip Credit" Thingie?!

Yeah, we should probably explain just what the hell this fancy-shmancy "tip credit" is. Everywhere but seven states in America, employers are allowed to pay tipped employees like servers and bartenders way less than the state minimum wage. The amount varies by state, but in most of them it's less than half the minimum -- the lowest, in 18 states, is $2.13/hour (in which case your entire paycheck just goes to taxes and will actually say "THIS IS NOT A CHECK," probably because "LOL YOU POOR MOTHERFUCKER" is unbecoming even for the IRS).

States are allowed to do this because tips are supposed to make up the difference. If servers make less than the minimum even after tips, theoretically their employer has to pay them the difference between their take and the minimum. In practice, HAHAHAHAHAHA fuck you, good luck ever getting your employer to pay that, especially at small businesses like Five Fifty-Five, which are notorious for finding ways to dick over their employees. If this sounds kind of like employers really just want to keep paying their employees slave wages, congratulations! You are good at reading.

Opponents of eliminating the tip credit say that doing so would bring about a restaurant industry apocalypse and there would be much rending of garments and gnashing of teeth. Restaurant owners in states like California, Washington, Oregon, and Minnesota, which pay their servers a guaranteed living wage and, at last check, had not devolved into a Road Warrior-esque hellscape, say "Um, not so much?"

So What The Hell Is Going On In This Maine Restaurant?

Right, back to Maine and Michelle Corry's op-ed. So, Corry argued strongly for a counter-proposal to the ballot initiative that would raise the minimum wage to only $10 and keep the tip credit intact. Since at last blush 75 percent of the state is in favor of raising the minimum wage, anti-minimum wage douchebuckets (even LePage -- dammit, he showed up in this post despite our best efforts) know they're going to have to compromise at least a little bit here, and the counter-proposal is that compromise. But in arguing for it, Corry tried to speak for those it would directly affect:

Ask any tipped employee at a restaurant near you if they would prefer to make a set wage or hustle and create their own destiny. The employees at my restaurant would always choose their own initiative.

Putting words in her servers' mouths turned out to be a less-than-ideal move on her part.

We're Guessing Some Of Her Servers Were Displeased With This

You guess correctly! In the aforementioned op-ed dated Tuesday, March 29, Heather McIntosh and five other at-least-publicly unnamed employees pledged to put in their notice. They especially want people to know that Corry's attempt to use them as puppets isn't the first of her shenanigans:

There have been many issues at the restaurant, from capricious schedule changes to questionable practices on wages and tips. This latest insult of our boss falsely claiming to speak publicly on our behalf on an issue we care deeply about is just the final straw. We are submitting our notice and will be leaving her employment.

Translation: whatever the incredibly white Maine equivalent is of "oh HELL naw."

McIntosh also highlights the inherent issue with the tipped sub-minimum -- that is, the income crapshoot that goes along with it.

Right now, even working at a Portland-based fine-dining establishment like Five Fifty-Five, our schedules and incomes are inconsistent week to week and season to season. We never know if we’ll make enough to pay the rent or pay for child care.

For many restaurant workers, it’s much worse. The average wage for a server in Maine, including tips, is just $8.72 an hour. Tipped workers are three times more likely to live in poverty than other workers and twice as likely to need to access food stamps.

That's as succinct a summary as you'll find for why a significant percentage of servers would rather have an actual living wage than simply survive on the inherent volatility of tips. And we have to say, major props for being willing to walk the walk and leave your job on principal for something like this.

In conclusion, dear Maine: raise the damn minimum wage, tie it to inflation, and get rid of the damned sub-minimum wage, the end.