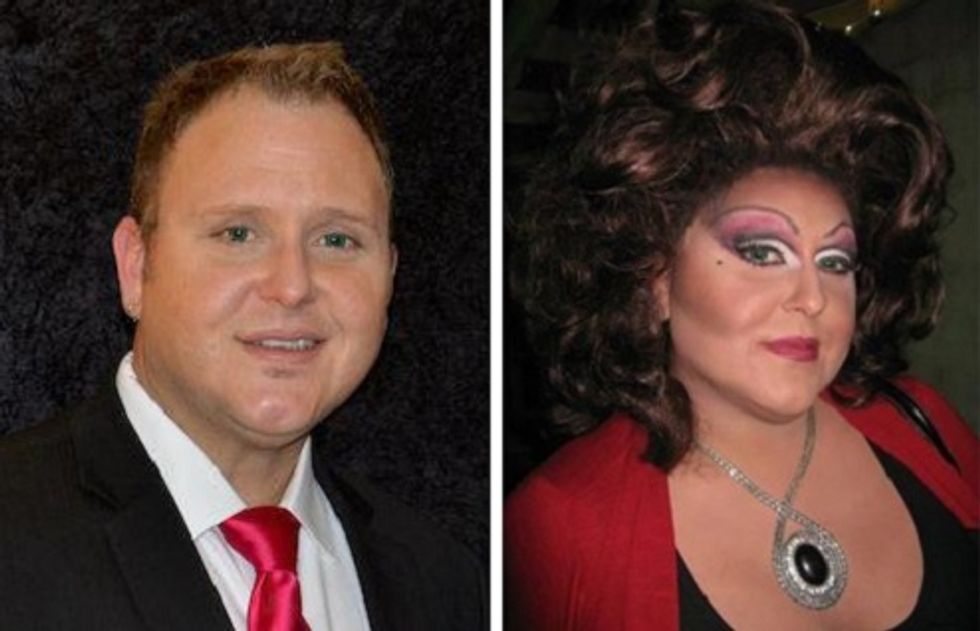 Updated: see end of post Things may get a little awkward for North Carolina state Senate candidate Steve Wiles (R-Denial), who's one of three candidates in tomorrow's primary for his district. See, he's been touting his support for the state's ban on same-sex marriage, but then over the weekend, the manager of a gay nightclub in Winston-Salem-Virginia Slims outed Mr. Wiles as a former drag queen who performed under the name "Mona Sinclair," which doesn't strike us as a particularly good drag name, but maybe he was just as inept as a drag queen as he is as a rightwing candidate running on an anti-gay platform.

Randy Duggins, co-owner of the now-defunct club (which is also a terrible name for a club), said that when Wiles worked there, he was in his early 20s and very definitely gay. Another former employee, Gray Tomlinson, also said that Wiles was Mona Sinclair.

And of course, Wiles has been all over the place with his explanations about his walks on the wild side, teetering around like someone no longer accustomed to wearing high heels. He initially denied that he'd ever been a drag queen, then said that he has "apologized to the people who matter most to me for the things I did when I was young" without specifying what those things were (we're guessing he wrote Harry Potter fanfic), and later confirming to Business Insider that he had worked in drag, but explaining that he doesn't think that being against marriage equality makes him anti-gay. "I don't really understand how you can separate the fact that marriage is a religious institution," he clarified, apparently not noticing all those civil marriages the state performs.

As to whether he considers himself an "ex-gay" person, Wiles replied, "No, no, I really won't make any comments on that." Well, OK then. No need to talk about whether there's any hypocrisy involved here, after all, since it's apparently possible to be in favor of discrimination without being anti-gay, and isn't the real issue getting Obama to come clean about Benghazi, maybe? In any case, the whole drag queen thing was just a job, and one that he grew out of:

"I think that everyone has their own choices to make and I'm fine with everyone making their own. For me, from a religious standpoint, just for my life, for me, it just was not something that I wanted to continue," Wiles said of his drag performances. "Of course it was an embarrassment, but you know, you move on. You live life, and you change, and you make yourself what you want yourself to be. And that's where I am now."

Yes. You are a former drag queen who, for electoral convenience, is happy to throw gay people's rights down the tubes. Apart from the reek of hypocrisy, you're every bit the equal of any 100% straight person who favors marriage discrimination. We'll definitely give you that much. Good luck in the primary tomorrow!

Update/Correction:We dun goofed -- the drag performer pictured in the photo that we originally ran was not Steve Wiles; it was another person who performs as "Bobbi Lee SinClaire," who is unrelated and is also not a bigot! We regret the error, and have added a photo of Wiles as "Mona Sinclair" that we are told is actually the right person.

Follow Doktor Zoom on Twitter. He's not the world's most passionate guy, but he's been known to sing "Doo do doo do doo do do doo..."