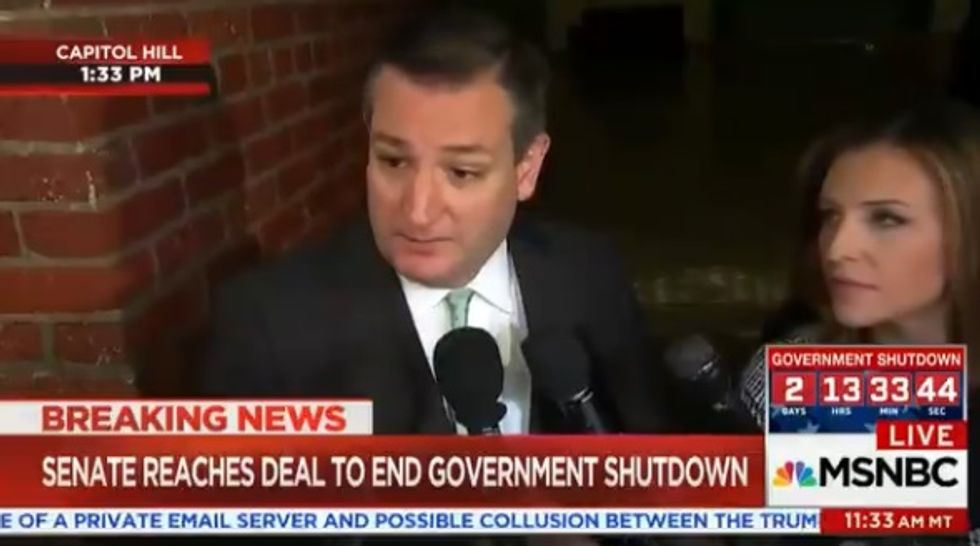 MSNBC Reporter Takes Down Ted Cruz On National TV For Lying About His Government Shutdown https://t.co/2bpMmfSe0dpic.twitter.com/m1TgcrWo81

As we move toward House and Senate votes to reopen the government after its weekend disco nap, it's good to know that the architect of the 2013 government shutdown to defund Obamacare, Texas Senator and then-de facto Speaker of the House Ted Cruz, has decided he had nothing to do with that earlier government shutdown, because duh, of course he couldn't have. Democrats are always to blame for government shutdowns, didn't you know that?

As Cruz explained to a press gaggle today, he had never even once voted against funding the government in 2013, depending on what the meaning of "voted against" is.

Oh, so very close! Except totally not really! Ted Cruz was instrumental in convincing the House Freedom Caucus to include a poison pill in its version of a continuing resolution in 2013, which would have defunded the Affordable Care Act. True, he didn't vote for that bill, because he was in the Senate, but it was his baby. (He did, however, hijack the Senate for 21 hours so he could read Green Eggs And Ham, that memorable Dr. Seuss fable about never trying something you don't think you'll like, and then proclaiming victory.) Once the CR got to the Senate, then still controlled by Democrats, they removed the language killing Obamacare, and Cruz was among the Republicans who voted against removing those amendments -- in effect, voting for a shutdown, though on the losing side.

The Senate passed the CR that retained Obamacare funding and sent it back to the House, which kept passing successive versions with even more anti-ACA amendments. The Senate refused to vote on any of them (and even if they had approved it, Barack Obama would have vetoed them), and so the government shut down.

MSNBC's Kasie Hunt called out Cruz for being a lying liar: "Sir, you stood in the way of that [...] That's simply not the case."

Cruz wasn't about to let some crazy media lady lie about the spin he wanted to give his repeated efforts to reopen the government with Obamacare defunded:

Still confused? (Your editrix is! She is just going to assume the preceding all made sense.) Fortunately, Fox News factchecker Shep Smith closed the historical debate about Cruz's role in the 2013 shutdown with his most effective weapon: Withering sarcasm.

On Fox today, Smith played The One Honest Man On Fox again, mocking Cruz's claim from earlier in the day:

He's very much against shutdowns.I heard him say it today so I know it’s true. Green Eggs and Ham.

There you go with your non-alternative facts again, Shep. You're walking a dangerous road, man.

And now it is your OPEN THREAD!

Yr Wonkette is supported by reader donations. Please click here to keep us funded until we figure out all the problems in the world. Maybe longer.