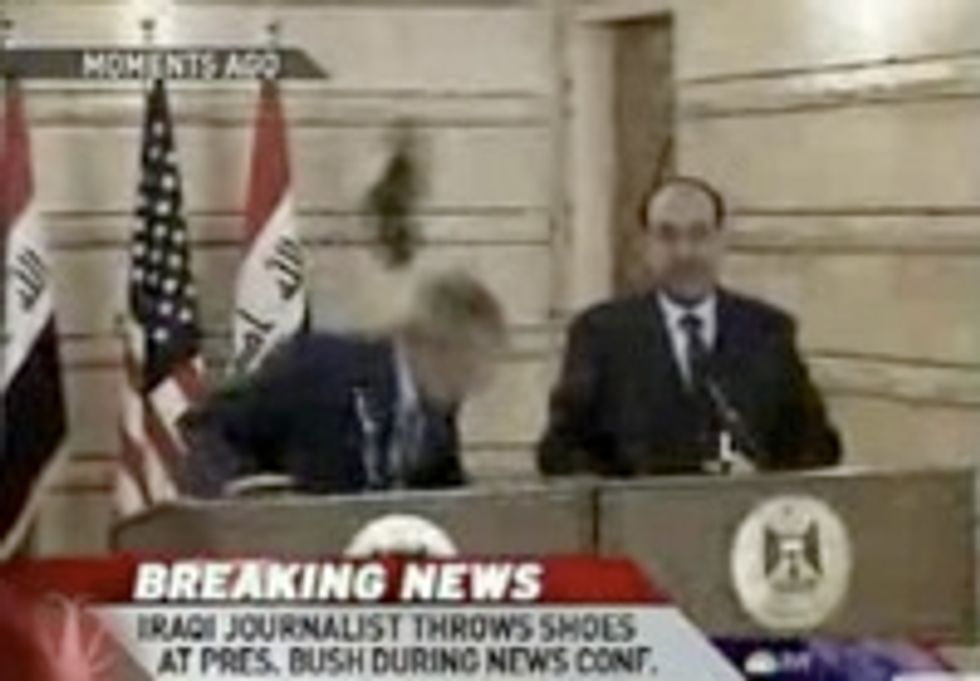 A very brave man once stood up in a press conference and took off his shoes one at a time and threw them at the President of America, who nimbly ducked because he still has the reflexes of a regular cocaine user. This shoe-throwing fellow was promptly taken to an Iraqi jail, where he was probably beaten, and now he will be tried for, let's see, "aggression against a foreign head of state" on the very last day of the year. Translation: Muntadar al-Zaidi will be locked in a coffin of live rats and shipped to Dick Cheney's basement at the Naval Observatory, where the Vice President will spend his New Year's Eve skinning and stuffing the hapless Iraqi, who will become the latest addition to his growing collection of large mammal specimens.

Muntadar al-Zaidi faces five to 15 years in prison for chucking a couple of shoes at George W. Bush. He will probably be tried on a lesser charge of "attempted aggression," because, who knows, maybe the straight-up aggression charge only applies if the shoe-hurler doesn't miss? Or if you're throwing something more menacing than a shoe? The point is, Muntadar al-Zaidi owes George W. Bush a debt of gratitude for dodging a projectile so well, or else our brave journalist friend would probably already have been tortured to death by Blackwater goons.