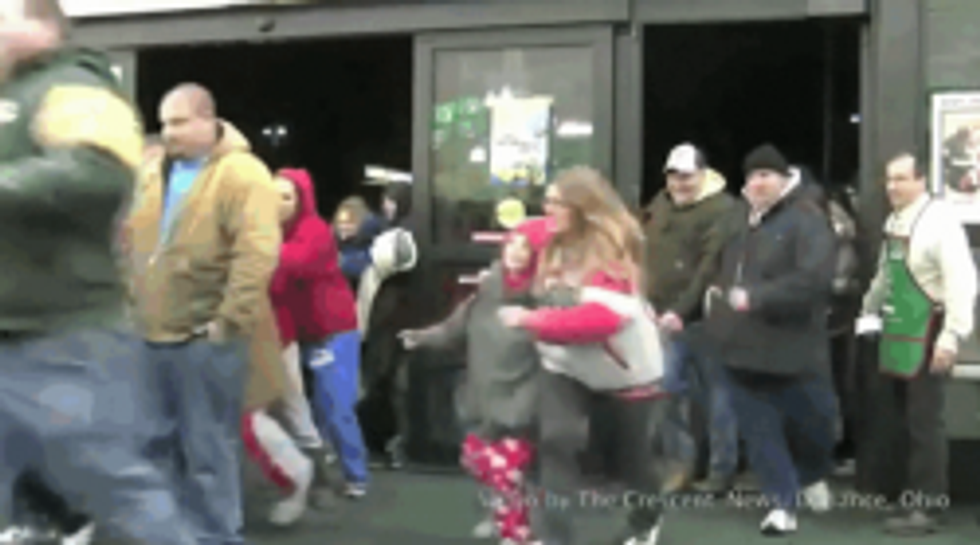 NEW YORK—The internet is abuzz this morning with news out of Los Angeles that one thrifty customer at an area Wal-Mart resorted to pepper spraying twenty other shoppers in a frantic hunt for $10 Wii games and $29 tricycles. The assailant remains on the loose, but theLA Times scored some choice quotes from L.A. Fire Captain James Carson, who said the pepper spray was a tactic meant to "gain preferred access to a variety of locations in the store," which, ok! Mr. Carson clarified by saying "she was competitive shopping," which sounds to us like a great TV pitch, sort of like C.O.P.S meets Supermarket Sweep.

In other pepper spray news, Megyn Kelly is defending her comments (naturally!) as having been taken out of context. This predictable walk-back is too little too late for Ms. Kelly, however, since she's already suffered one of the most glorious memeings in recent internet memory.

Paul Krugman invites the Occupy movement to extend its umbrella another ninety basis points, devoting his column today to the disproportionate rise in salary of the top 400 households compared to the 99.9%. We're just delighted to see the shrill one hammering away at the dramatic decline in capital gains tax rates over the last three decades, but we'd be remiss if we didn't tip our hats to Robert Lenzner for being all over this one five days ago in Forbes

Ezra Klein, who posted a great piece earlier in the week on how the supercommittee failure is especially bad news for the GOP, shares this handy chart today comparing taxes versus cuts in the dual trigger plan.

We hope you're sitting down for this one, because the eye-rolling you're about to endure could prove vertiginous: it's the return of the centrist third party insurgency! The Washington Post is on it, Sandy Levinson joins in the fun, and now all of a sudden Evan Bayh is somehow back in the news and would you look at this even Ed Koch wants Bloomberg to run! No, we're sorry, we just have absolutely no patience for this stuff. [READ MORE AT GIFZETTE]