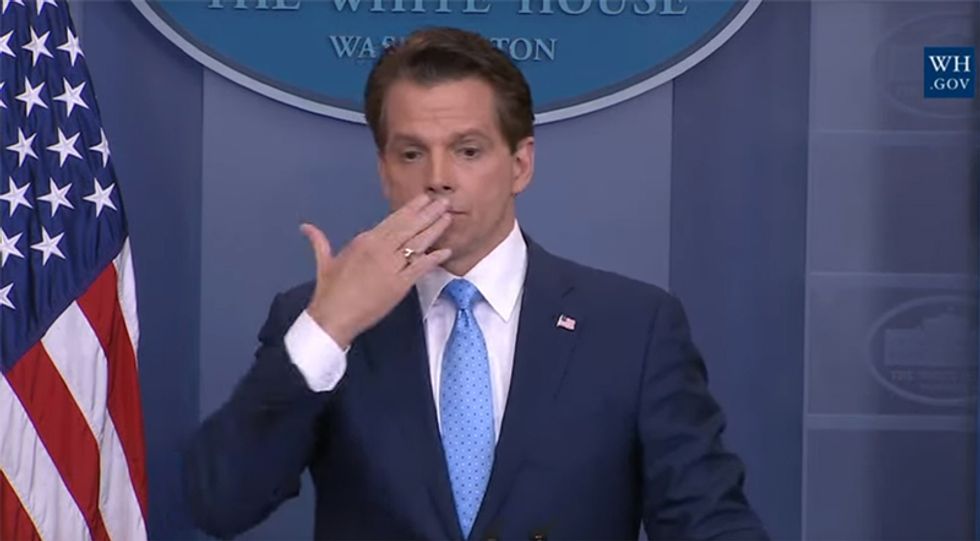 Sure, Anthony Scaramucci's a fuckwit, but we thought he was our kind of fuckwit. You know, the kind that gets loaded and says, "I’m not Steve Bannon, I’m not trying to suck my own cock!" He's that asshole you go to lunch with once a year to remind yourself to be grateful for your own wonderful husband. Just never let him pick up the tab, though, or he'll start thinking it's a date! You know, a run-of-the-mill jerk. After he spilled the beans to Ryan Lizza at The New Yorker and got fired from his sweet White House gig, we thought, "Well, maybe that guy will land on his feet. He can be like a Mo Rocca of the right."

Did you just give a reacharound to every rightwing Holocaust-denying loon? How fucking desperate are you for retweets, Ant'nee?

Now don't get your yarmulke in a bunch, Wonkers, because Mooch's social media manager Lance Laifer has a perfectly logical explanation. This isn't a dogwhistle to the Nazi nutjobs! How could you think such a thing! It's a history lesson. Because The Mooch is service-y like that.

You see, he saw this Anne Frank costume online:

And he felt some feelings.

If he was being honest, he was actually Other (write-in) with no emojis at all!

So he hatched a plan to raise awareness by putting historical facts up for a vote. AS ONE DOES. Lance was definitely going to drop some knowledge on that 21% who said less than 1 million Jews were killed during the Holocaust. He had the link for Deborah Lipstadt's TED talk on Holocaust denial on speed dial, yo! But then the SJWs got all PC on him, and he had to take it down. Suck it, snowflakes!

Maybe tomorrow you'll get over your PMS and appreciate the awesome quizzes Lance has prepared for you.

ALLEGEDLY on that last one. We do not know if Anthony Scaramucci was on a bender.  Also he is not going to fire that guy Lance Laifer, because oh hey look, Scaramucci, a MEDIA PROFESSIONAL, has finally responded after six hours. He's going with the Holocaust education promotion angle too:

He saw that Anne Frank costume and got all verklempt. Some of his BEST FRIENDS are Hebrew Americans! So, we're cool now, right?

Congratulations, Lance! Looks like you get to keep your very good "job" after all!

Donate to Wonkette, do it right now!