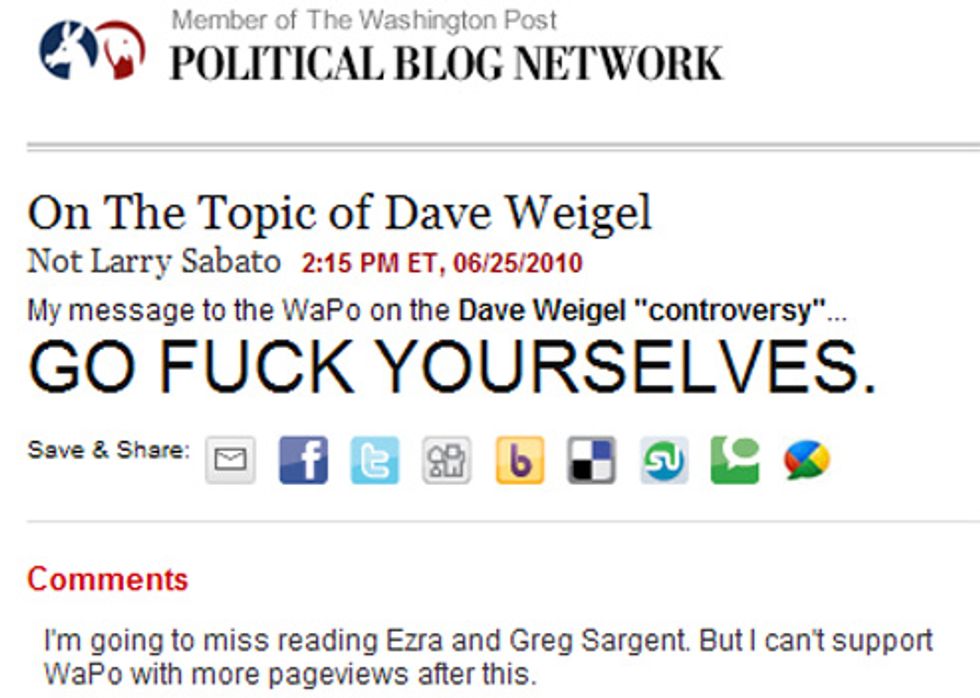 National media embarrassment the Washington Post acted exactly like everybody figured the Washington Post would act in the wake of some pointless e-mail episode involving snide remarks by Dave Weigel about the teabaggers he covers and their main newspaper, Matt Drudge's 1996 link list: the Washington Postpushed Weigel out of his job. Luckily, the "WaPo" (please everybody stop doing that, by the way) has an unpaid slave army of free-content bloggers, like this one, "Not Larry Sabato," which is a good & serious Washington Post professional byline. It only took the paid taskmasters at the "WaPo" (sorry) about an hour to kill this amusing blog post, by which time we had the screenshot you see here.

Anyway, all this nonsense reminds us once again just how terrible this paper is, the Washington Post. Its news coverage is utterly without distinction, and its "name" columnists are some of the most loathsome hacks in the entire business.

What the paper is best known for, in the 21st Century, is its constant stupid internal scandals: selling lobbyist access to the paper's political editors, filling precious column inches with the Marie Antoinette ravings of demented old socialites like Sally Quinn, hassling unpaid bloggers to cough up free content for this bloated corporate behemoth that makes its riches off the insecurities of college-bound children and their fretful parents, and of course the bending over for any domestic or international horror committed by the United States government or military, as long as there's some Power to worship and genuflect before.

A remarkable thing about the Post is its complete lack of defenders. Nobody has anything good to say about it. And even after decades of slavish devotion to whatever fringe-right insanity at home or abroad, the Post is as loathed by conservatives as it is by liberals, moderates and basically anyone with an iota of editorial taste. It's a bad local paper and a worse national paper.

Honestly, the only noble response to this latest stupid faux outrage is for all the management, board members and op-ed idiots to gather in the basement, watch a few minutes of All the President's Men so everybody can feel all puffed up and proud about something that happened four decades ago, and then have G. Gordon Liddy pass around revolvers and boxes of bullets. Meet death with some class, some guts -- the stuff you people never had in life.

Or, you know, just get closed down like Newsweek. That's fine, too. (And a helluva lot more likely.)