Sleazy Insurance Companies Want To Make You Get Insurance On Your Mobility Scooter. Thanks Obama! 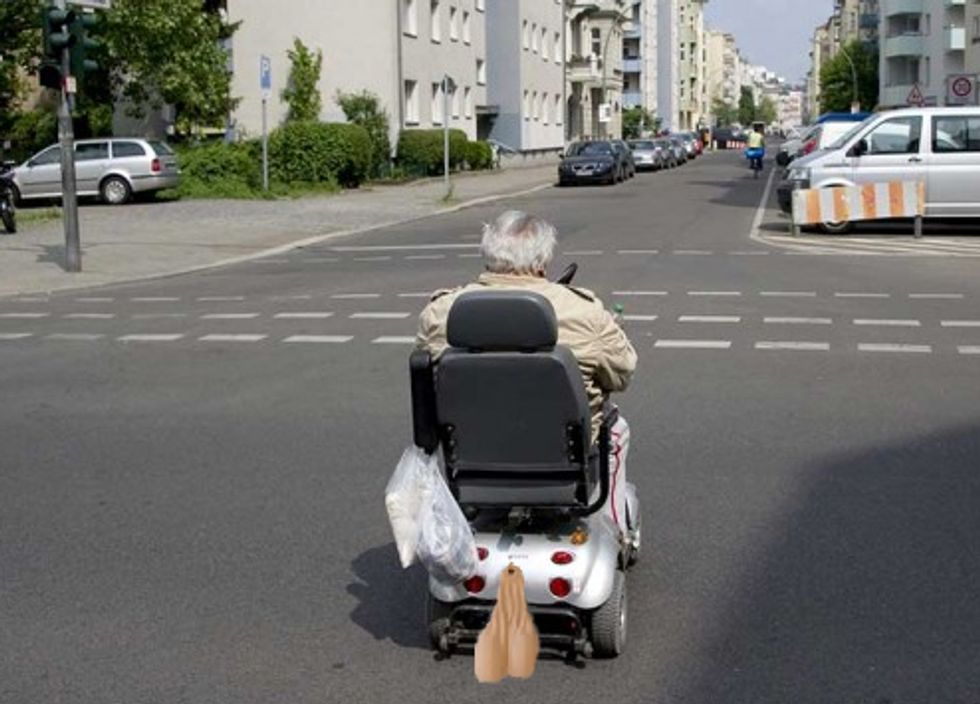 From our "You've got to be effing kidding me" stringer at Bloomberg Businessweek comes this story of insurance companies behaving badly in a Michigan case: After a paralyzed man was hit by an SUV while crossing a street with his mobility scooter, two insurance companies are claiming that since the man's scooter was uninsured, they shouldn't have to pay any damages for his injuries. Also, since this isn't quite bizarre enough, no insurers in Michigan actually offer vehicle insurance for mobility scooters. Who's the law firm here, Yossarian, Cathcart and Scheisskopf?

Under Michigan's no-fault insurance law, drivers without auto insurance are not eligible to collect any damages if they're in an accident, so not having "auto" insurance on a wheelchair or scooter would make the accident victim ineligible. The insurance companies in the case, State Farm and Farm Bureau, are venturing into creative new legal ground, a term of art meaning "mendacious assholery the likes of which have never been seen." Stephen Gursten, a lawyer and lawblogger, says that in his 20 years of practice in No Fault insurance law in Michigan, this was among the most "shameful, under-handed and heartless arguments" he's seen made by an insurance company. He told Businessweek,

“If they pull this off in Michigan, you will start to see this all over the country ... For every person dependent on a motorized scooter or wheelchair for transportation, God help them if they get hit by a car.”

OK, but dude, you just admitted that they're "transportation," so thanks a lot. They're just like little cars, now aren't they? Which is what State Farm is literally arguing:

In April, State Farm argued that Veness’s complaint should be dismissed because his scooter should be considered “a sophisticated motor vehicle” that is operated by power other than muscle power and has more than two wheels—and therefore should have been insured like a car. Because it wasn’t insured, he is not entitled to make a claim, the insurer said.

We suppose that it might be worth arguing that in general, you just don't get the option of driving a "motor vehicle" into a donut shop, which was accident victim George Veness's destination when he was hit by the SUV. But we are neither lawyers nor scum-sucking insurance companies, so we don't know whether that would count for anything.

Harold Perakis, the attorney for Mr. Veness, says that he's been informed by the attorney for State Farm that the company would withdraw the motion to dismiss, but the insurance company still refuses to pay Veness's claim, and it may bring up the argument again at trial.

All we need now is to wait a little while, and this story will no doubt be turned into a wingnut chain email about how Obama is going to require every scooter user to buy car insurance. Which nobody sells for scooters.

Follow Doktor Zoom on Twitter. He is pleased to have written a Wonkette story about mobility scooters that has nothing to do with Tea Party protestors.