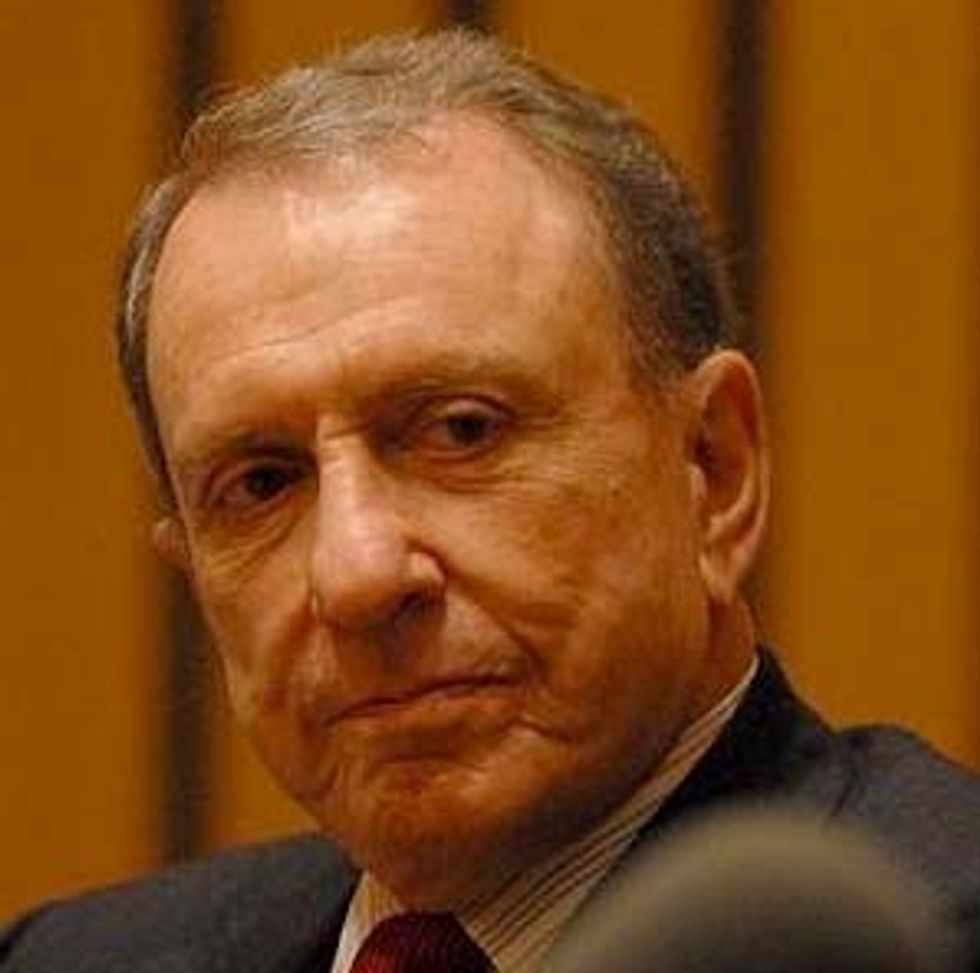 By the Comics Curmudgeon
Our political class is no mere machine, with individuals just cogs within it; no, our leaders can exercise free will and make decisions almost on a whim that have far-reaching implications, and this week one man has made just such a choice. I'm talking, of course, about David Souter, but that just happened last night, so the political cartoonists are just now recovering from their hangovers (Thursday is the new Friday!) and starting to tackle that topic. (They will depict him as returning to a sad, empty home, because they are cruel bastards.) Anyway here's a bunch of drawings about Arlen Specter changing parties or whatever instead.

Now, your Cartoon Violence columnist is one of those terrible critics who is completely unskilled in the medium that he criticizes -- I can't draw a lick, to put it plainly. Nevertheless, Specter seems pretty caricaturable, am I right? It's the eyes, the beady, shifty eyes, that are, for me, his defining feature. They manage to simultaneously look melancholy and slightly pissy, as if he's very sad that the Warren Commission couldn't reveal the CIA-UFO conspiracy that killed Kennedy, but don't go running your mouth off about it, buddy.

Sadly, only one cartoon out of the batch churned out in the wake of his flip-floppery really seemed to capture his sinister eyes properly, and that's this one by David Horsey (click it, and all other cartoons, to make them larger):

Even here, it's more like he's just casting a jaundiced eye on the obese, tent-clad elephant away from which he's hiking vigorously. And wouldn't you? We all know that the mighty GOP pachyderm-symbol, like the party he represents, has grabby hands (or a grabby trunk, maybe), and you would not want to spend a night in a tent with him. Also worth noting here is the attention Mr. Horsey has applied to the details of Specter's camping accoutrements, including his plaid shirt and down vest and walkin' stick. Kudos to you, sir! Unfortunately, your fellow members of the cartooning fraternity did not do as well.

Here you have a mostly unrecognizable, and thus helpfully labeled, Arlen Specter. He's been taken out by the GOP and put in the trash can! Now he's sitting in a can of festering garbage, with rotting banana peels and apple cores, and flies, and stink lines. I guess those Republicans showed him, huh? And now he's trying to make some sort of claim that he's the one who quit, but we all know that he didn't, that the Republicans threw him out in a move to clean house, right? Right? That's how it went down? Oh, wait, it didn't? This cartoon has no basis in reality at all? Oh, all right then.

(Also not based in reality is that recycling bin. Because we all know the GOP elephant would just take those cans and throw them directly into a river, right?)

Much more accurate is this depiction of a bald-headed, plaid-suited Specter-homunculus, sliding rapidly away from the crotch of the GOP elephant. I propose two possible explanations for this baffling image, both more or less equally distasteful:

This cartoon manages to avoid drawing Specter at all, but in the process becomes tangled up in philosophical dilemmas about how a static image can represent the progression of time. Specifically, we see the awkward moment just after Specter fled the Senate Republican caucus's underground sex dungeon; how can we make clear the fact that it is our boy Arlen who has just slammed the door behind him? The solution arrived at here -- to have a random slip of paper labeled "Specter" sort of drifting in the air around the doorway -- is not, I am sorry to say, particularly elegant.

The actual content of the cartoon is laughably inaccurate as well; everyone knows that the GOP's kinky S&M parties have for years now been the only thing keeping Specter a Republican.