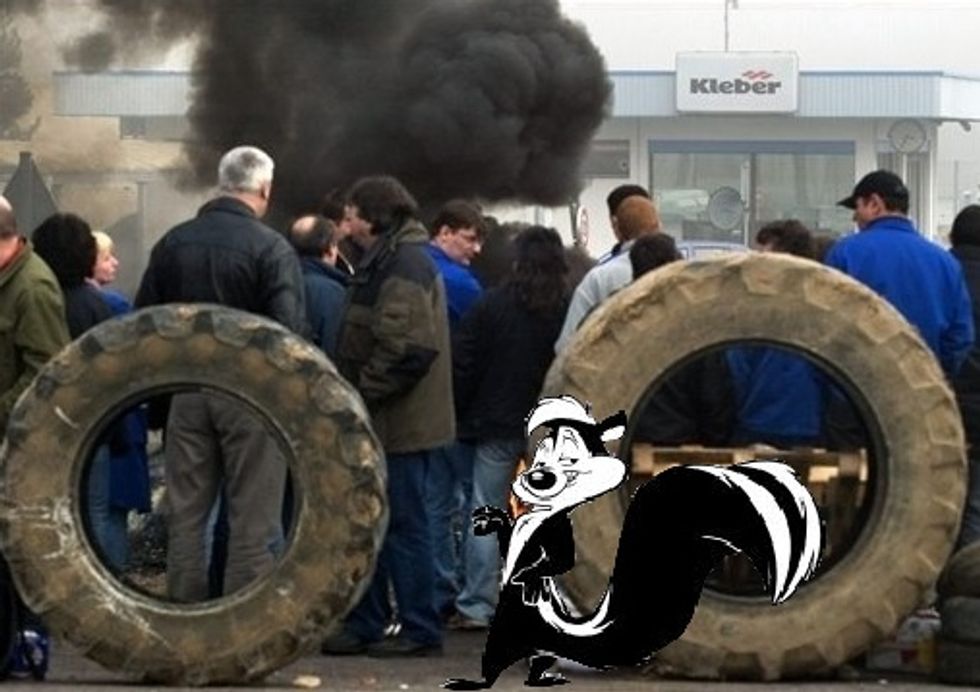 Workers at a French tyre factory threatened with closure have taken two company executives hostage and promised to hold them until given "enormous amounts of money".

The two managers were scheduled to meet with union representatives Monday at the Goodyear factory in north Amiens, but instead about 200 workers showed up and blocked the door of the conference room with a huge tractor tire.

It's still not lopping off heads, but yes, definitely closer to class war, we would say, n'est-ce pas? Also, Yr Wonkette fully endorses the use of big honkin' tractor tires as tools of class struggle.

The two executives, production manager Michel Dheilly and human resources director Bernard Glesser, were released unharmed Tuesday morning. The tire factory is scheduled to close, which would put 1,173 workers out of work. Union leaders hopethat the factory can be sold and kept open, or at least that a decent severance package will be provided, according to union representative Franck Jurek, who said Monday that workers were prepared to bring mattresses to the factory to occupy it until a settlement is reached:

"We want to go back to the negotiating table to seek a voluntary departure plan and see if someone will take it [the factory] over. If there's nobody, then [we want] a departure plan for everyone with an enormous amount of money."

This is the same factory an American executive derided last year; when a French official wrote to Maurice "Morry" Taylor Jr, head of Titan International, asking if Titan would consider buying the plant, Taylor wrote back,

"Do you think we're stupid? I've visited this factory several times. The French workers are paid high wages but only work three hours. They have one hour for their lunch, they talk for three hours and they work for three hours."

He added: "You can keep your so called 'workers'."

So you can see why they might be a little touchy; the French workers kept insisting on a living wage and decent working conditions, and so of course, that makes them "lazy." Heck, they're lucky they weren't also diagnosed as "uppity."

Despite the demand for "enormous amounts of money," workers at the Amiens factory actually seem resigned to the plant's eventual closing, according to CNBC; they're asking for

management to improve on one of its previous offers and give severance packages of up to 180,000 euros ($245,000). They also want access to job re-training benefits for 24 months rather than the 15 currently proposed.

Let's hope that they get a decent deal; we're also hoping that American workers will start taking note of where they can get their hands on some tractor tires.