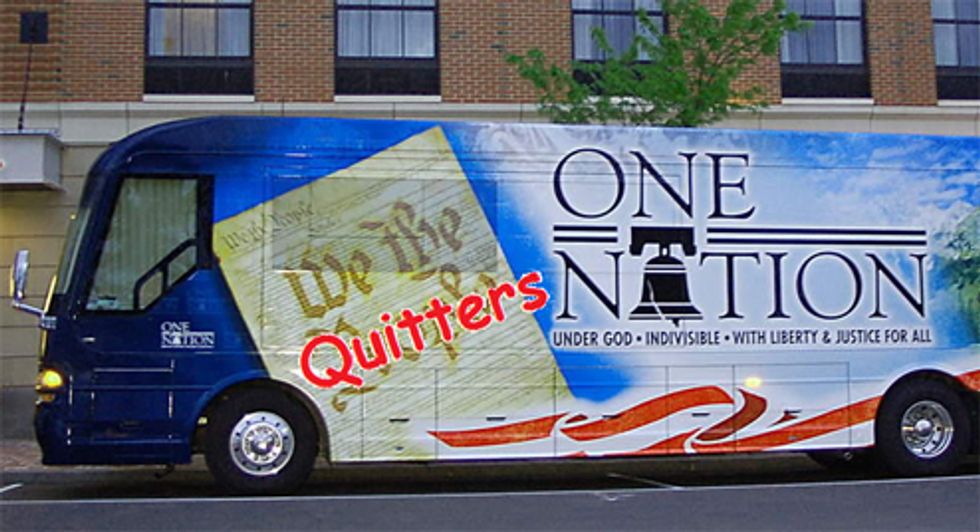 We have News of the Grifter for your weekend contemplation: Sarah Palin is going to start an all-new digital teevee channel with the working name "Rogue TV,"according to an anonymous source who is familiar with the project. Also, if you want to buy her old not-a-campaign bus from the "One Nation" tour that she abandoned partway through the 2012 campaign season, that's for sale, too.

According to Capital New York, the bigtime teevee channel will be available through Tapp, a digital video service that we've never heard of but is apparently a real thing, and will launch in April or May, for sure. it sounds like it's well worth the $10 a month subscription price (is that for Tapp, or just for the Sarah Channel? We don't know!):

“Think of it as a video version of her Facebook page,” the source said.

We'll just wait until the content makes it to the YouTubes, we think.

The source also suggested that the channel might also include "advice and guidance from Palin, such as tips for parents and recipes," which sounds pretty much irresistible, and the hope to have interactive chats with Palin, or maybe with a Max-Headroom type simulation. The key will be in determining whether the real or virtual Palin comes closer to passing a Turing test.

We also learn, from The Week, that Palin is selling her big, big bus for a mere $279,000. It includes all the stuff you'd expect in a luxury travel coach, plus the ineffable aura of braggadocio and self-righteousness that has undoubtedly permeated the vehicle.

On Facebook, Todd notes that it's just more vehicle than they really need, but they will be replacing the bus with a smaller motorhome, the kind that

"Grandma Sarah" feels more comfortable driving. She loves to drive and really admires those hardcore lady RVers who maneuver their rigs and even haul trailers behind, but Sarah humbly admits there must be a better way than her white-knuckling on the highways behind the wheel of our Lexa. A smaller rig may do the trick for her.

No word yet on whether it's technically feasible to remove the stain of failure from the upholstery.