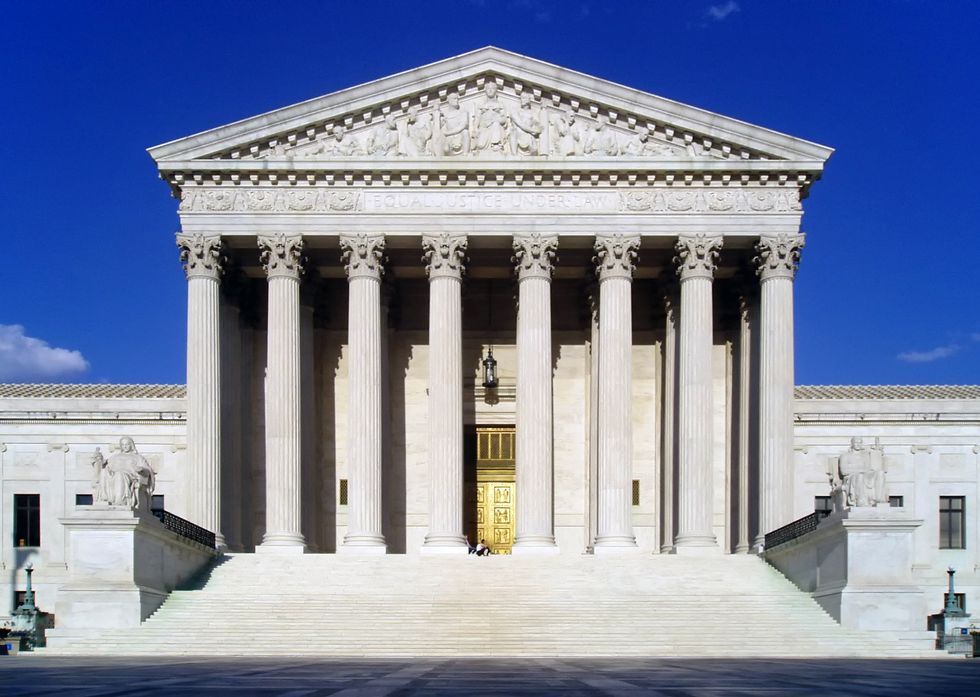 The future of reproductive rights is up in the air this week, as the Supreme Court hears arguments in Dobbs v. Jackson Women's Health Organization, and gets ready to decide whether or not to overturn Roe v. Wade. It's not looking real good! The conservative justices have been telegraphing their plays all over the place and are making it pretty clear they are looking for a reason, any reason, to say "fuck precedent," overturn the 1973 decision, and just let states go ahead and ban abortion. Or birth control. Or invading people's private lives and private decisions in anyway they deem appropriate.

Brett Kavanaugh, who supposedly assured Susan Collins that he believed Roe was settled law, spent quite a good deal of time explaining why he wasn't actually all that into "settled law."

Kavanaugh listed several of the Supreme Court's major rulings, including Brown v. Board of Education, which found unconstitutional racial segregation in schools, and Obergefell v. Hodges, which legalized same-sex marriage, to demonstrate that the court has overruled precedent, as it is being asked to do in the Mississippi dispute.

"If we think that the prior precedents are seriously wrong, if that, why then doesn't the history of this court's practice with respect to those cases tell us that the right answer is actually a return to the position of neutrality and not stick with those precedents in the same way that all those other cases didn't?" Kavanaugh said, noting that if the Supreme Court had adhered to precedent in those cases, "the country would be a much different place."

Those decisions were quite different in many ways, one of them being the idea that anyone having "come to rely" on them being in place the way those of us who can get pregnant have come to rely on Roe being in place is absolutely absurd. No one had planned their life on the expectation that someone they don't know would not be allowed to get married or even the expectation that their children would be allowed to attend racist schools — although it was certainly a boon for the private "Christian" school industry when school segregation was putatively outlawed. People have, however, absolutely built their lives with the expectation that they will be allowed to control their own reproductive futures.

At one point during the hearing, Chief Justice John Roberts asked, "Why would 15 weeks be an inappropriate line? ... Viability it seems to me doesn't have anything to do with choice. But if it really is an issue about choice, why is 15 weeks not enough time?"

"Viability," or when a fetus can survive outside the mother's body, averages 23 or 24 weeks — an extra two months from Mississippi's proposed cutoff. I think it's a reasonable, balanced standard, if there are exceptions for fetuses with terrible abnormalities that would only cause a brief life of pain. Many people still don't know they're pregnant at three months, and 15 weeks is based on nothing but an arbitrary number.

That he doesn't know the answer to this himself certainly does not bode well for the future of reproductive rights in the United States (and also suggests that he did not pay a whole lot of attention to his own wife during her two pregnancies). He and the other conservative justices are on the verge of making a decision that will affect half the country without considering what any of it actually means other than "Oh, the anti-choice people will be so happy about getting to force other people they don't know to give birth against their will!"

While there are many reasons for why abortions should be allowed after 15 weeks, including a person just deciding that they do not want to give birth or have a child, a pretty big one is the fact that the multiple marker test for chromosomal abnormalities is conducted between 15-20 weeks into a pregnancy. This is the test that determines if a child has Down syndrome or Edwards syndrome — a diagnosis that is nearly always fatal either before or soon after birth. Tests for Tay-Sachs are done at around 15-18 weeks. Tests for other severe birth defects — such as anencephaly or exencephaly which are always fatal — are conducted between 18-22 weeks. One woman in Ireland didn't find out that her child had thanatophoric dysplasia until 23 weeks into her pregnancy and that upon taking her first breath, her daughter would "die from respiratory failure as her chest cavity would crush her lungs."

It may be a crass thing to bring up, but it feels important to note that we do not have universal health care in this country. We do not have parental leave in this country. This is not a pitch for Medicare for All or other social programs, it is a fact. It is unbelievably expensive to give birth here, even, in many cases, with health insurance, and without complications. In Mississippi, the average cost of a vaginal birth without complications to a mother with health insurance is $6,545.41. That is a pretty big deal in a state where the median income for individuals is $24,369.

Oh, and if we're talking adoption? A private adoption through an agency can cost parents from $60,000-$70,000 due to lawyers fees, physicians fees, and living expenses for the birth mother — costs which are unlikely to go down due to increased "supply." How many people can afford that and then the subsequent cost of actually raising a child?

The fact is, as important as bodily autonomy is and as horrific as it is that so many are going to lose theirs, there are a whole lot of practical concerns here and there's going to be a whole lot of fallout as a result of Roe being overturned. It's going to be very bad. If states are allowed to meddle in the personal medical decisions of citizens as it concerns abortion, who is to say they can't get involved in other personal decisions, medical and otherwise?

Another major concern, as Justices Sonia Sotomayor and Elena Kagan pointed out, is that the Supreme Court will lose the ability to claim that it is not just another political institution that will change significantly depending on whoever is on it at the time.

Justice Sonia Sotomayor noted that in the years since Roe and Casey, 15 justices have reaffirmed the viability line, while four — two of whom currently sit on the court — disagree with the standard.

"Will this institution survive the stench that this creates in the public perception, that the Constitution and its reading are just political acts?" she asked. "I don't see how it's possible."

If that is the case, which it appears to be, it is unclear what purpose the Court actually even serves. It also removes any argument against President Joe Biden packing the court, because if it is now agreed upon that the court is meant to be partisan, and meant to achieve the goals of whichever party nominated the most judges, instead of just adhering to the Constitution and court precedent, then why shouldn't he?

If we somehow don't lose Roe, it will be a great day for all of America — including, quite frankly, many of those who oppose it without realizing why it would be bad for the Supreme Court to overturn it. But we probably will, and it's not going to be very pretty.