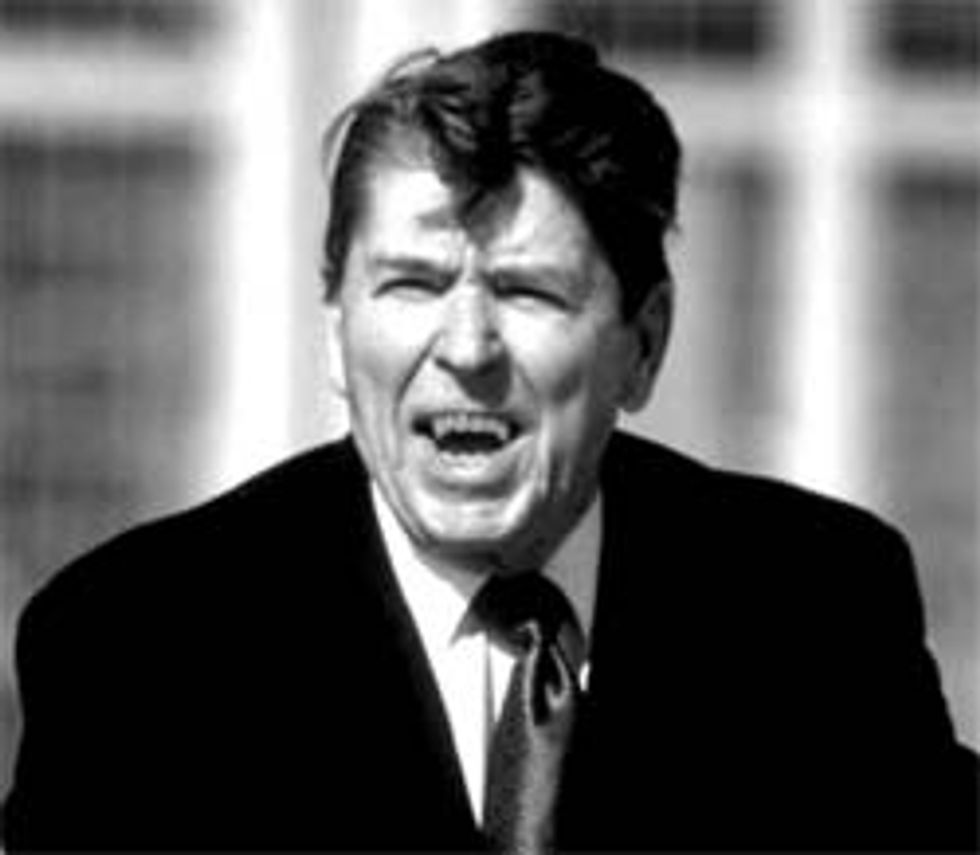 Let us tell you an instructive moral fable: Once upon a time there was a President, America's Greatest, who was so Great that even though a crazy person shot him, and he bled profusely, he did not die, but went to stay president for years and years and years and fix all of our problems. And all the members of the medical team that worked to save the president's life recognized his Greatness, but in some ways they were like children, feeling the warmth of his glowing Greatness without having the intellectual equipment to understand his Message. That's why one lab technician took home a few drops of his blood, squirreling it away to worship it dumbly like a bogus relic from some Papist saint. It took until a generation had passed before someone had the Wisdom to know what the president would have really wanted: for that blood to go up on the open market, with the Invisible Hand determining its value. Why are so many communists so determined to stop you from buying Ronald Reagan's blood?

So there is a vial containing a few drops of Reagan-blood that a lady took from a medical lab in Columbia (with the permission of her supervisor!) in 1981, and it was the only thing the family owned that one anonymous and enterprising anonymous son wanted to inherit, because he loved Ronald Reagan, and making money, and making money from Ronald Reagan's dried blood. But what happened when he finally tried to put this plan into operation?

About 3 to 4 months ago, I contacted the Reagan National Library and spoke to the head of the library, a Federal Agent. I told him what I had, how I came across it and so on. We spoke for about 45 minutes. The reason that I contacted the Reagan National Library was to see if they would like to purchase it from me. He indicated that if I was interested in donating it he would see to it that he would take care of all of the arrangements.

Is the head librarian at the Reagan Library really a Federal Agent? Does he, as a result, have the power to call in the Black Helicopters, who are always looking to crush freedom? Answer: apparently yes!

Prior to hanging up the phone, he said to me, do me a favor, don't move from where you are, I will call you back within 30 minutes but I have to make a couple of phone calls to seek legal counsel, consult with National Archives, the FBI and other three or four letter agencies that I have heard of. I said am I in any kind of trouble or will there be some black cars/suv's or helicopters hovering above my home and he said not yet but possibly in the very near future depending on what he learned from the phone calls he had to make. told him alright, I will not move from where I was sitting and would await his return call.

You have to admire this fellow's commitment to Reaganism. After all, Ronald Reagan promised a return to law and order after the chaos of the '60s, and helped expand the national security state, for the benefit of all mankind. If that meant that someone could be whisked away to a secret CIA torture center just for trying to sell a vial of Reagan's blood, then so be it, he'll just wait by the phone, waiting for the head librarian to trace the call back to his address.

He called back in 25 minutes and said that everything was ok, National Archives was not interested in what I had, nor was the Secret Service, the FBI and other agencies. Since 30 years had passed by, he thought that it was simply something that was of no importance at this time and that I was free to do with whatever I wanted with it. He then stated that he felt the family would be interested in it being returned to them and if I was interested in doing so to contact him and he would make all of the arrangements. I told him that I didn't think that was something that I was going to consider, since I had served under Pres. Reagan when he was my Commander in Chief when I was in the ARMY from '87-'91 and that I was a real fan of Reaganomics and felt that Pres. Reagan himself would rather see me sell it rather than donating it.

If there's one thing this man's commander-in-chief would say if he rose from the grave, it would be "Fuck my family, I never liked them. Get money, son. GET MONEY." So he bypassed eBay, which is based in Communist California, and instead set up an auction on PFCAuctions, a site based on Guernsey, which is one of Queen Elizabeth's private islands and is therefore not subject to human law. You can read the whole dramatic story of Reagan's Blood there, and even put in a bid to buy it yourself, if you have $10,000 or so! Now predictably all the Reagan Foundation people are outraged, even though they had their chance to stop this from happening by buying it themselves, how is it that they don't even understand how the market works. [PFCAUctions/Daily Telegraph]