Sorry, Rick Perry, No Hand Cannon For You! 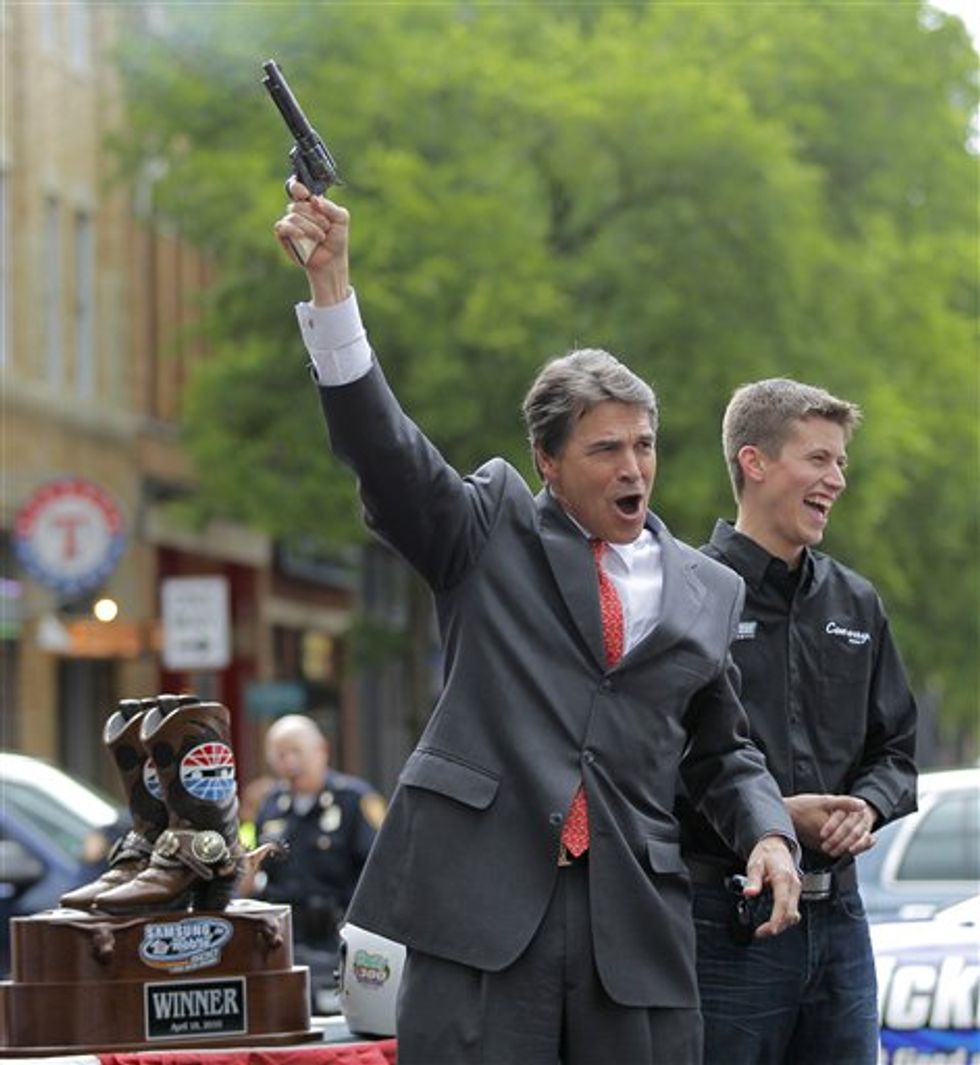 Indicted war criminal Rick Perry may face a fate far worse thanlynching -- he may face separation from his precious beloved guns! while he awaits a conclusion of the case against him. Or at least he's had some of his precious gun rights limited, which is the same as burying the Second Amendment altogether. According to the Austin American-Statesman (paywalled, but you good Wonkers are WORTH 99 cents!), federal law specifies:

“It shall be unlawful for any person to sell or otherwise dispose of any firearm or ammunition to any person knowing or having reasonable cause to believe that such person (1) is under indictment for, or has been convicted in any court of a crime punishable by imprisonment for a term exceeding one year.”

And since one of the charges could potentially carry a sentence of 99 years, Gov. Goodhair can kiss that Christmas Desert Eagle goodbye, maybe, as well as the hollowpoint ammo stocking stuffers. Worse still, his Texas Concealed Carry permit is also suspended until the case is resolved, so he may as well just be naked. You in the back, stop panting, OK?

Edwin Walker, a Houston attorney who represents gun owners -- yes, you can build a practice on that in Texas -- told the American-Statesman that Perry can keep all the guns he has, but he can't get any new ones, and he can't carry concealed. No restrictions on long guns that he already owns, though, so he can sling an AR-15 over his shoulder and walk into any Chipotle or Target that will have him.

And, [Walker] noted, Perry can no longer carry a handgun while jogging on public property, as he was doing when he famously gunned down a menacing coyote in 2010.

Thank heavens we can link you to the epic Wonket story about that, free for nothing! Not that we mind having paid 99 cents for that Austin American-Statesmen story; we just didn't see the need to give 'em our phone number, so we typed in the number for the office of Idaho Gov. Butch Otter. Let them get the subscription robocalls.

If INDICTED Gov. Perry actually is convicted, he would lose his guns altogether, which is what fellow Texas mugshot hall of famer Tom DeLay considered the worst deprivation of all.