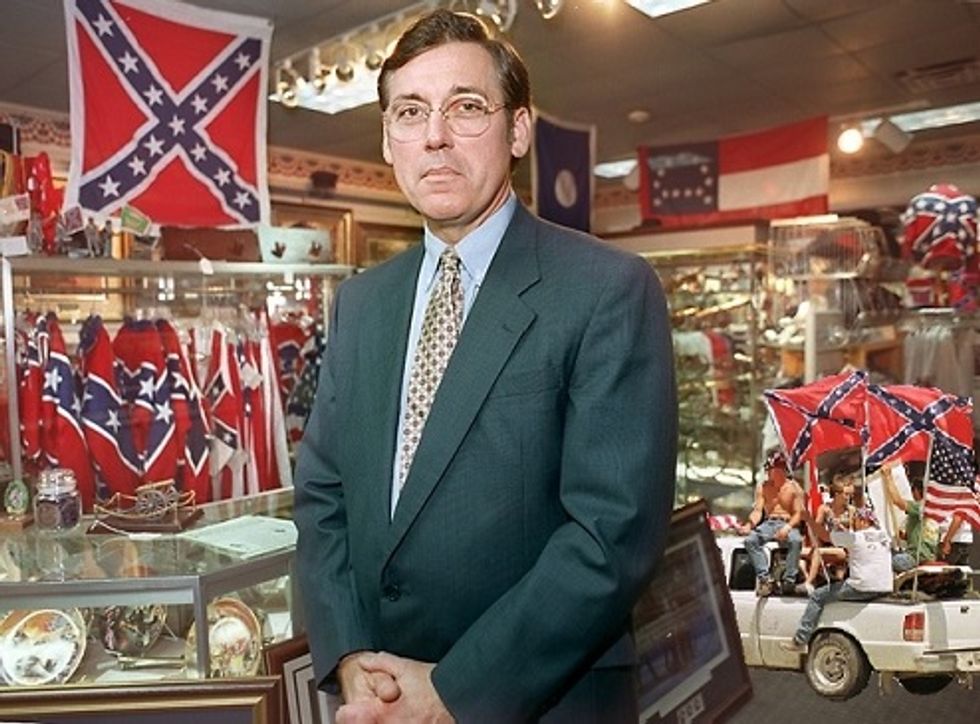 South Carolina Lt. Gov. Glenn McConnellannounced today that he won't run for reelection so that he can become president of the College of Charleston. He'd make an awesome college president, since he's an alum of Charleston, and really smart, and very much in touch with Southern Heritage, especially with his warm embrace of the Confederacy and his experience running a store -- "CSA Galleries" -- that sold Confederate flags and other Johnny Reb tchotchkes. As a state senator, he was one of the leading defenders of keeping the Confederate flag flying from the Capitol building, because it's about heritage, not hate. And in the late 1990s, he insisted that giving up symbols of the Old South would be a form of "cultural genocide," one of the shibboleths of the neoconfederate crowd. He seems nice, and just the man to present a welcoming image for a college that has some of the state's lowest minority enrollment.

But make no mistake, McConnell is very much aware that racism is a thing of the past, which may be why he enjoys Civil War cosplay so much. Oh sure, he'd say it's "reenactment," but we say he's no different from a really devoted InuYasha fan, except for how half-demon wolfmen during the Edo period did not keep slaves. Why, here's a photo of just how much Glenn McConnell got into character at a charming “A Southern Experience” cocktail party that the National Federation of Republican Women held a few years back. McConnell's the one who isn't a black person hired for the day to dress as a slave:

That party even included a "live auction!" Gosh, we can only imagine the fun parties he could hold at the College of Charleston!

Needless to say, other white Republicans think he'd be a fantastic college president, because Heritage. State Rep. Jim Merrill says that McConnell's love for the government that seceded and went to war with the United States to preserve its unique cultural heritage (of owning human beings as slaves) shouldn't be a problem at all:

"Anyone who would talk about his support of his Southern heritage as a detriment is ignorant. It's awful."

Why, even state Sen. Darrell Jackson, a black Democrat, thinks McConnell would be an excellent ambassador to The Blacks:

"If Glenn McConnell become president of the College of Charleston, the African-American community could have no better friend," he said ...

"There are two kinds of people who are enamored with the Confederacy," Jackson said. People like McConnell are focused on historical aspects, according to Jackson, who said McConnell is not part of the other group, who are rednecks who want power over others.

Well that sure is reassuring! And Jackson notes that McConnell worked hard to add a monument to African-Americans at the state Capitol, to balance out the one to Confederate soldiers who went to war with the United States of America, and that McConnell also helped ensure that a share of lottery funds went to historically black colleges in the state.

Even so, some of The Blacks are less than enthusiastic, possibly because they don't know what a fine fellow he is, and haven't personally worked with him in the senate or at Dress Like A Confederate Or Slave parties. For instance, take Dot Scott, president of the Charleston NAACP, whose name is really fun to say aloud if you are a bit simple like Yr Wonkette. She says that while she doesn't know Lt. Gov. McConnell well, his reputation as a huge defender of the Confederate flag precedes him:

Many at the school are sincere in their intention to boost diversity, she said. If the school hired McConnell, she said, "that's not going to send a signal that we're moving forward" ...

If the college wants to improve diversity, she said, it should hire someone who has a record of doing that. That's important if the school wants to meet its goal, she said. "A lot of minority students just don't feel welcome there."

Look, we bet if they'd just dress up as slaves -- or even perhaps as indentured servants -- and come to one of McConnell's parties, they'd come to appreciate him in a whole new way.