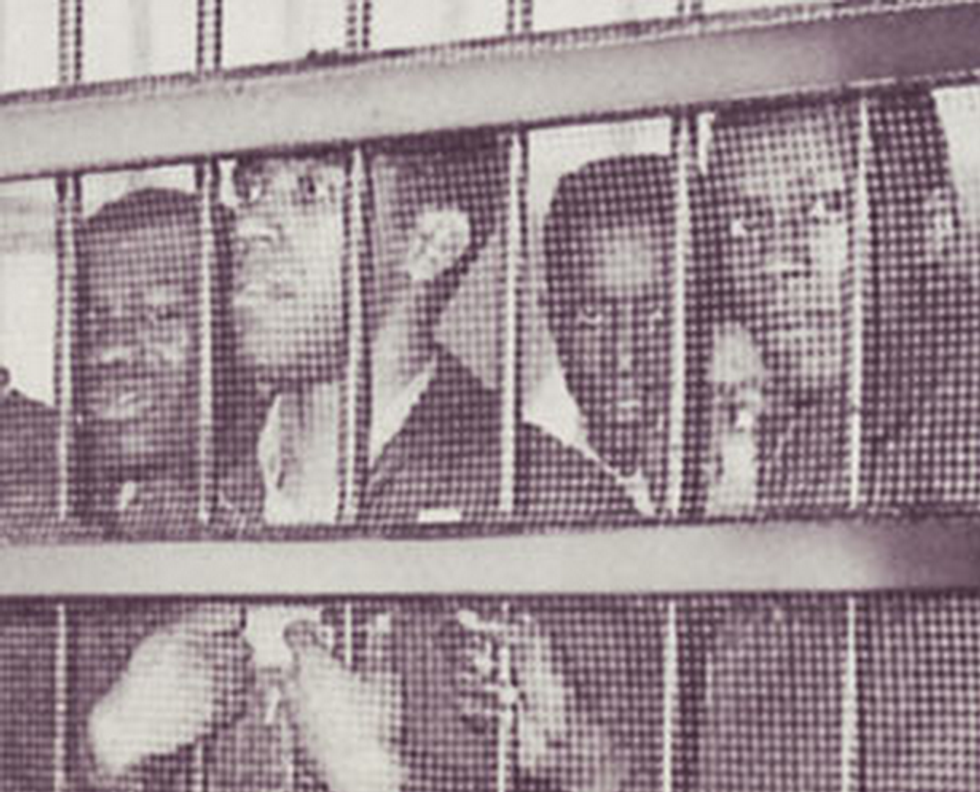 The town of Rock Hill, South Carolina, took a step to right an injustice from the Civil Rights era, vacating the 1961 trespassing convictions of nine protesters who spent 30 days on a chain gang for attempting to sit at a whites-only lunch counter in McCrory's Drug Store. The eight surviving members of the group, who were all students at Friendship College in 1961, had their convictions overturned by Circuit Court Judge John C. Hayes III, who is the nephew of the judge who sent them to jail in 1961.

Their case was a pivotal moment in the Civil Rights movement, because they refused the NAACP's offer to pay their bail, which started the "Jail, No Bail" strategy for civil rights protesters. Rather than pay the state, they decided instead to go ahead and let the county sentence them to working on a chain gang, highlighting the stupidity of the segregation system. The tactic was then adopted by other protesters, forcing segregationists to pay the costs of jailing tens of thousands of people for the crime of seeking equality:

Professor Adolphus Belk, Jr., of Winthrop University, said the decision by the Friendship Nine to not pay the fines inspired and rescued the civil rights movement, which was running out of funds from paying so much bail money.

"Rather than assuming the financial responsibility of paying that fine, it shifted it to the system," Belk said. "I suspect if the Friendship Nine didn't do what they did in January, 1961, the sit-in movement would have died."

Thanks to the City of Rock Hill and the Rock Hill Herald, we captured the streaming video of the hearing for you. You may want to have a hankie handy, as invisible ninjas may start cutting onions while you watch these men in their 70s stand up as a court official reads the original charges and sentences from the 1961 court docket:

The Friendship 9 were represented in the hearing by retired South Carolina Supreme Court Chief Justice Ernest A. Finney Jr., who had originally defended them in 1961. He needed a little help to get to his feet, but read the motion clearly,

"These courageous and determined South Carolinians have shown by their conduct and their faith the relief that they seek should be granted." Finney thanked the 16th Circuit Court's office for its help in arranging the hearing, and asked that the Court's decision "show the resolve of South Carolina to work together, to learn together, and to progress together, and to ensure the promise set forth in our Constitution that all men are equal under the law."

Solicitor Kevin Brackett then said that he would be quite happy to "just say 'I agree' and sit down," to which judge Hayes added "That's what I always do" for Chief Justice Finney, which got some laughs from the standing-room only audience. He then recounted the events of the January 31, 1961 sit-in, concluding,

The record is abundantly clear. There is only one reason these men were arrested, there is only one reason that they were charged and convicted for trespassing, and that is because they were black. That could not happen today. It was wrong then, it's wrong today, and these convictions if they are allowed to stand would be an offence to justice, and they must be vacated, and the charges must be dismissed.

Brackett said that he could stop with that, but added that he needed to say more. In addition to recognizing the Friendship Nine, he also called attention to their fellow protester David Boone, also present for the hearing, who wasn't arrested in 1961 because he was white. Brackett then turned to the men and apologized to them on behalf of the state, to the applause of the audience. Brackett then added,

Apologizing isn't enough, either: our community here and our country is a better place because of what you all did. You all sacrificed your own freedom to make our country better by making a statement about how segregation was unjust and wrong. It's a better place for me, it's a better place for my daughter, and for that, I owe you my thanks. Two years after you finished serving your sentences, sitting in a jail cell in Birmingham, Alabama, Martin Luther King Jr. [wrote] ... "one day the South will recognize that the men who are engaging in these activities are heroes. One day they will be recognized as the heroes that they are." I have absolutely no doubt that as his pen formed those words, he was thinking of these men right here ... on behalf of the State, I am glad that that day has come. You are my heroes.

Judge Hayes then granted the motion to vacate the convictions, noting that the evidence used to convict the men in 1961 was "patently flawed, unjust, and anathema to society's evolved recognition of the illegality of laws which perpetuate segregation." Noting that "we cannot rewrite history, but we can right history," Hayes vacated the convictions and dismissed all charges against the men, to a standing ovation.

For the sake of historical preservation, Brackett and the defense agreed that the state should vary from its usual practice in the handling of overturned convictions: Instead of expunging the original court records, the original court documents will be preserved, with a copy of Judge Hayes's order added to the originals.

And there's your bit of justice for today. That's some arc, that moral arc of the universe. It's the best there is.